Hey, I'm quite in my Retro machines. I have a large number in the loft. Ranging from 386s, Pentium classics, P2, P3 - all the way up to Althon XP/P4 Era. I've taken a little break from the Retro scene, but over the past few months found myself wanting to get another build together.

I wanted to put together a dedicated DOS machine for my vast collection of DOS Games.

I bought a used AT Intel Pentium MMX 233mhz machine a while back. It's probably the least used machine of them all! I remember powering it up and it went back into the loft. Had a number of builds going on at the time. Well, I've decided to get it down and it's actually not in good shape. The front panel has yellowed quite badly and the bottom has Rust forming on it (Not from my ownership, my loft is watertight) Time for some work! 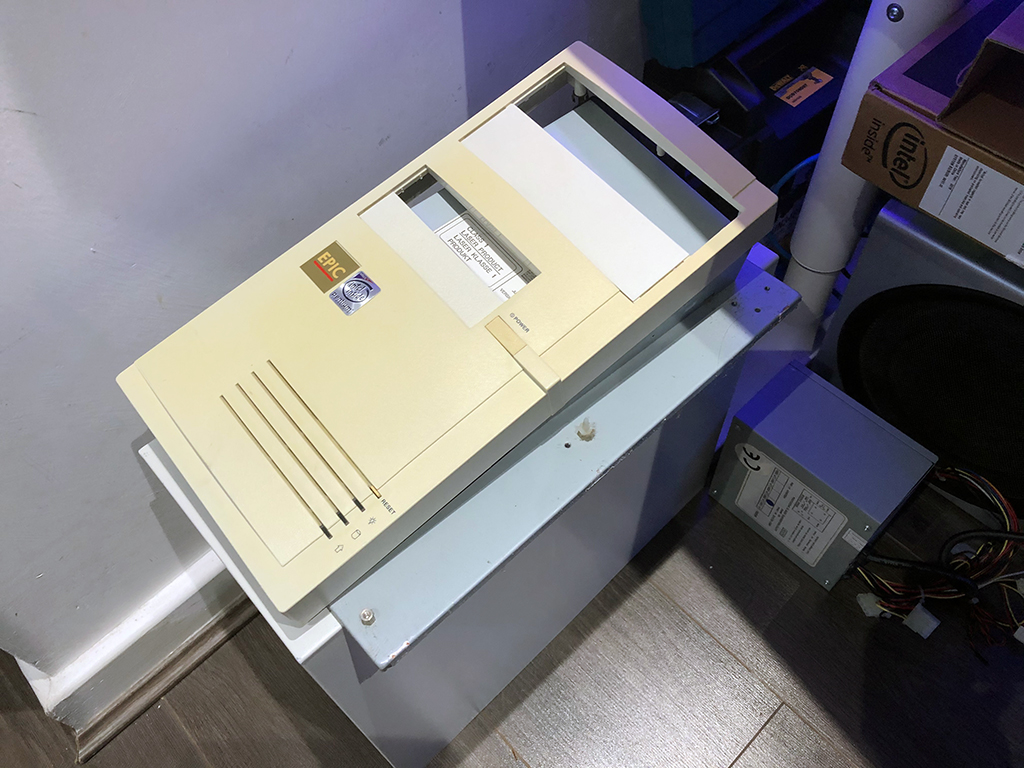 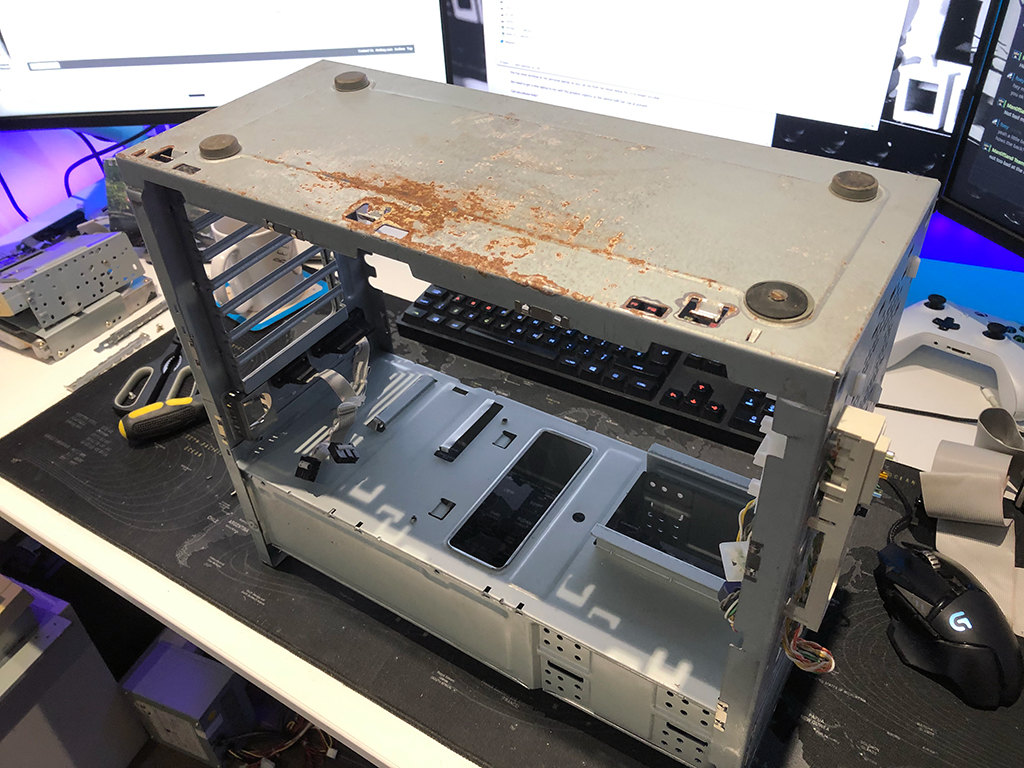 So I stripped the power down cleaned everything, it was filthy and started to tackle the rust! 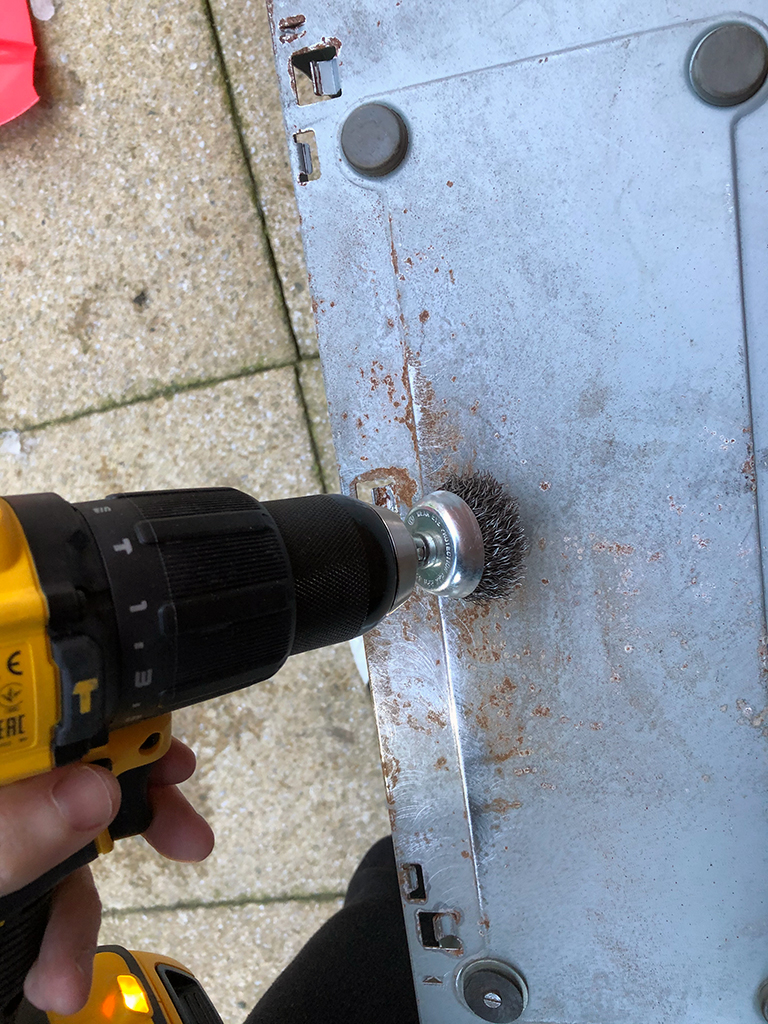 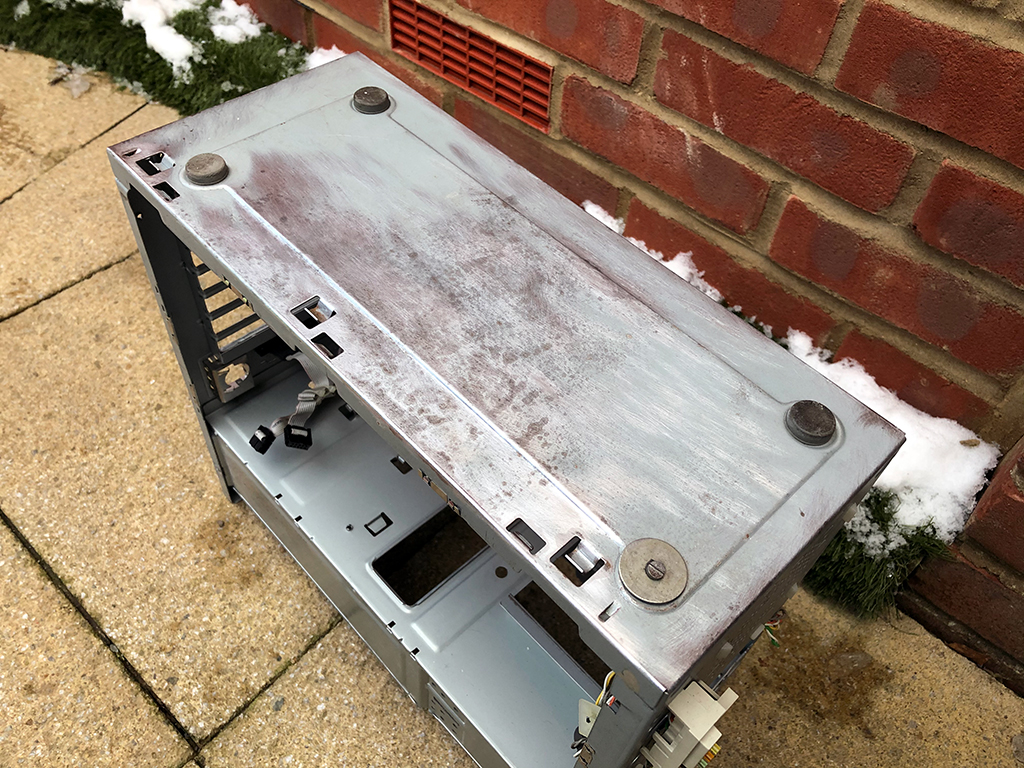 Time for some Rust Converter. I used a product called Krust. You basically paint onto the affected areas and leave until dry 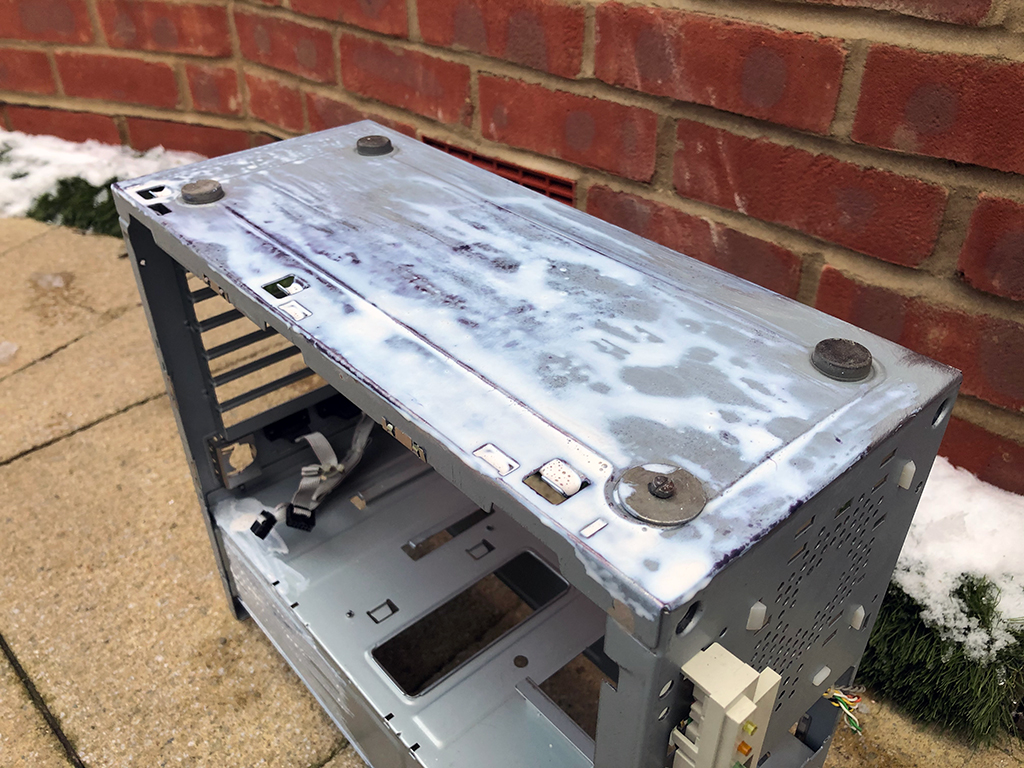 After it dried, more wirewheel treatmeant, I also removed the old Case feet this time. 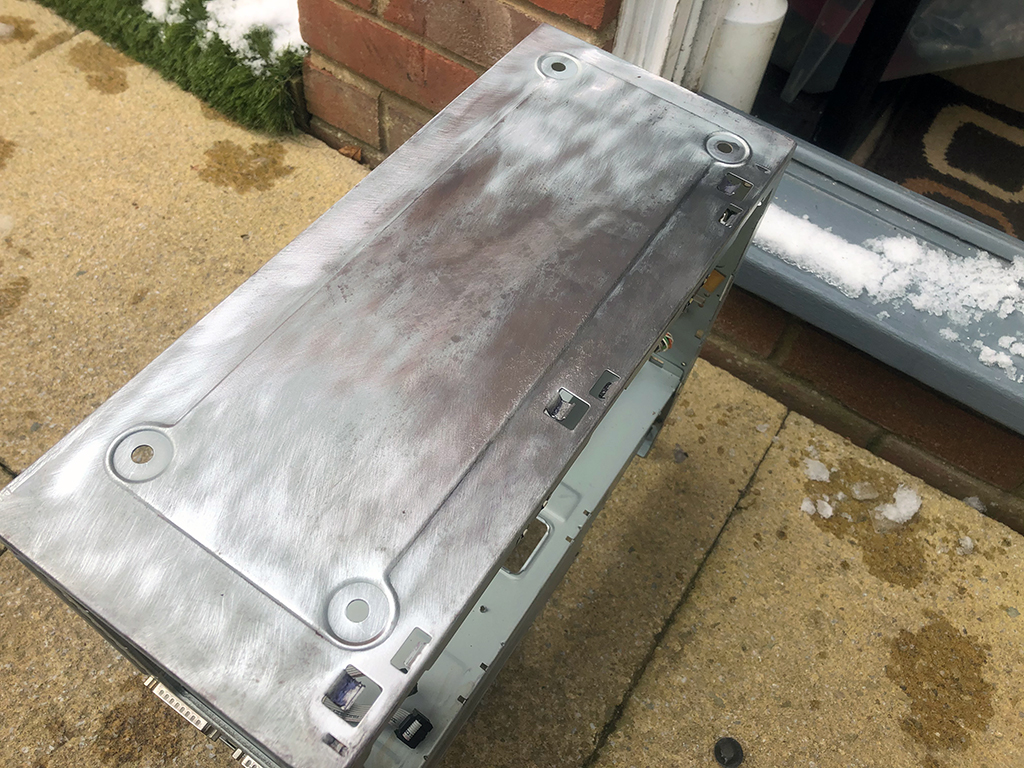 One I was happy with the finish, I had a can of BMW Silver Meltalic paint in the garage I bought for a project which never happened which would suit. A couple of coats in freezing cold conditions, it actually came out quite well (Wet paint in the photo!) 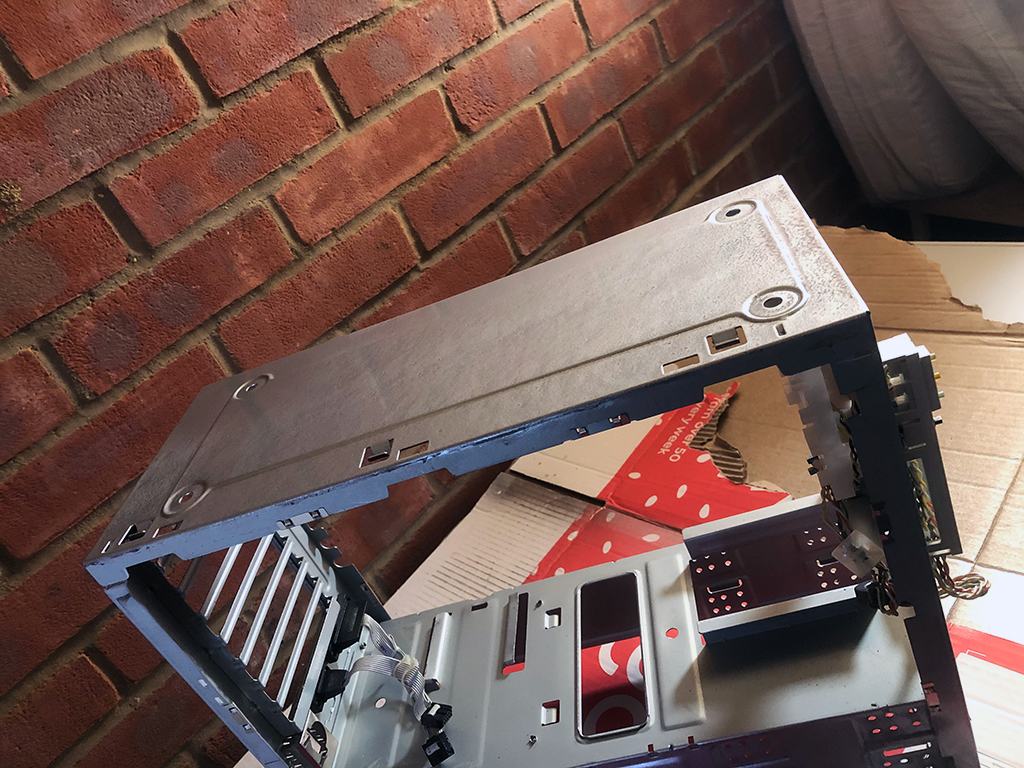 On to rebuilding, Once everything was clean I started to piece it all back together.

I really like this AB-PX5 motherboard. Pretty much jumperless and support a vast range of processors.
New BIOS Battery installed. 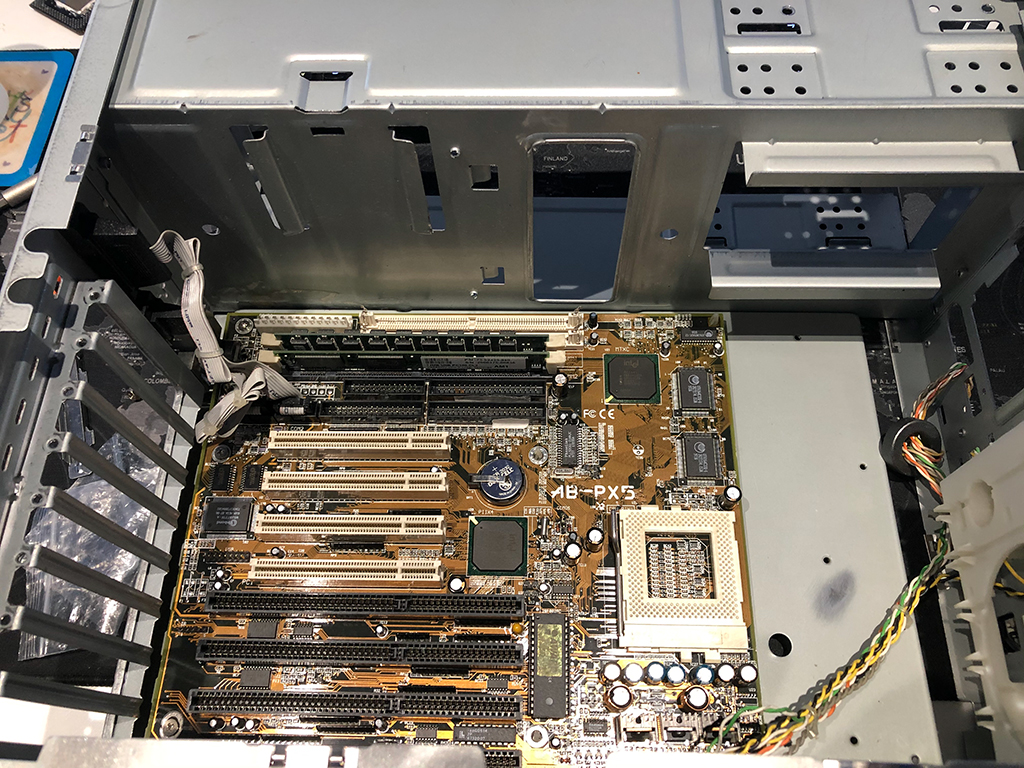 The heart of the machine, Just something about this processor - apart from the very poor Quake performance due to the terrible Floating-point performance (What eventually killed the Cyrix processor) it was the first time Cyrix got close to Intel on the 6x86. Notice this is not the L version and gets quite hot. It uses a PR rating of 166mhz but actually runs at 133mhz. 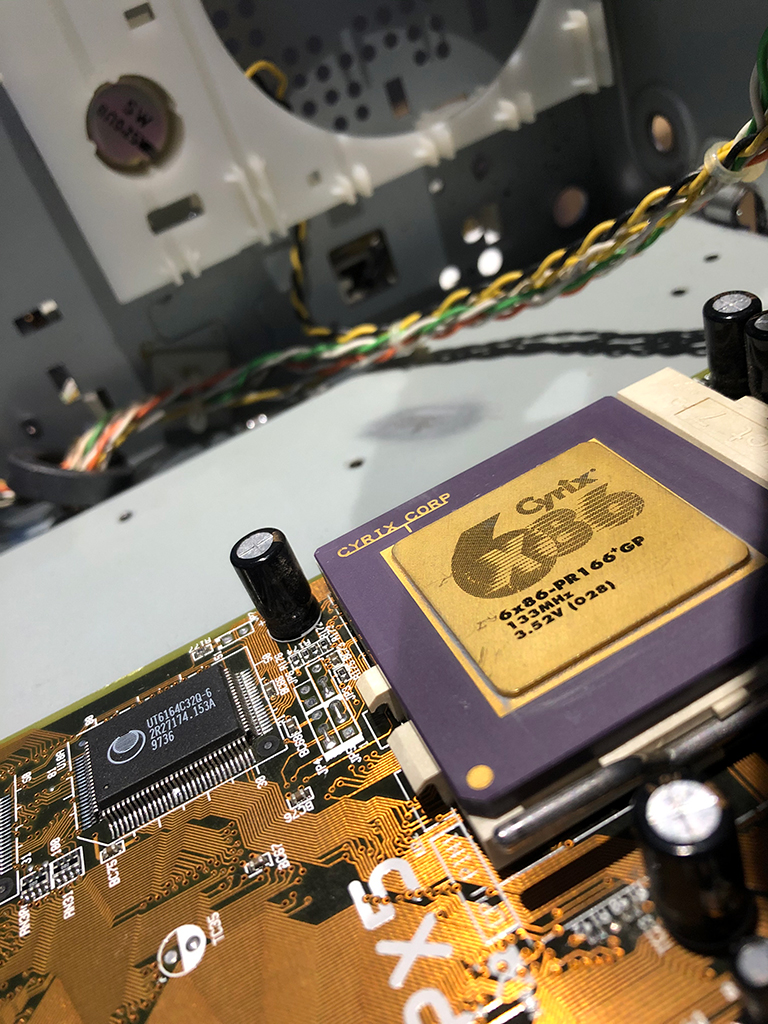 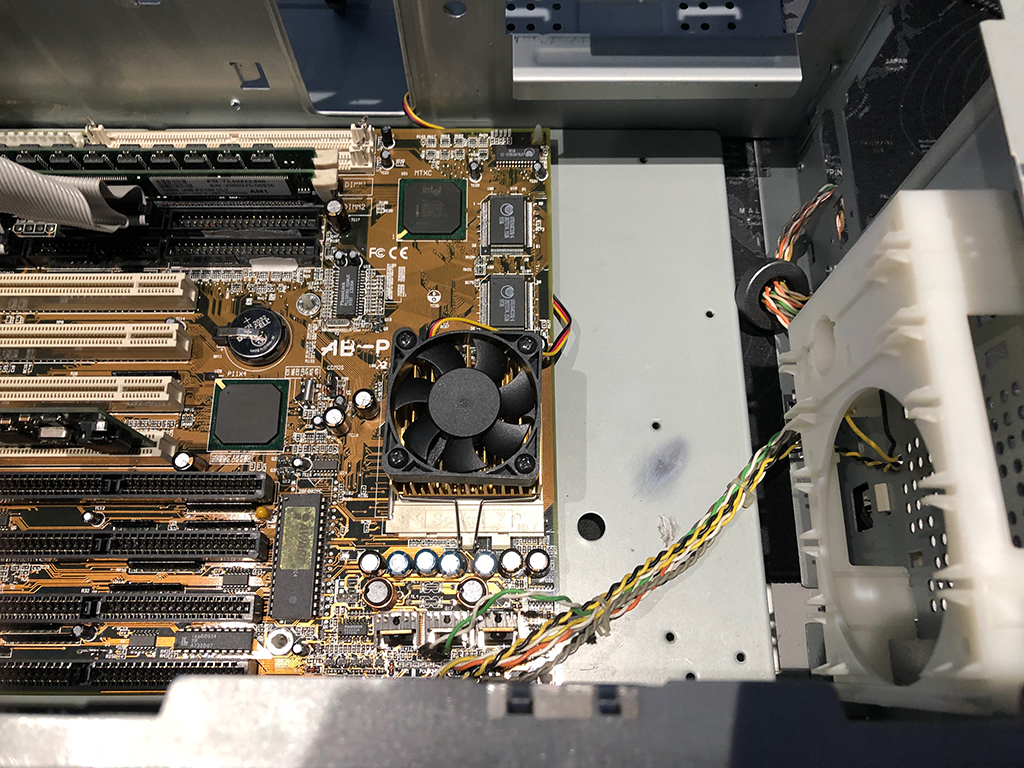 The Graphics Card, I managed to find a Diamond Stealth 3D 2000 2mb (Upgradable to 4mb) S3 Virge. Fantastic DOS support and I was interested in some of the wrappers and patches for the S3 Versions of Games. There's some great info on Vogons and managed to find most of the patches for Games that run on the card. I'll call it out now, it's terrible for 3D 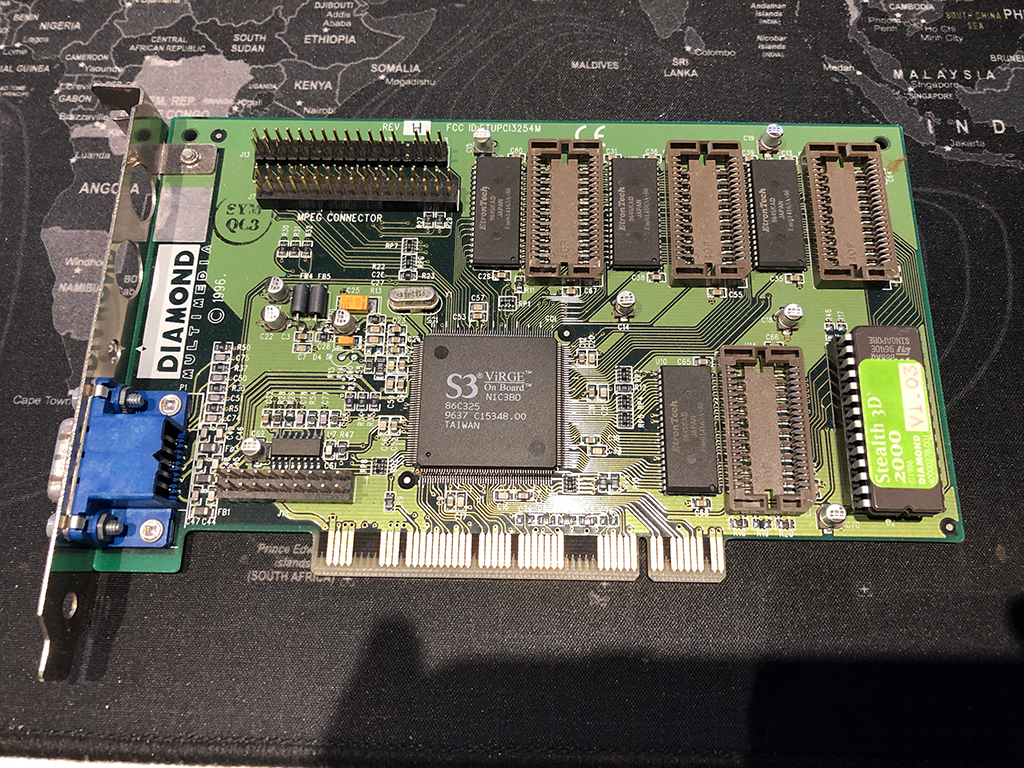 Onto the Sound Card. I believe this card came with the machine. It's period correct and actually not bad. It's an ESS AudioDrive with the ES1868F Chipset. It's a decent compatible Sound Blaster compatible Sound Card. I've also noticed in a number of games I am able to select the ESS AudioDrive selection. However, I have noticed that some of the sound effects are 8bit. It has a Wavetable header. 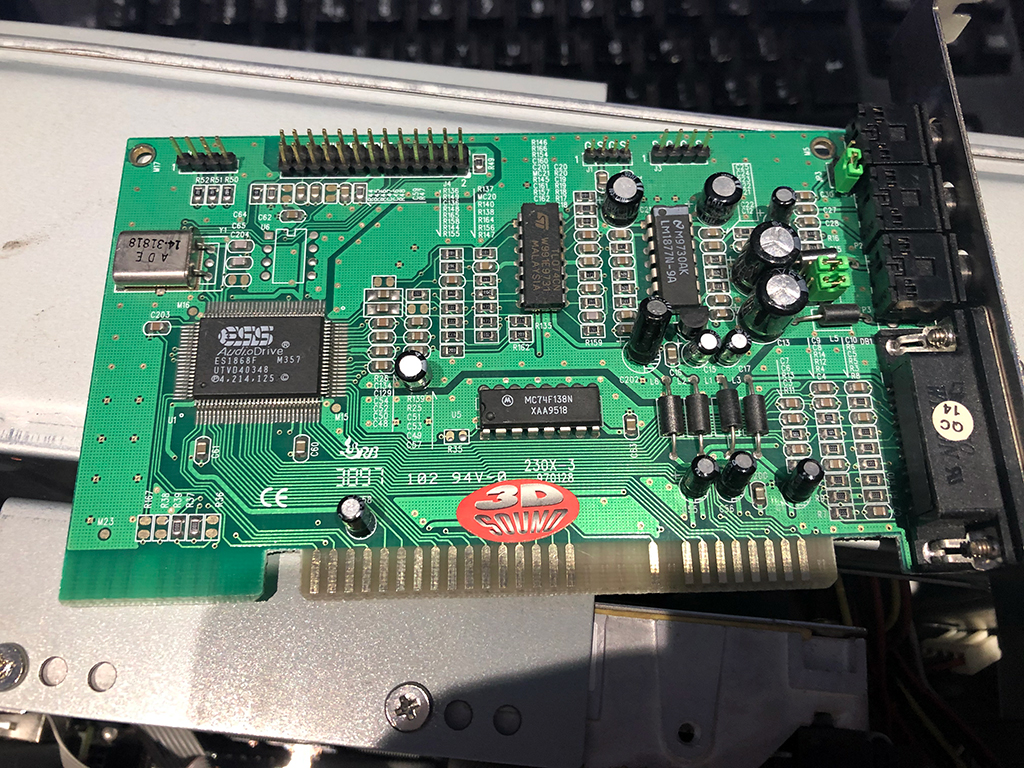 Time to tackle that front panel... I managed to rip everything out of our boiler cupboard and put together a little Retrobrite station. It's nice and warm in there which should help with the process. I used a 30w UV light and applied Truzone Cream Peroxide 12% 40 Volume all over the case and kept on coming back to it every 20-30 minutes to re-apply. This was the first time I had not used any Clingfilm. 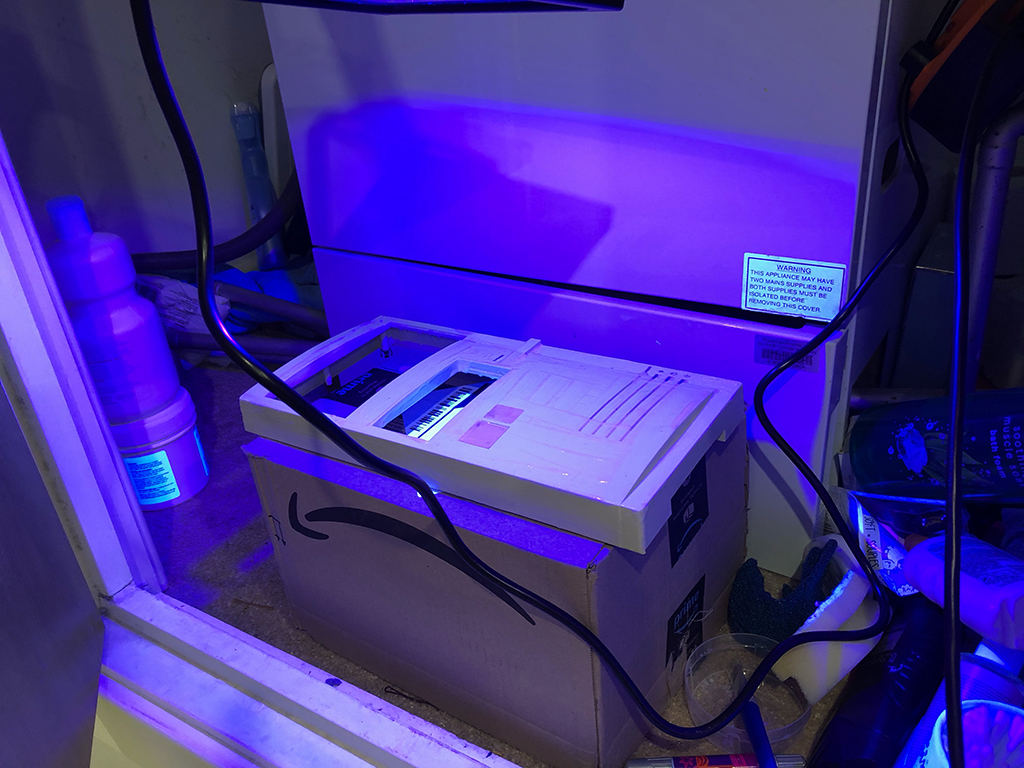 The smaller bits, Front panel blanks, and the floppy disk drive front panel. I put together a little station in the Kitchen sink, much to my wife's surprise! Again throughout the day re-applying when I could before going dry. I left both for around 8 hours. I think probably 12-24 is the sweet spot, depending on the hardware. 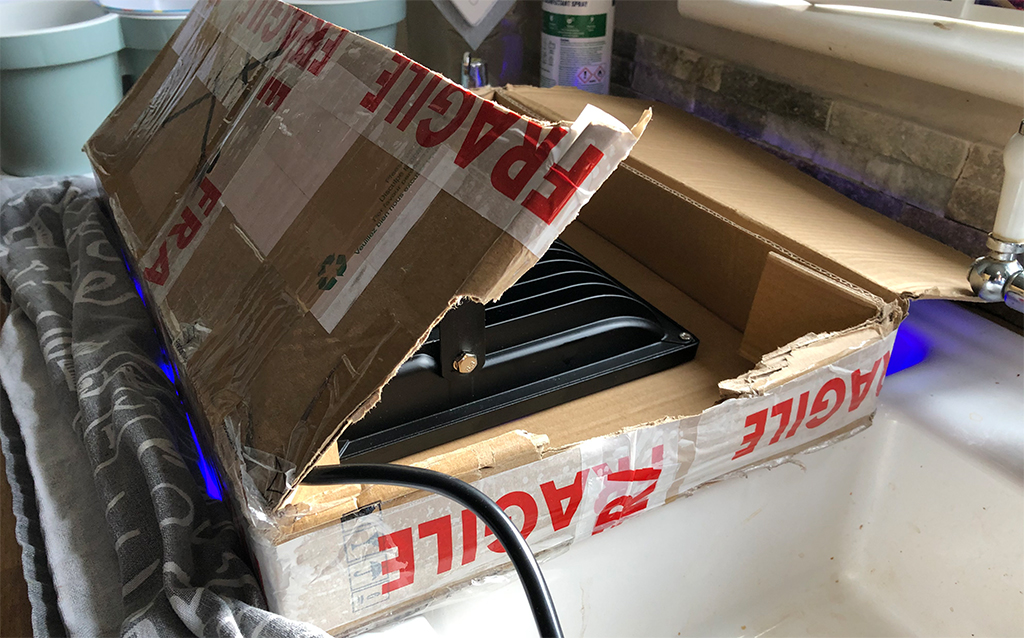 So results, I'm happy! I tried to find some natural light. As I said, I could have probably left them for longer but worried about them drying up overnight and another day with all the mess... I decided I can always re-apply at a later stage. The transformation to what it was is great though. It's a shame I didn't get a shot of the floppy disc drive as that was the worse. 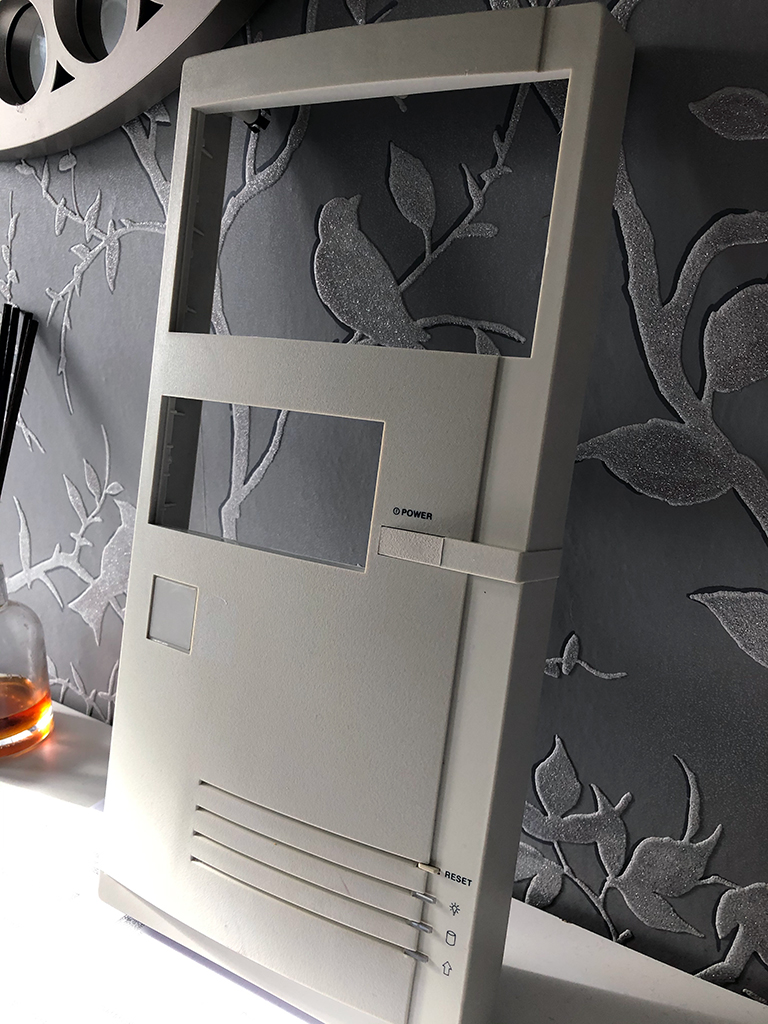 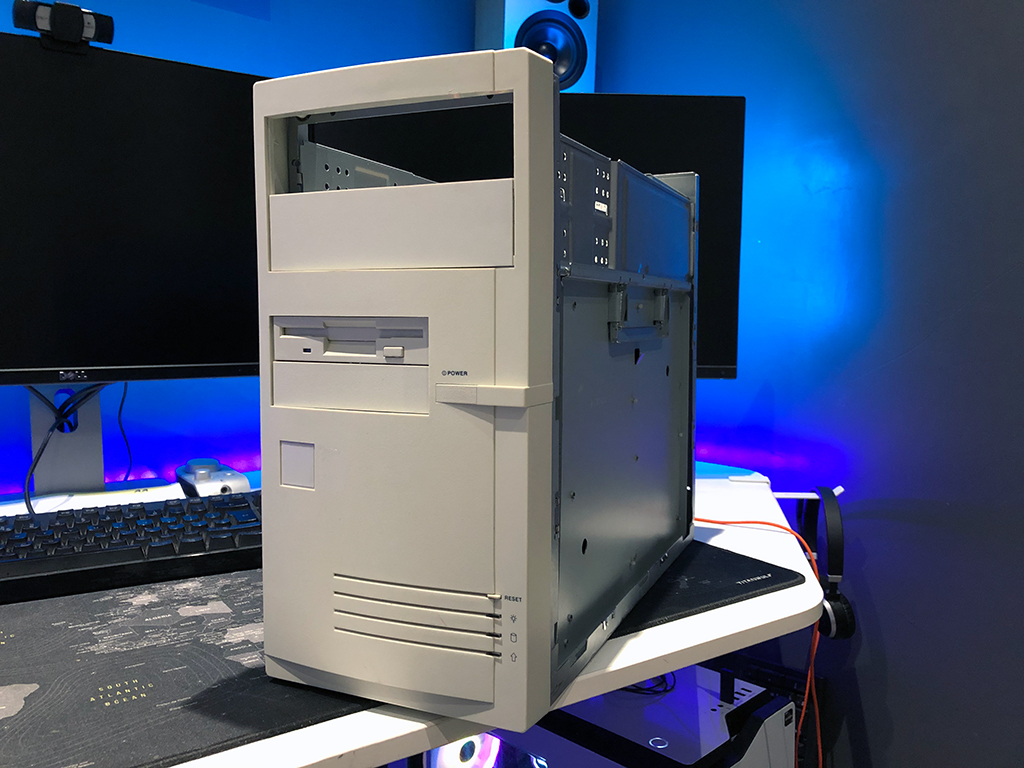 So back to rebuilding, The period-correct Sony 8x IDE drive is a perfect edition, in great shape. Then, of course, new Case badges! 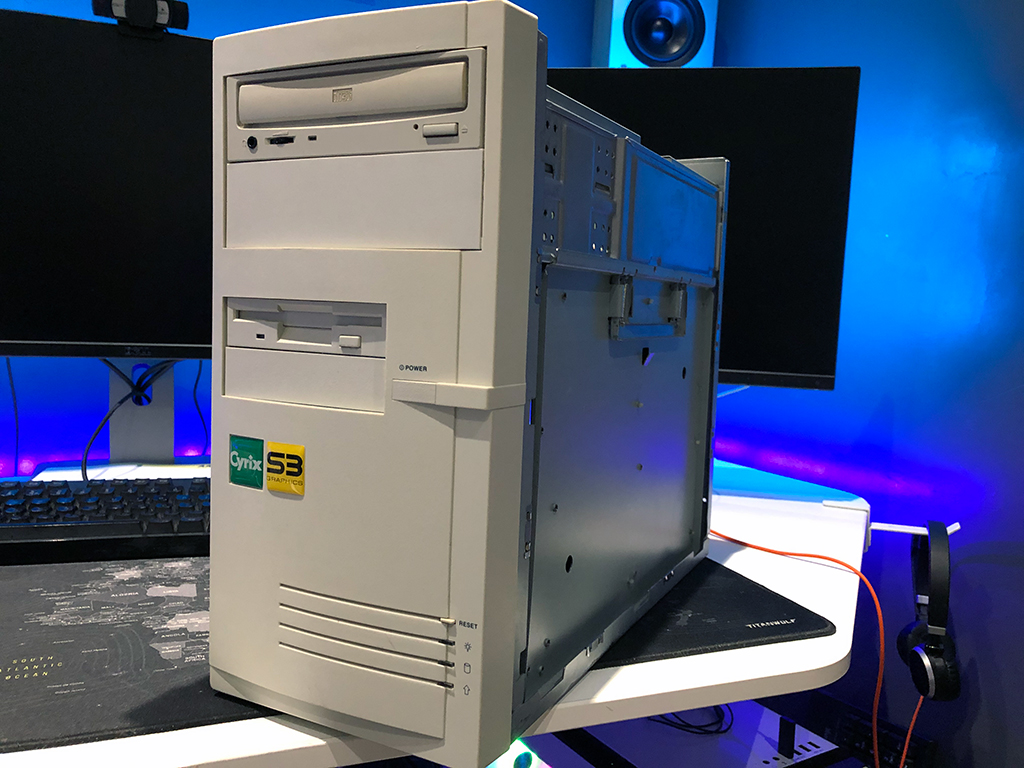 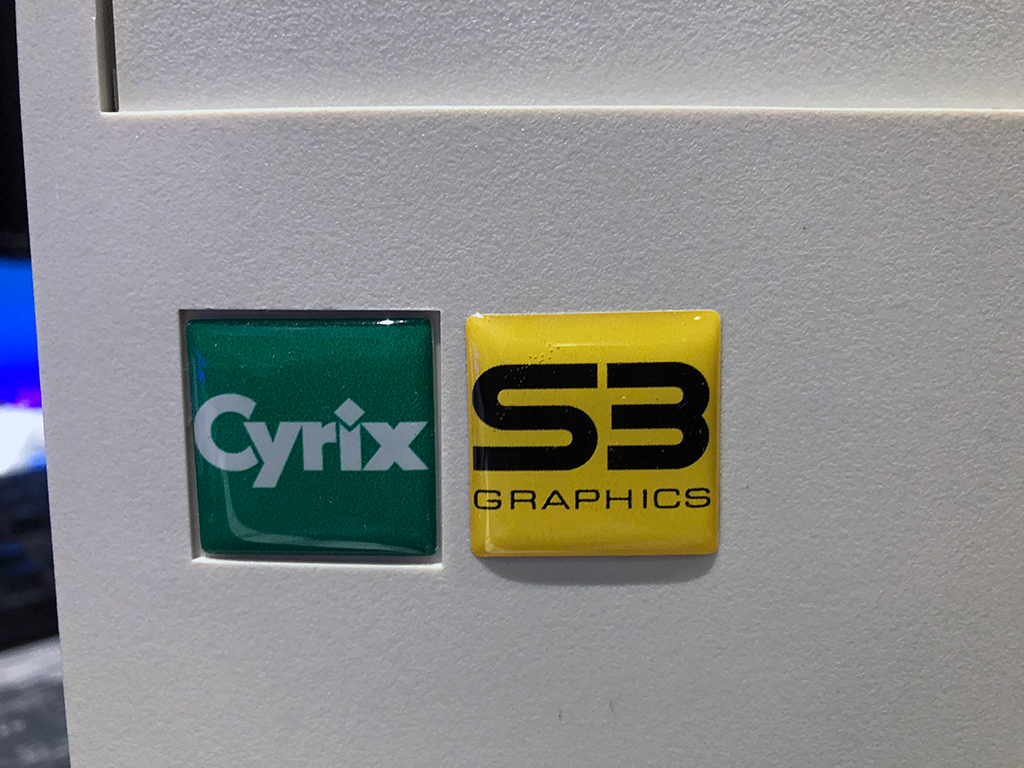 Hard Drive is an IDE Quantum Fireball 2.1Gb, mounted in the top cage. Love the noise of these drives. There is a Intel Pro100 PCI NIC in there, but have ordered a 3COM ISA Network card so I can use mTCP. 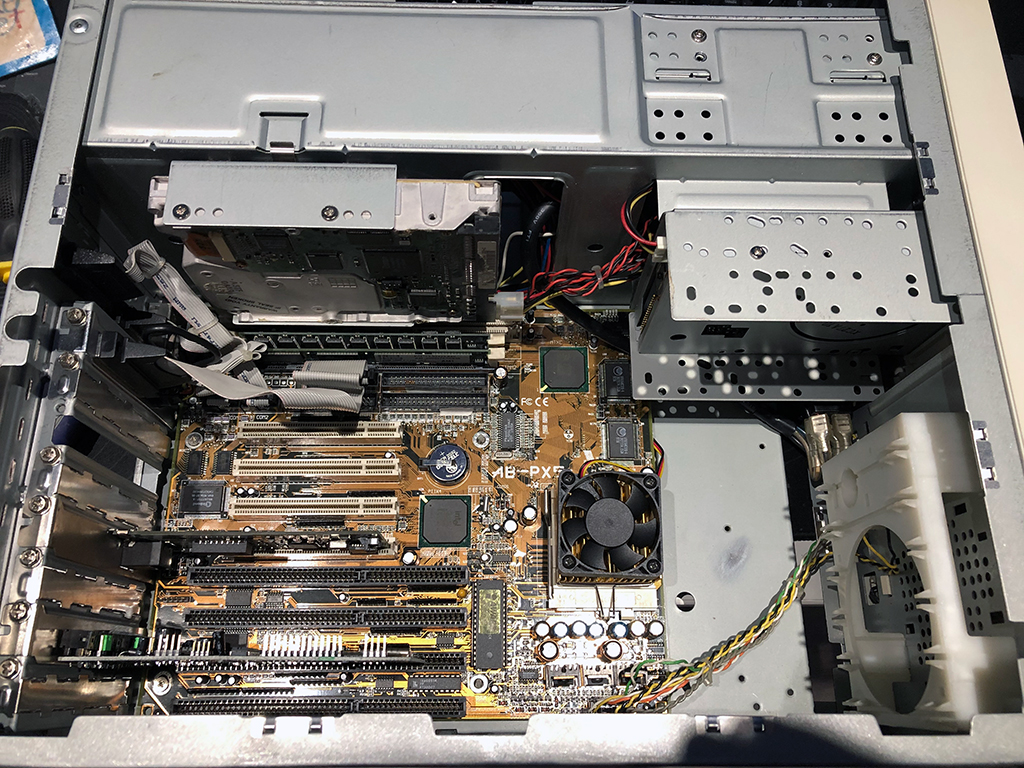 Completing the installation of Windows 95 SR2 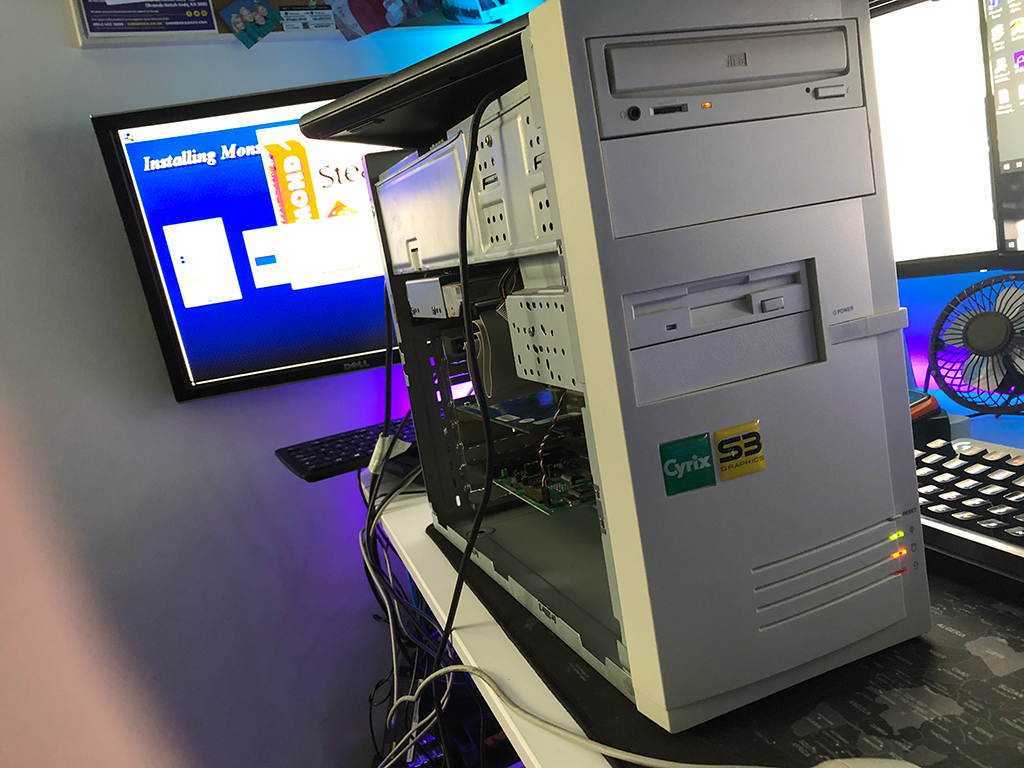 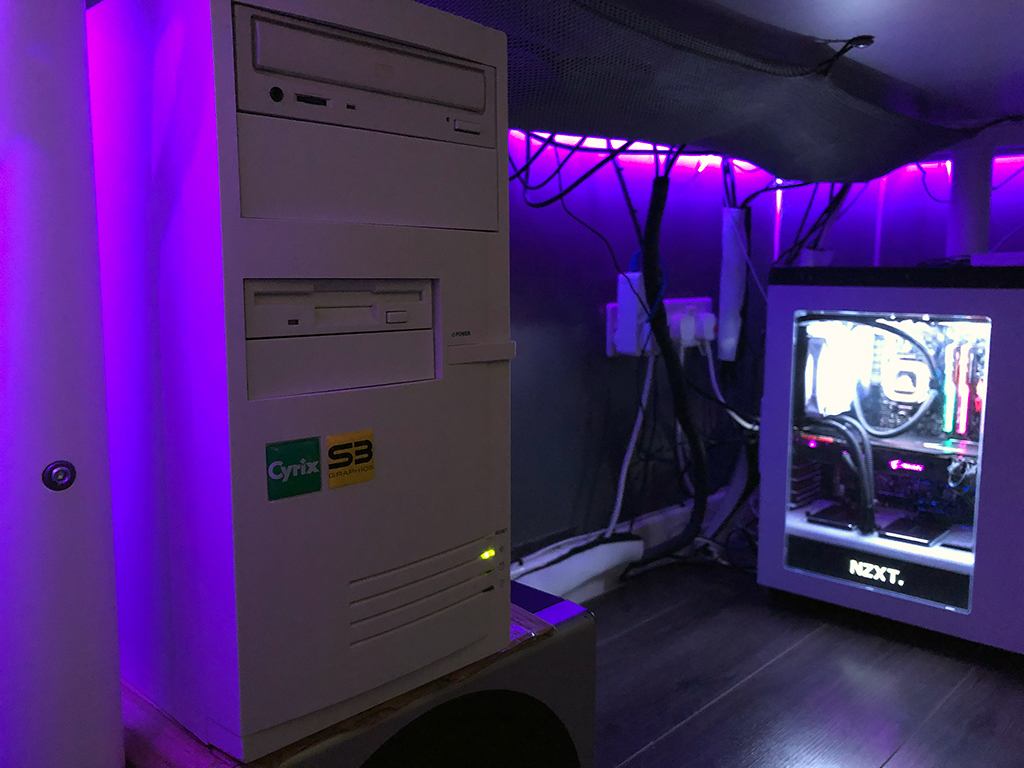 Running the S3 patched version of Tomb Raider @ 512x400. It runs well in places and then tends to chug. I need to play switching it down to 320x240. These are fantastic cards for DOS. Very compatible and provides a fantastic image to my DELL 4:3 2007FPb Monitor. 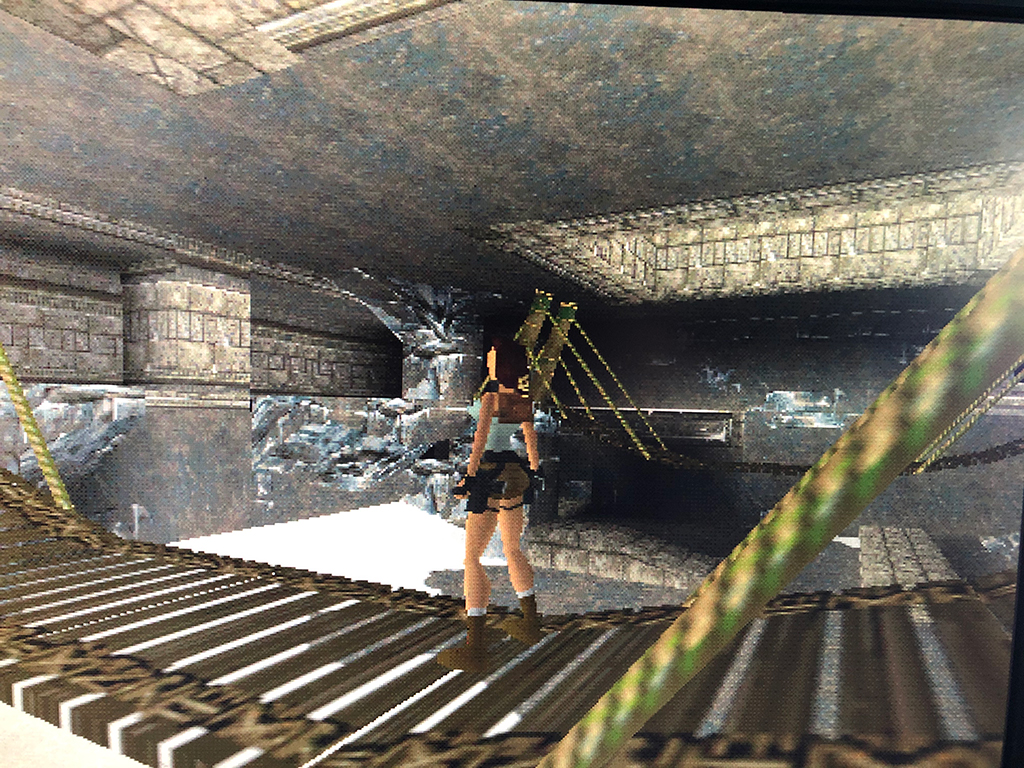 I'll get some benchmarks up and try and notswitch to the Intel Pentium 233mhz MMX that I've got sitting on the shelf next to me! It's a great DOS box so far. Quake runs terrible thanks to the poor floating point (21fps @ default res) but I've got loads of machines to play that one accelerated.

Installed SciTech Display Doctor 6.53 to enable some games to run in SVGA VESA. 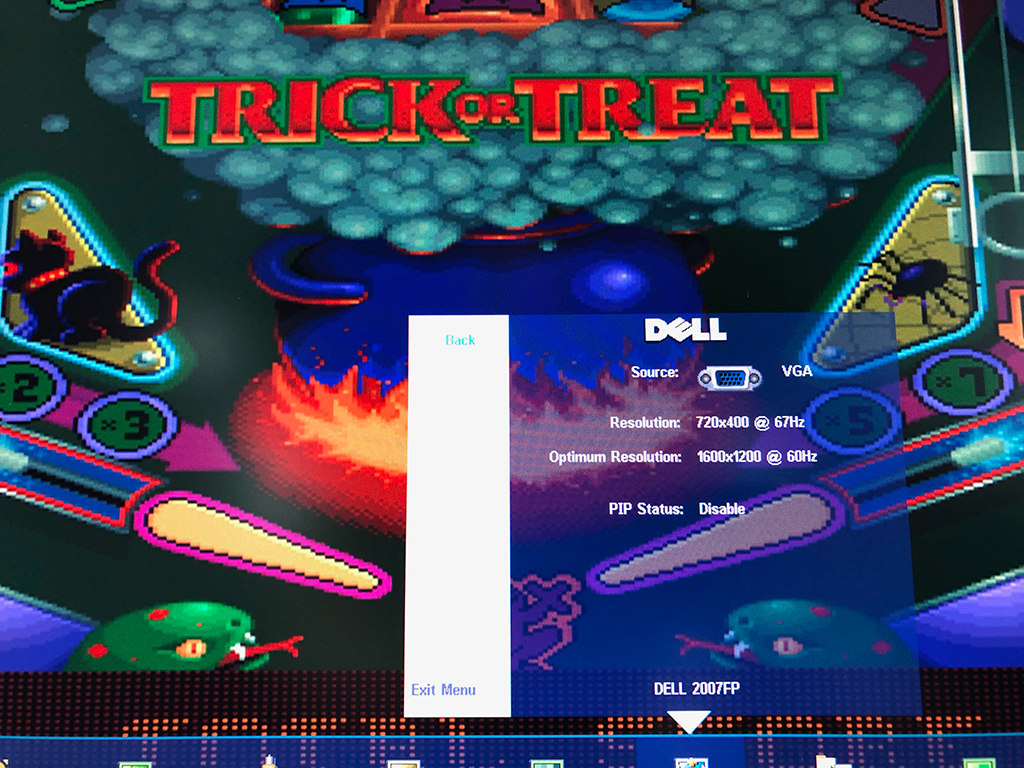 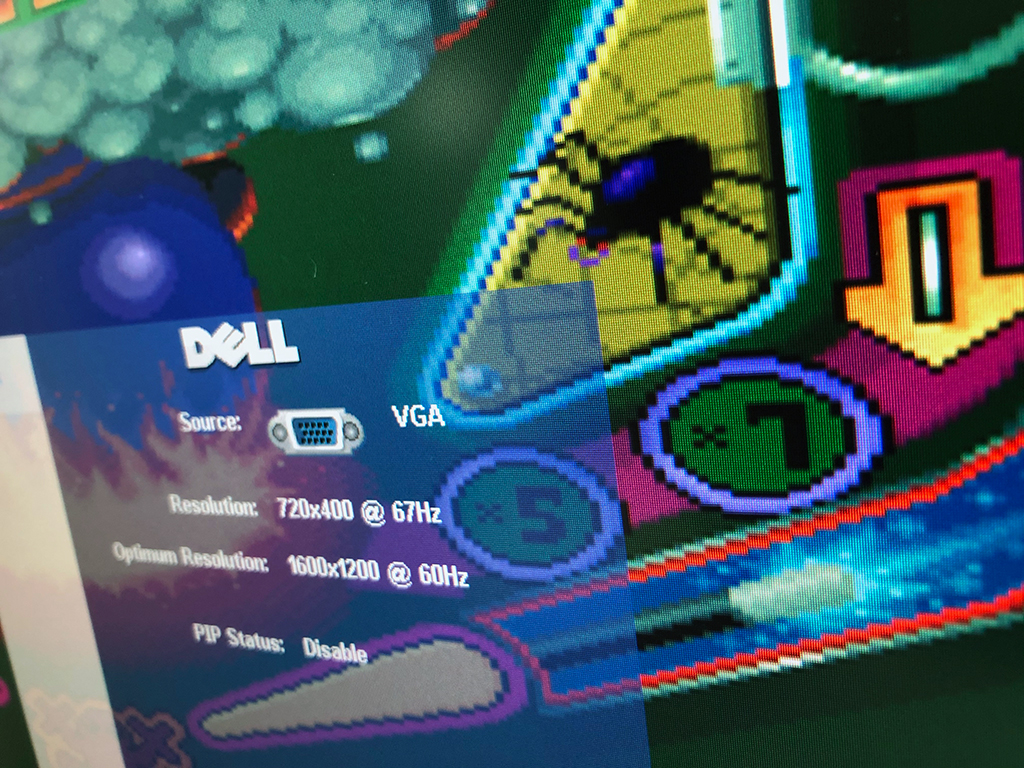 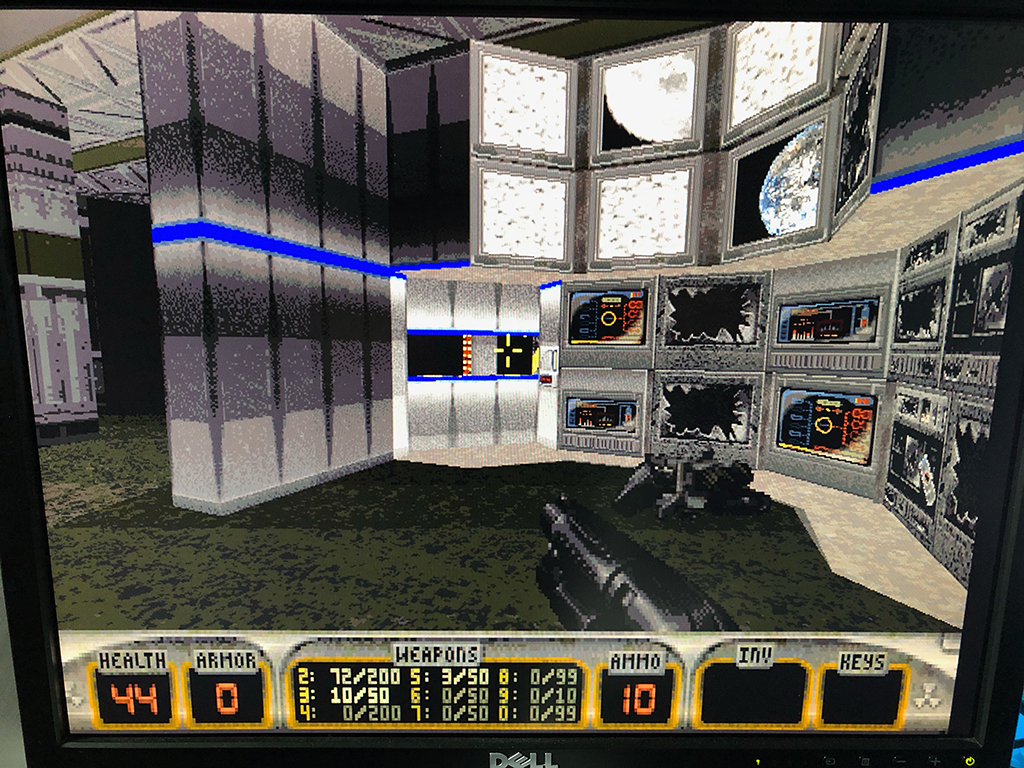 Starts to chug later into the level. Need to resist swapping out the Cyrix for the 233MMX..! 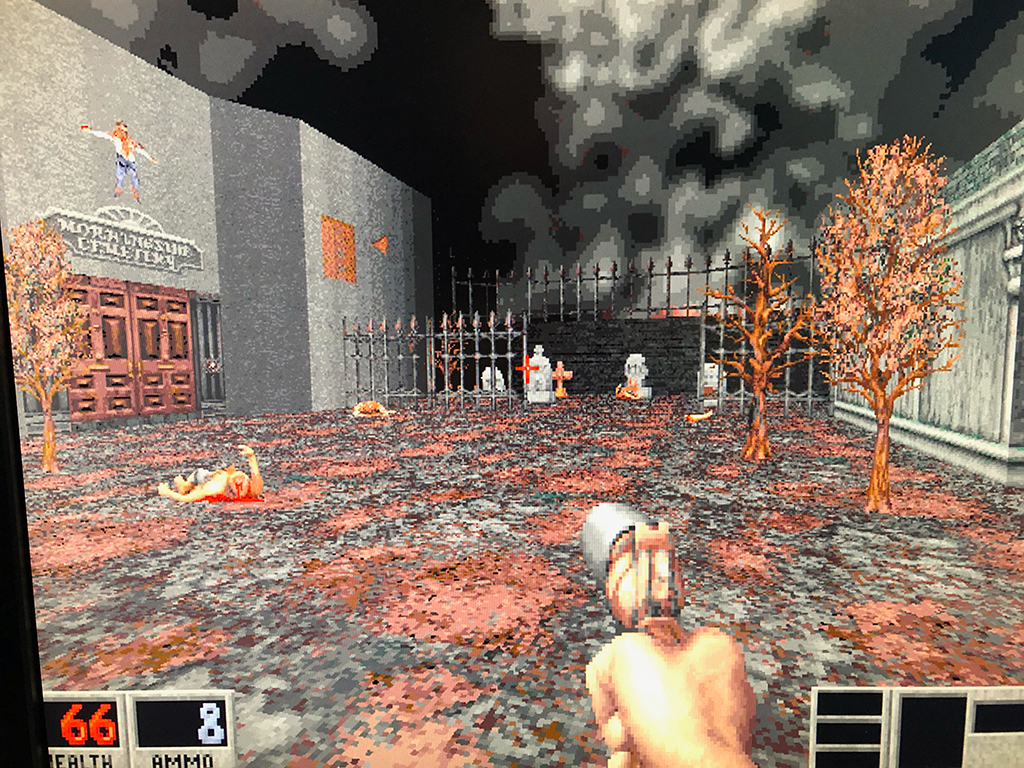 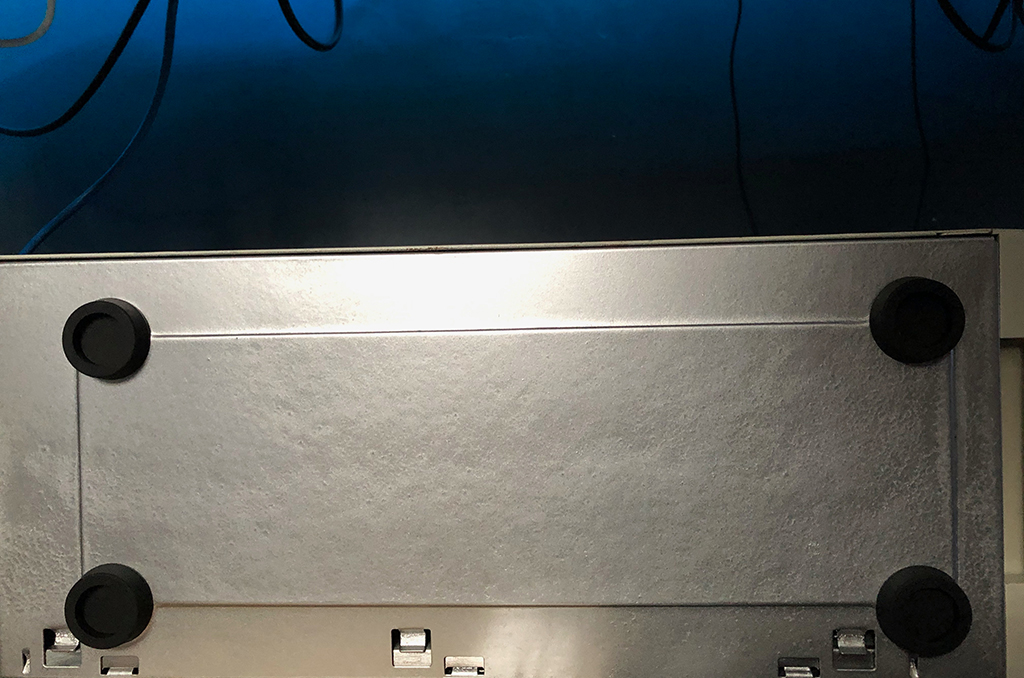 Really pleased for DOS to be communicating on my network. I now have the Packet driver for the PCI Intel Pro100 running.

I'm using the fantastic Brutman mTCP tools http://www.brutman.com/mTCP/. Upon booting, the packet driver is loaded via Autoexec.bat. Then I'm able to use the mTCP DHCP program for the card to get a DHCP address, then we are able to use FTPSRV, FTP File Server which is so valuable on transfer files in/out of the machine. Thanks to this, I'm booting directly to DOS and have disabled the Windows 95 splash screen.

Ah I saw this over on vogons, lovely clean build mate!

Looks great. I am also a fan of new case stickers and I think they really complete the look of a case!

Looks great. I Really want a DOS PC , something like a 486 , i wouldnt know where to start with boards and CPUs, controllers etc, i havnt built a DOS PC .... well since DOS was around

Kurgen said:
Looks great. I Really want a DOS PC , something like a 486 , i wouldnt know where to start with boards and CPUs, controllers etc, i havnt built a DOS PC .... well since DOS was around

Depends how patient you are and what you want...
I got a dell 486 in og boxes with the og screen for 70 delivered.. Some oem 486s dont sell for too much but are often limited to 5v cpus.

LewisRaz said:
Depends how patient you are and what you want...
I got a dell 486 in og boxes with the og screen for 70 delivered.. Some oem 486s dont sell for too much but are often limited to 5v cpus.
Click to expand...

Im in no Rush, and i guess for dos it could be up to PentiumII ? but the market has caught on that retro is in, and its all quote expensive. I would alos be worried that i could buy something and 2 weeks later a cap blows and leaks all over it

Fantastic build, iirc my first ever computer had a Cyrix CPU

Kurgen said:
Im in no Rush, and i guess for dos it could be up to PentiumII ? but the market has caught on that retro is in, and its all quote expensive. I would alos be worried that i could buy something and 2 weeks later a cap blows and leaks all over it
Click to expand...

If its just for dos then socket 7 would be perfect. Much lower cost for motherboards/cpu and just a basic pci vga card needed along with your choice of soundcard.

For the sake of good records, I had the exact same cpu (groan), but instead of your Diamond Stealth i had a Vodoo Rush, with a MASSIVE 6Mb of EDO ram! 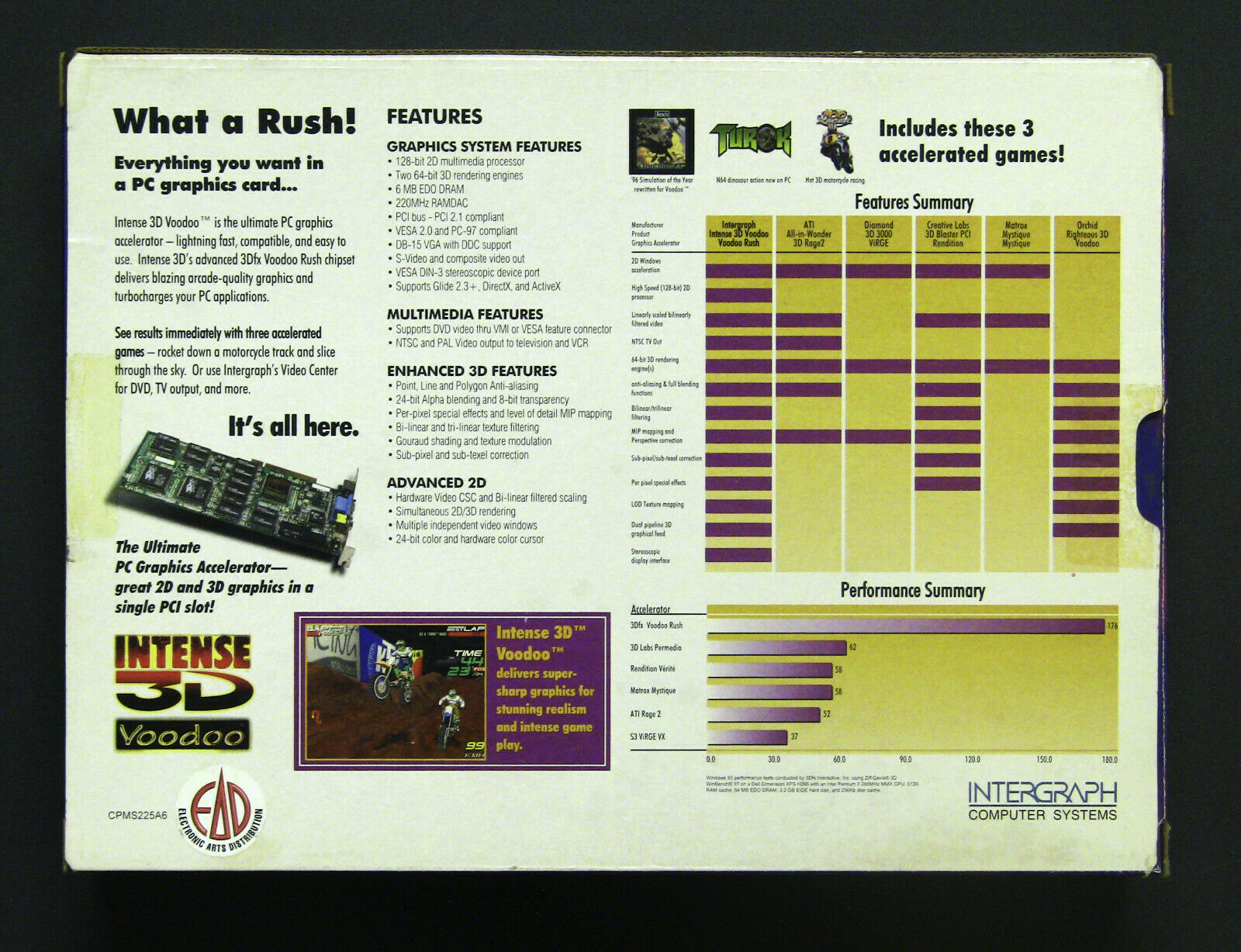 Thats a lovely build... Personally I wouldnt have risked the cream (and wont ever again) as it is so easy to streak but you got great results on your retrobriting and your rust removal skills are great

Great build and thread. I had this same case back in the day

I can't remember what PC I had at the time, I think it might have been when I had an Intel Pentium 150MHz.

I remember BITD we all avoid Cyrix like the plague... Would love to see OP doing more builds cos his attention to detail is clear for all to see

Nice, my first ever PC I bought from was a PC supplier called Panrix and it used the same CPU. Served me well for the time, if I remember correctly it was the Labs Winner for one of the PC roundups in my copy of PC Pro at the time and cost me in total around £1K.

Your build is so superb I'm literally envious! is there any part numbers on that case? It was my childhood box and I'm trying to rebuild it. Still have my Pentium 233mmx, Radeon PCI, and Maxi Sound Muse, gotta have the case to be complete though.
You must log in or register to reply here.
Share:
Reddit Pinterest Tumblr WhatsApp Email Share Link
Top Bottom