Needed a NAS box and found the current micro/mini servers or a Qnap/Synology a bit rich for me, so am putting together my own and thought I would post up here for anyone in a similar position.

Planning to RAID mirror the SSD once funds allow so it can be more safely used for caching, will probably move the OS onto a USB drive on internal header at that point.
Also planning on getting a pair of Asus XG-C100C 10GbE NICs, one for this box, and the other for my main system, or failing that some second hand Mellanox Connect 10Gb SPF NICs (2 for £50) or similar.

PSU (overkill for this), display adapter, HSF, and the SSD all came out of my spares box I had in the cupboard, the 4TB X300's have all come out of my main TR system.

Cheapest Intel C232 chipset board I could find anywhere, its not full size ATX (full height but not width) which is perfect for my chassis, has 6 SATA ports, an Intel NIC, and with a BIOS update can take the E3-12** v5/v6 Xeon if required. 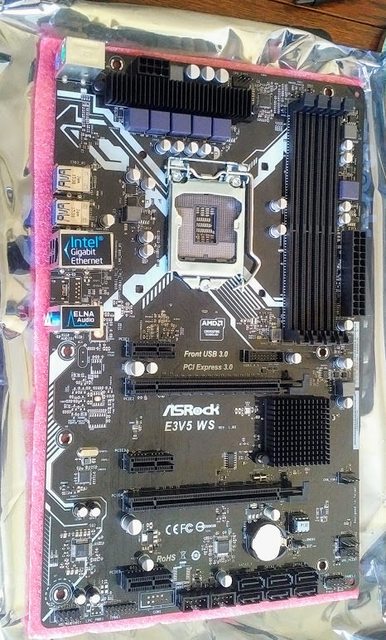 Completely unneeded addition, but I've never been a fan of the stock Intel HSFs: 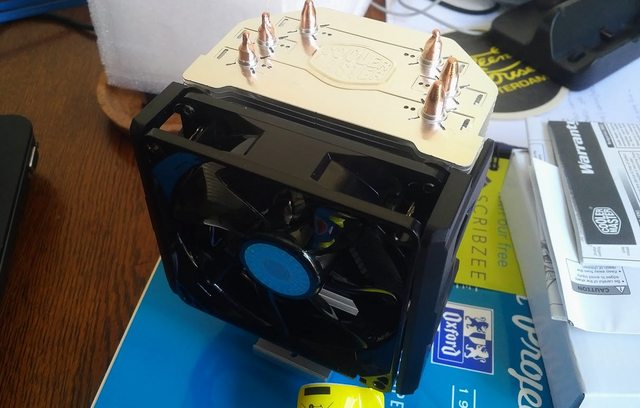 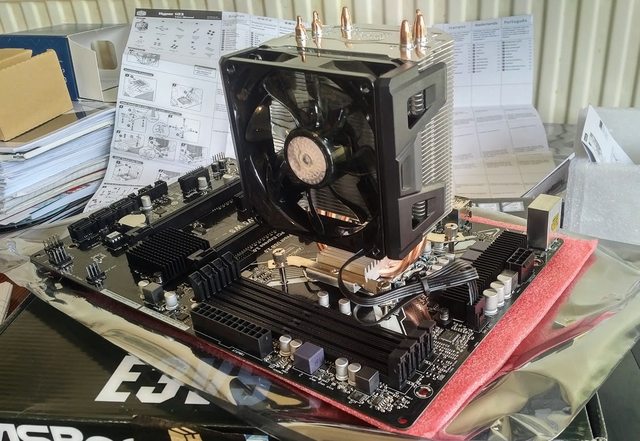 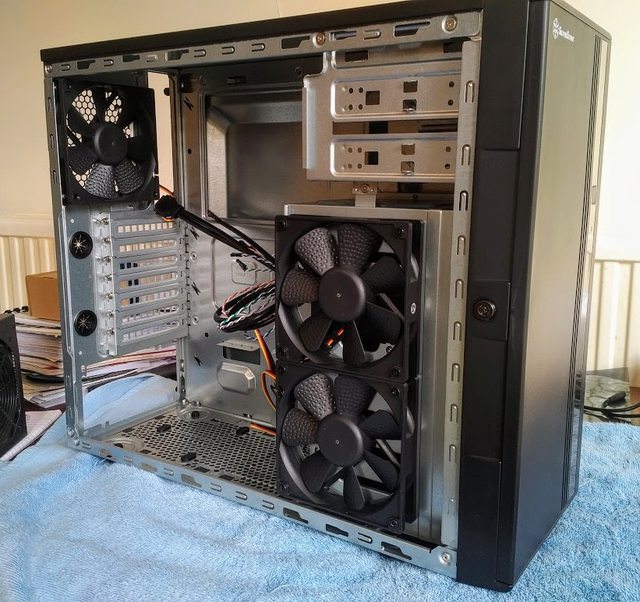 Front door seems sturdy enough, with a magnet to help keep it closed if not locked, you can also move a slider to the up position on the inside of the door to prevent the power button being pressed without having the door open. You'll find 2 USB3 ports behind the front door which is handy if you have a large amount of data to upload via 'sneakernet' 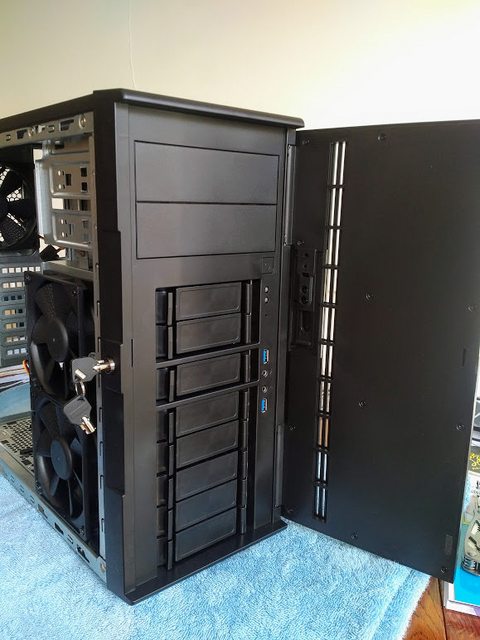 In this image you can see the backplane - its quite a cheap looking affair, but is neatly soldered, be careful if mounting a full width motherboard in this chassis - it would be quite easy to catch one of the capacitors with the edge of the board if not being attentive enough during installation. Each tray has its own SAS/SATA port on the back of backplane, 2 molex connectors provide power, and the fans for cooling the drive cage can be both be plugged into the provided 3 pin fan headers for a nice neat installation. 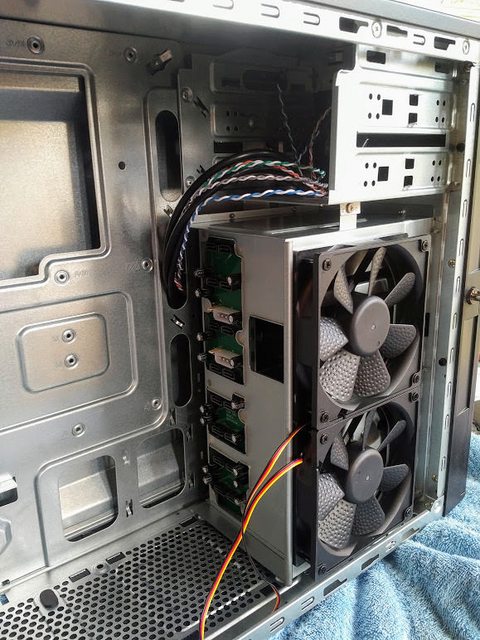 I had 2 spare PSU's to choose from, the Antec HCG is much newer than the Truepower, but is non modular, and is a much lower quality unit internally, but I tested both on a PSU tester to help with the decision. If funds had allowed I would have purchased a decent quality 300/350w Seasonic - but for now one of these will be fine 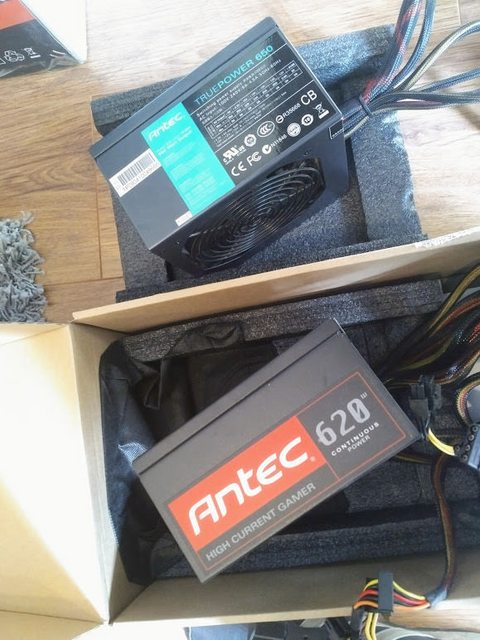 PSU tester showed several errors on the HCG - which made the decision much easier! 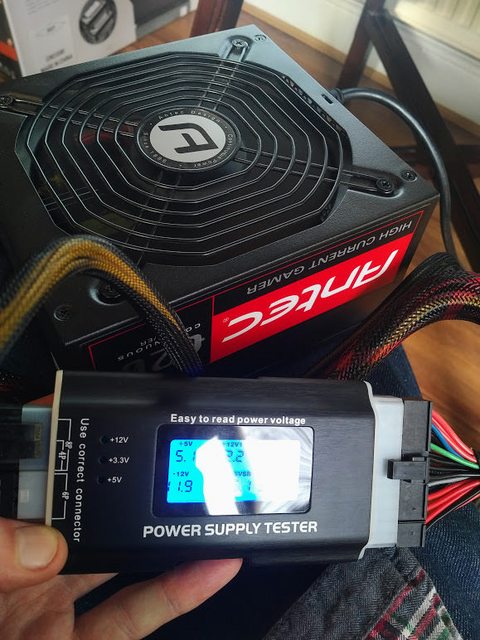 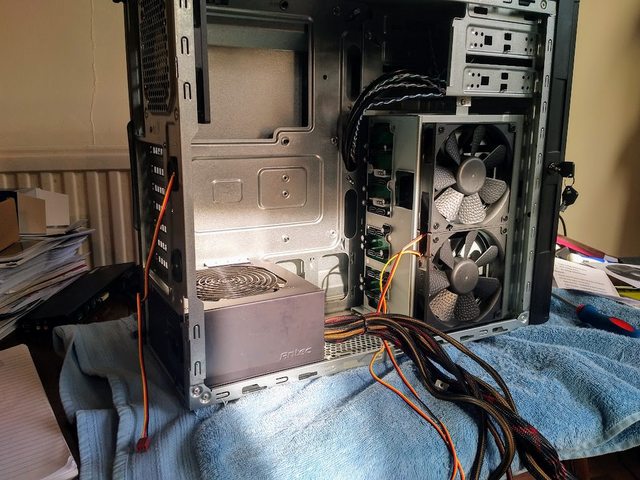 Then installed the motherboard - you can really see how narrow a board the Asrock is, case might allowed the installation of boards upto CEB, though it would be very tight. 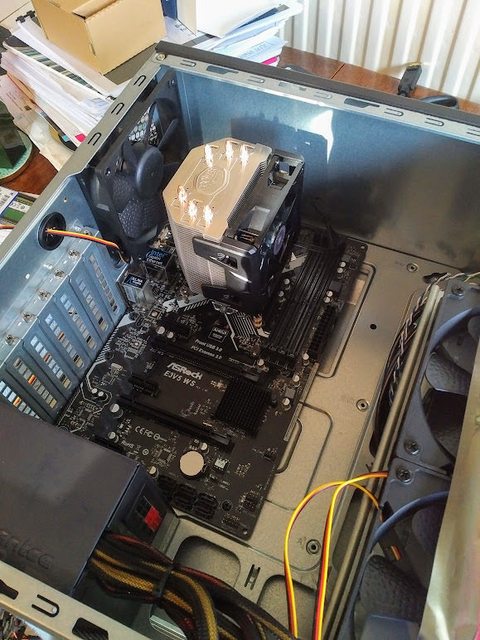 I added some extension cables for the 8 and 24 Pin power connectors to allow a neater installation, plenty of space to play with behind the motherboard tray to get things hidden away 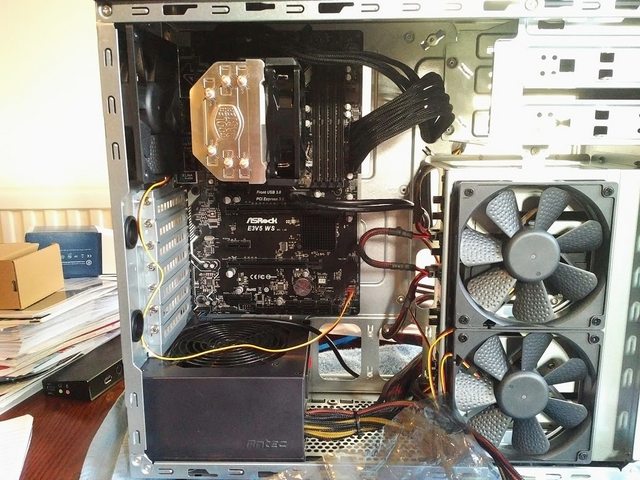 And that's as far as I've got for now, having realised only after installation that this board has arrived with a v1 BIOS - so have been waiting in for a Celeron G3900 to show up today so I can flash the BIOS with a newer one that supports Kabylake.

How much ££ was it, excluding the drives?

rotor said:
How much ££ was it, excluding the drives?
Click to expand...

Nice. That’s a good little system that should last you a while. You can always upgrade the CPU later if you want.

“BongoHunter” said:
Needed a NAS box and found the current micro/mini servers or a Qnap/Synology a bit rich for me
Click to expand...

Surely an HP microserver is less than this?

BigT said:
Surely an HP microserver is less than this?
Click to expand...

Gen8 would have been ok, but seem to have got a bit rare and I think their starting to show their age now, and the Gen10 is not a very decent piece of kit IMO.

The rest of the current cheap Fujitsu, Lenovo, Dell and HPE are also not hot swap capable unless spending a lot more money.

Finally got round to uploading the rest of the pics

Better pic of the backplane: 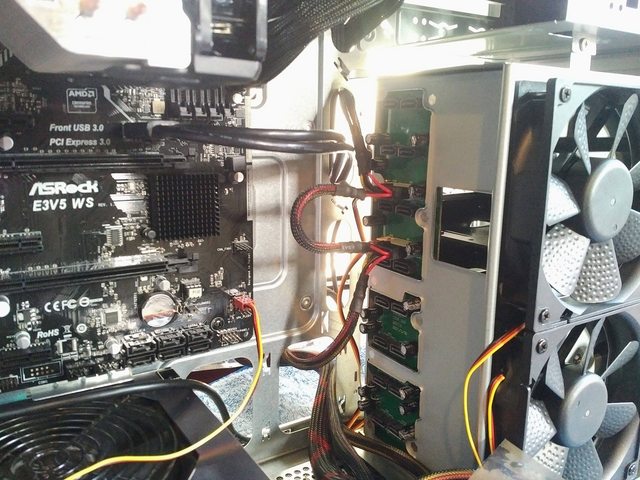 And managed to get a pair of 16GB SanDisk Ultras for £8 for mirrored FreeNas install: 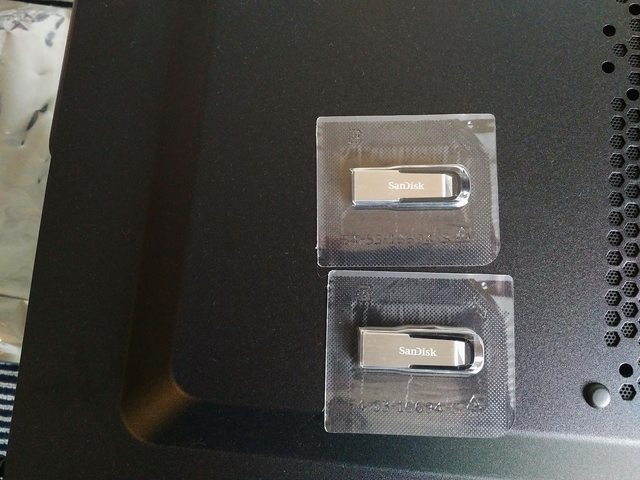 2.5" drives seem to fit in the sleds well enough - smooth insertion and removal despite the cheap chassis - you can see the acrylyic "wand" running along the top edge of the sled in this pic - clever way of making the backplane LED visible from the front of the tray without an having to have an expensive sled/tray: 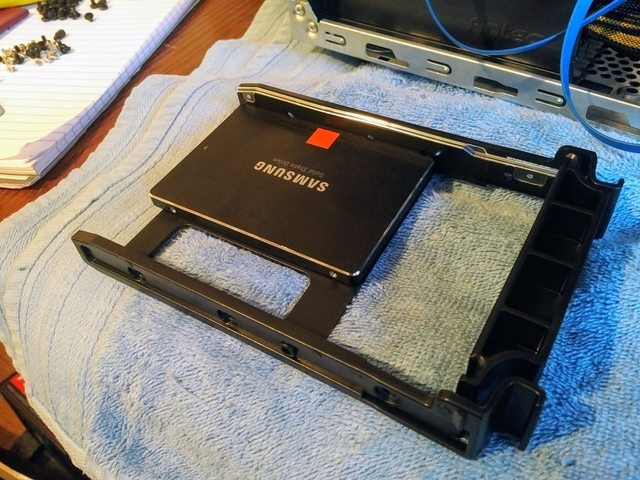 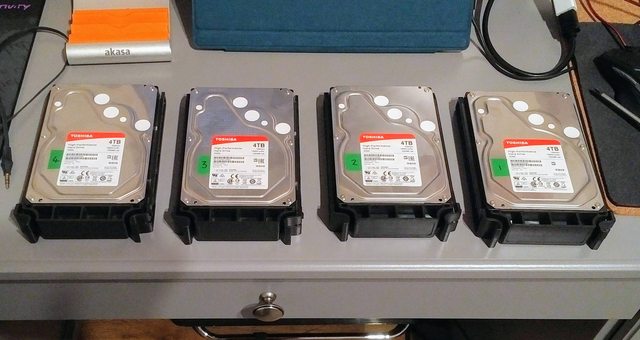 All done, will need to buy some shorter (and matching!) SATA cables at some point to address my cable OCD: 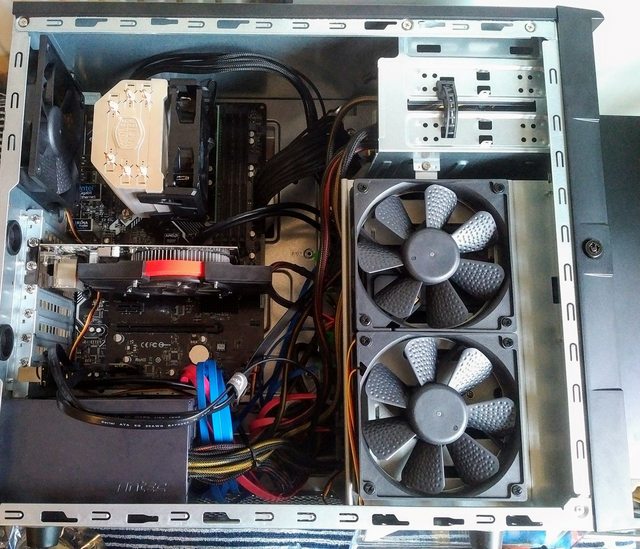 FreeNAS install was nice and easy - works well, ZFS is nice and have full disk redundancy which is nice, due to my disk pool size I need to add more RAM before I could run any VM's, but as a backup device which is my main priority Im very happy with the performance for now, and the new web-interface is much more modern than the previous releases: 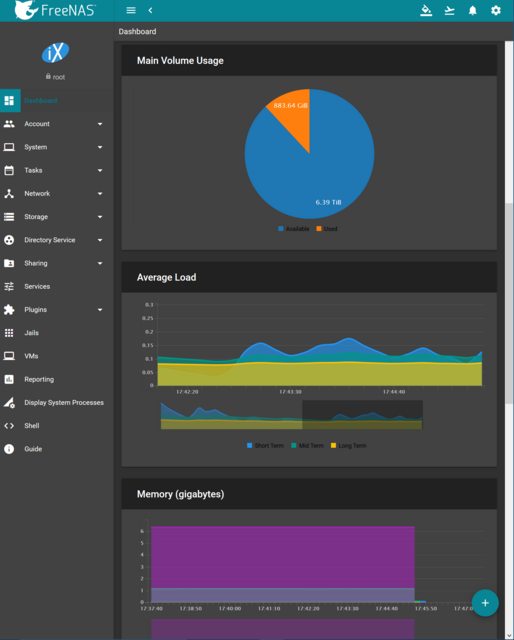 Is 8Gb enough for ZFS?

mejinks said:
Is 8Gb enough for ZFS?
Click to expand...

Yeah its fine - the 1 GB of RAM for each TB of storage seems to be a worst case scenario kind of thing and I think you'd need to be using more ZFS features such as deduplication/compression to get near it - I am planning on adding more RAM (3 more sticks of 8GB) to give me 32GB total - but without running VMs and while I'm consuming less than 4TB of total pool size it seems fine for now and performance is good.

Edit: if this build was for more than just my home network with many clients accessing / using simultaneously then more memory would definitely be needed
Last edited: 27 Apr 2018

After a couple of short power cuts I've gone and ordered a new UPS - my current ancient Belkin coped, but if it had lasted another minute or so then it would not have made it...

Have orderd the rather cheap APC Back-UPS BX 700 (only £70) - does anyone here have an APC UPS working with FreeNAS UPS service? At idle the NAS draws less than 100w - so should be able to get about 20 mins from the new UPS hopefully.

Unlike my old NAS this one has a USB interface so I can hopefully automatically invoke a graceful shutdown after a few minutes of powerloss (not an essential but nice to have) - but nearly all of the APC UPS with the USB interface have the following listed on https://networkupstools.org/stable-hcl.html under support level, and I'm not sure what features of the FreeNAS UPS service this will let me use tbh...!

based on fragments of publicly available protocol
Click to expand...