Yes, yes another 'Spec Me' thread but I did make use of the search function and read through a lot of threads here before deciding to post!

Sound has been one of those things I've massively neglected on my PC, I've not had a seperate sound card since once upon time owning an Audigy 2 card, and this was to help out with Sound Processing on my then Barton 2500 & Nforce2 based PC. but anyways, I digress.

My primary purpose posting is to get a much better quality of sound out of my PC. I have Asus Maximus Formula and its apparently wonderful Supreme FX audio module, but paired with arather horrible set of labtec bargain basement headphones. Yuck I here you say!

The Spec I'm aiming for is:

1) Decent quality soundcard for use with gaming on a headset.

2) At some point in the future, I'd like to treat myself to a nice little Amp and Bookshelf speakers for music playback. I'm no audiophile by a country mile, but looking at something like a little Cambridge A1 setup.

3) My PC isn't used for Movies or DVD playback even, I have a seperate HTPC that later on I will spec up with a proper soundcard.

I'm not looking to spend hundreds and hundreds on my setup, just something thats going to give me good bang for buck and will accomodate my music output choice in the future.

Reading through the threads, the advice repeated over and ovr seems to be either Xonar + Goldring DR's or X-Fi + Senn 555s. I love the DR50s for being so cheap, and also see that the Xonar D1 / DX cards are also cheaper than the equivalent X-FI (Gamer card?).

The DR50's are now ordered anyway

Go for the Xonar DX or D2X.

It was a toss up between the two for me as both came out with similar results in comparison tests - the D2X has a better DAC on paper but the differences aren't very noticeable apparently, I went for the much cheaper DX in the end because I wanted to keep my front panel functionality (I plug & unplug my headset a lot between gaming and music sessions).

The Xonars are cheaper than the equivalent X-Fi's, but miles better. Go figure.

PC is being rebuilt from scratch (Woo! What better way to spend a Saturday afternoon) and lo and behold.... 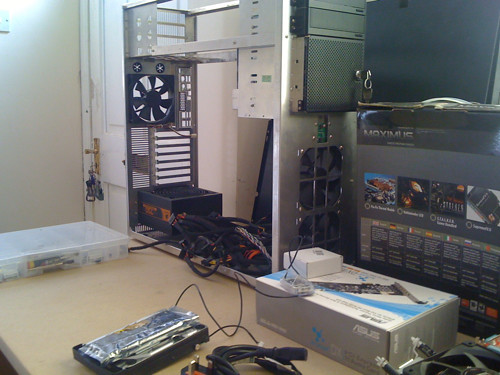 I spy, what do we have here: 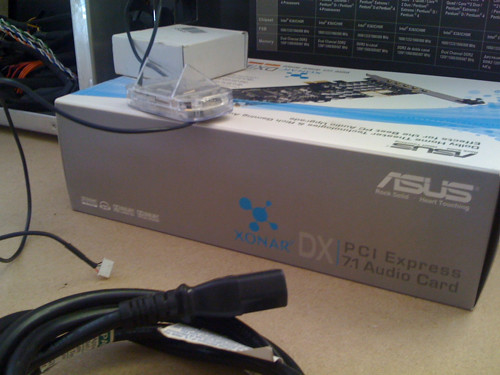 Mmmm, looking forward to blasting some music out of that later

Uriel, if you ever stop by this thread by the way, I have to say the advice I've read of yours in the countless threads in Sound City have been invaluable in choosing my Audio quality

I installed my DX too today, it's even kept me off FIFA 10 - just wanna listen to my entire music collection in improved quality.

Spunj99 said:
I installed my DX too today, it's even kept me off FIFA 10 - just wanna listen to my entire music collection in improved quality.

I'm half way through building the PC - the components are in, its just the two hour cabling job lol!

But need to take a break, need to wake and feed little one, have some daddy/daughter time then put her to bed at 7, then the build can continue.

Lucky you - wait for the new PC to arrive - with a freshly delivered DX in it's box waiting to be installed into it - btw - better sound quality that a X-Fi music? (have one in current PC but moving to a DX for the new W7 box)

Back on the job now. Little has just gone off to bed. Back to PC Building!!

And this Xonar is the Biz!!

Even on these pair of god awful labtec headphones I have atm, the sound quality is so much better over the onboard sound its unbelievable!

Have not had the chance to run some games through it, but so looking forward to getting some Bioshock and Mass Effect action going over Dolby Headphone and the Goldring Dr50s

Arthalen said:
Uriel, if you ever stop by this thread by the way, I have to say the advice I've read of yours in the countless threads in Sound City have been invaluable in choosing my Audio quality

So looks like the DX is a bit of a star

Axil said:
So looks like the DX is a bit of a star

Axil, I'd really appreciate it if you'd post your thoughts on the sound quality of the DX versus your X-Fi Music when you build your new system. I'm considering the same upgrade and am very curious to know how much of an improvement it is.

I just got DR50's & am I'm now on the hunt for a sound card, scrolling down this thread I was hoping you had already tried it all out

A mini review would be brilliant m8. I'm interested in how the ASUS does along with the Goldrings, also how they manage surround etc in games.

Oh btw Uriel is the man

Toastor said:
Axil, I'd really appreciate it if you'd post your thoughts on the sound quality of the DX versus your X-Fi Music when you build your new system. I'm considering the same upgrade and am very curious to know how much of an improvement it is.
Click to expand...

Axil said:
Will do - I'm using Creative p5800 speaker atm as the main hi-fi is in storage (as I don't have room for it any more) but will certainly post what i think
Click to expand...

I have to say it is absolutely stunning and absolutely destroys the X-Fi music I had for music playback even on a lower cost 5.1 speaker set like the creative p5800

Thanks so much for the comparison, Axil.

To be honest, I had been thinking recently that the sound card market had reached a plateau where any increase in quality would be barely perceptible. I'm really happy to be proven wrong and I'm also happy to have a reason to upgrade my X-fi

Well further to my last post - I just waited to re-iterate just how big an impression the Xonar is making on me.

I've currently got Orbital's Blue album playing in the background (an album I have had the honor of hearing the master of ) and I'm re-hearing stuff that the X-Fi neverin it's dreams picked up. This thing just makes me go back through my entire CD collection (and that's about 2000 CDs strong - I used to be in the music business and still part-own 2 music shops) and just listen