It's a "decent" port insofar as we understand that to be that it's the console experience and it runs without major problems. Unfortunately the upgrades it did receive are not significant and it was disappointing to see the low texture quality persist, I was hoping for better there & it was something doable (unlike some kind of RT addition). That it's DX11 means it's going to run poorly on AMD (and it does), and it doesn't have an FOV slider which is a must because for me the narrow FOV on console made me shut it down after an hour. Hopefully fixable with mods, and in any case I can stretch it out by going ultrawide, but still lame.

Overall not too exciting, but I'm mostly negative on Sony titles. Days Gone remains the high point of the current ports for me, at least as a game. Hopefully we'll get Returnal soon, that game deserves to be played with M&KB and at 120 fps.

Agreed, gamers win with a good DLSS and FSR implementation


The article has graphs and videos too. Good article and nice to see both DLSS and FSR on games, this should become the standard.

It got a patch for PS5 and runs at a flawless 60FPS 4K Checkerboard , had it sitting in my library for over a year and still not got round to playing it yet

Hands down the most beautiful game I've ever played on PC.

Uncle_Gravy said:
Hands down the most beautiful game I've ever played on PC.
Click to expand...

It's a class act for sure, this is why Sony does so well with the Playstation exclusives. Happy to see them come to PC and hoping for more to come as there are many older Playstaion exclusives that would do really well too, I don't expect Sony to release any new exclusives but the older ones should really now be allowed to come to pc as most of the exclusives were ps4 titles that we want on PC anyways.


Watch till the end..

Which program is used for the stats there ? It shows allocated and dedicated VRAM details.

The DLSS one looks great I'm having a hard time deciding which is better but the DLSS one looks like it has sharper details and better shadows. Frametimes are much better on DLSS one too and of course more fps and some parts showed over 50% better performance too. DLSS really is now becoming great, first time I used it when it came out I was like meeh blurry mess, now native looks worse on many games...

Using dlss quality here, much better than native+TAA for both 4k and 3440x1440, also not noticing any smearing/ghosting issues like what computerbase found, perhaps nvidias recent drivers fixed it? However, it seems like dlss has overdone the sharpening!

Using dlss quality here, much better than native+TAA for both 4k and 3440x1440, also not noticing any smearing/ghosting issues like what computerbase found, perhaps nvidias recent drivers fixed it? However, it seems like dlss has some overdone the sharpening!

Computerbase didn't have the day one patch so maybe why they saw some of these things and then the driver update too. PC sat here doing an over 100GB update on MSF2020 at moment

, then have to download this from steam that is about 40GB on the worlds slowest internet.

Then I can actually judge it, just sat here watching videos and going ooooh nice...

It's making me want to fire up the ps4 pro and play it but promised myself to play it on pc first fully and then carry on ps4 later if I really enjoy it but only played like 30 mins on ps4 and really enjoyed it.

Thanks for the programs used in the video.

Has anyone noticed that DLSS looks better than native at 1440p?

I've got performance to spare, so don't need DLSS. With everything set to Ultra, the image still looks better with DLSS rendering from a lower res image than actual 1440p native. Even with my old eyes

Wondering if anyone else had noticed this.

Edit: I watched the digital foundry video, and to me the DLSS setting looked better than 4k native at certain points.

DLSS is a game changer, playing 4k DLSS 120hz with HDR on the CX oled is a great experience. Hope AMD can get something of equal quality out.

How to fix the God of War Ultrawide Issue for 32:9 on PC

1) Use Flawless Widescreen program for better FOV control and it also fix Aspect Ratio, don't need to modify the file (In game Display setting, must use Auto aspect ratio option to make this work). https://www.imagebam.com/view/ME6H9TK 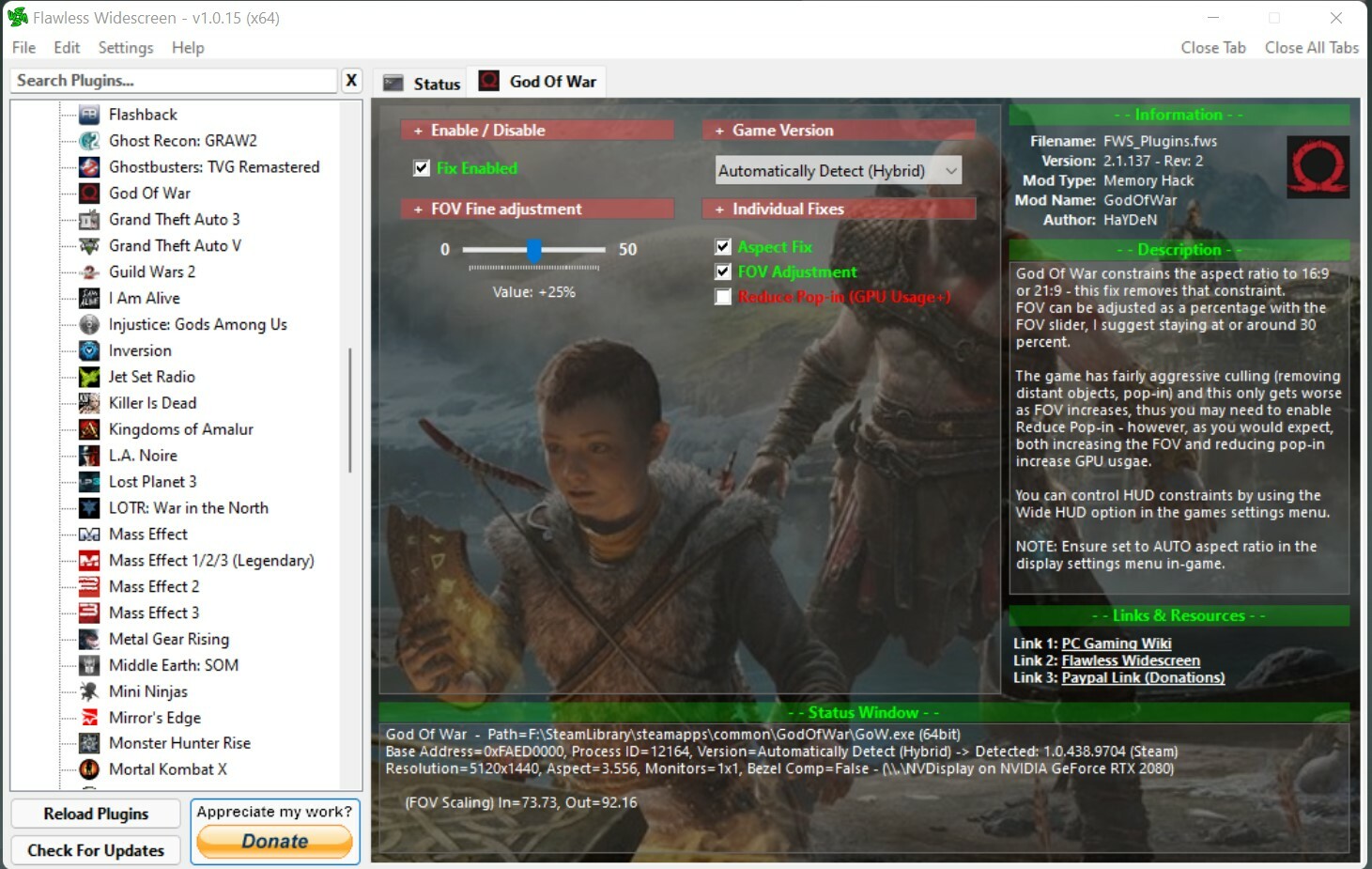 Because this game only runs in borderless, does that mean that Gsync doesnt work with it? Correct me if I am wrong here but I was under the understanding that Gsync only works in fullscreen? Hopefully someone can clear it up.
You must log in or register to reply here.
Share:
Reddit Pinterest Tumblr WhatsApp Email Share Link
Top Bottom