Im off to Hawaii for two weeks in September and am looking for recommendations for things to see and do.

Has anyone been? I think I'll just do 3 islands as I don't have all that much time..

Which islands are you thinking of doing? I've been to Maui, Oahu and the big island and they're all worth visiting for very different reasons.

Maui is great for chilling out, Oahu has fantastic restaurants and shops and the big island is the best for seeing nature.

I take it you haven't booked flights yet then?

Tunney said:
Which islands are you thinking of doing? I've been to Maui, Oahu and the big island and they're all worth visiting for very different reasons.

Maui is great for chilling out, Oahu has fantastic restaurants and shops and the big island is the best for seeing nature.

I take it you haven't booked flights yet then?
Click to expand...

I was thinking the same three.
I've got flights in and out of HNL already.

Those three reasons are the three I want to do! Can't see it worth going to the other islands given the time constraints.

We've been to Kauai and Maui. Kauai is probably the most Hawaian feeling (most of the other islands are like American cities/towns) and is beautiful and very lush, not much to do there but as we went there for our honeymoon it didn't matter. Instead of the helicopter ride we got taken out in a light aircraft which was excellent.

Maui is not so beautiful but there's more to do, if you are visiting the island briefly then a drive up to Haleakala (volcano) to see the sun rise is worth doing and the drive to Hana is quite a nice drive with loads of twisters and switch backs.

I would recommend a day or two stop off at either San Fransico or LA to break up the flight as its a 6 hour flight from both.
Last edited: 14 Jul 2013

Bear said:
I would recommend a day or two stop off at either San Fransico or LA to break up the flight as its a 6 hour flight from both.
Click to expand...

We did San Francisco on the way. We thought we would be able to handle a 20-hour flight going out a tropical paradise but might struggle on the return trip to the UK.

Long story short, doing a stopover in Canada in the way out.

Cheers for the info

We had our honeymoon in Oahu last year in September - loved it even though we weren't able to venture to the other Islands.

We were prepared for the "Americanisation" that Oahu has in particular over the other islands but it didn't bother us, given that we're both fond of America and given that we've been to purer idyllic locations such as Fiji, Langkawi etc.

Waikiki is as commercialised as it gets and very expensive as you'd imagine. Food was pretty good however and the portion size typically American

Book or eat before 8pm or you'll be carrying a pager and waiting a long time for tables.

Pearl Harbour, the Missouri, and Arizona memorials are a must do, and are great experiences. The Polynesian Cultural Center is also a great day out, and you'll get to see a lot of movie locations on the way (50 first dates, Lost, Pirates of the Carribean, Pearl Harbor (obviously))

The other things we did were Diamond Head crater walk which was good, obviously Waikiki and also a surf lesson which I thought I'd hate but our instructor was great and we both had a great time:

Flying out is fine because of the excitement but the flight home is a total grueller. It was two stop on the way out and three on the way back which didn't help. If you are only stopping over one way - I'd have to say to do it on the way back.

Quite tired now but if you have any q's will try and answer tomorrow.
Last edited: 15 Jul 2013

Jammy git. After driving virtually around O'ahu in Test Drive Unlimited 2, I have a burning desire to visit now.

The Challenger that we hired:

My next holiday destination is Hawaii! Although I was very eager to go to Maui having read some personal experiences that it is not as great as it may appear, makes me want to research a bit more! I had heard that Lanai is a really great place to visit, because it isn't commercialised more of a 'getaway island'! Looking at the right time to book though, expensive trip!

Really want to go, very tempting to splurge the savings on it but will probably be next year now.

Location
Here and There...

We went a few years ago, we did stop overs in Vegas on the way out and San Fran on the way back which I would definitely recomend it is a seriously long flight!

I would restrict yourself to two islands if you are only going for a fortnight, I know the temptation is to do more islands but for me doing that you will actually end up seeing less Hawaii. Oahu and the big island for example have easily enough to see and do to keep you busy for a week on each and thats without any chillout time.

We spent 7 nights in Oahu right on Waikiki beach and it was truly amazing one of my favourite holidays the Island has such a laid back feel and the sights are amazing from the iconic Waikiki beach with Diamond head at one end, the amazingly chilled vibe on the North Shore including the mind blowing turtle beach and the stunning sunset bay to the unspoilt natural beauty of the mountainous interior. I can't say enough good things about the place, take plenty of money it's not cheap but well worth it!

Cheers for the info.

Gayjn- is it really worth renting a V8? Aren't the limits like 20 MPH everywhere?

My holidays are normally a few nights and then I move on, but maybe doing Big Island, Maui and Oahu in 10 days is a bit of a push.

I'm probably going to Kauai for a few days at the start too..
Perhaps too much?

What's so special about the Pearl Harbour memorial? It's not something that particularly interests me.

The speed limits are fairly sensible but you've got a lot of bad tourist drivers driving really slowly. Also, expect traffic jams at 5:30am when all of the military people are trying to get to work.

If you do the big island, I recommend the star gazing tour. Here's a pic from the top of Mauna Kea: 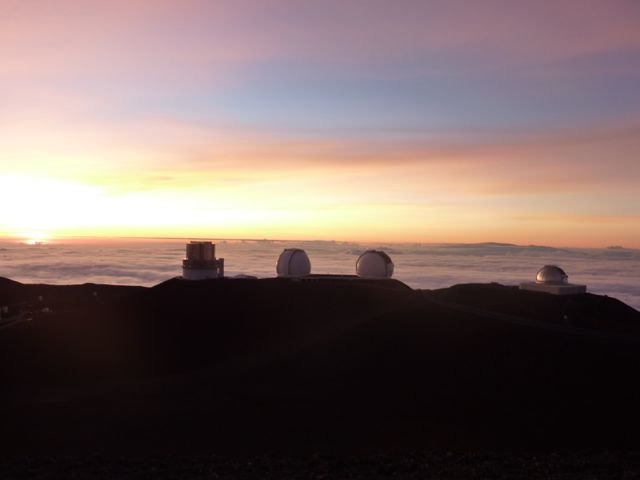 13,802 ft above sea level, just above the cloud line. Apparently the top is a good approximation for the surface of Mars so it's used a lot for testing rovers.

mjt said:
Gayjn- is it really worth renting a V8? Aren't the limits like 20 MPH everywhere?
Click to expand...

IMHO no, I have rented both V6 and V8 hire cars in the US and the V8 has a novelty factor for sure but it's almost never, ever worth the usually considerable extra money you pay over exactly the same car with 2 less cylinders. a V6 Camaro or Challenger still has 300bhp and is not slow.

Corvette is a different matter though as it's a totally different car not the same car with a different engine.
Last edited: 17 Jul 2013

Surf! Ace if you are new to it as good learning waves. If you go already there are so many awesome breaks. If you are not keen on big waves get a stand up paddle board, easy to pick up and the other half will enjoy.
Mustang convertible is a must, as really is not much more than any other rental car.
We did helicopter tour of Oahu which was ace.
Hanauma bay is great for a snorkel with the turtles.
As mentioned Diamond head crater is worth the walk and views.
Maybe watch the Hawaii Warriors in Aloha Stadium (there on 28th sept). Watched the pro-bowl there and atmosphere is ace.

The grumble of a V8 never wears off!