Lube at the ready gamers.

Some news on the upcoming flagship NVIDIA graphics card.

We received some initial specs of the upcoming GeForce RTX 3090 Ti SKU, that have been shared with board partners recently. According to the information, the card is not called RTX 3090 SUPER, but RTX 3090 Ti. It not only features more cores but also many changes to the memory subsystem, power configurations, and more.
Click to expand...

RTX 3090 Ti 450W TDP and new PCIe Gen5 power connector?
Starting with power configurations. The RTX 3090 Ti allegedly will have a TDP up to 450W, a 100W more than the ‘original’ 3090. We do not know if this is a final TDP or whether it applies to a custom card, only that such TDP is listed. This claim is not entirely new, it has already been leaked by Kopite7kimi a while ago, however only now we were able to confirm that such specs are listed on the roadmap.

What the initial rumors did not say is that the card might feature a new power connector, and that does not mean Molex Microfit 12-pin connector, but supposedly a new standard for PCIe Gen5. We have only heard about the 16-pin connector (which also appears in MicroFit format), but this information is still behind embargoed electrical specs of the new interface. Hopefully, the embargo on Gen5 will end once compatible motherboards are released next month.
Click to expand...

RTX 3090 Ti memory upgrade: 21 Gbps/2GB modules
We have further confirmation on 21 Gbps memory for RTX 3090 Ti. The memory alone may be the reason behind high TDP. What was not said before, however, is that those are 2GB modules, not 1GB as on current models. What this means is that the reference card will have a new board design, so we are told. Interestingly, the rumored RTX 3070 Ti 16GB is also said to have 2GB modules, but that card will not require a new PCB.

RTX 3090 Ti in January 2022
The card is now expected to launch In January alongside RTX 3070 Ti 16GB and RTX 2060 12GB. The most current roadmap that we have seen does not list any SUPER variant, which may be planned for later or not planned at all.

GeForce RTX 3090 Ti GPU specifications are more or less known at this point. It’s a full GA102 GPU with 10752 CUDA cores (84 SMs) and 24GB of GDDR6X memory. Faster memory will result in over 1 TB/s of theoretical maximum bandwidth.
Click to expand... 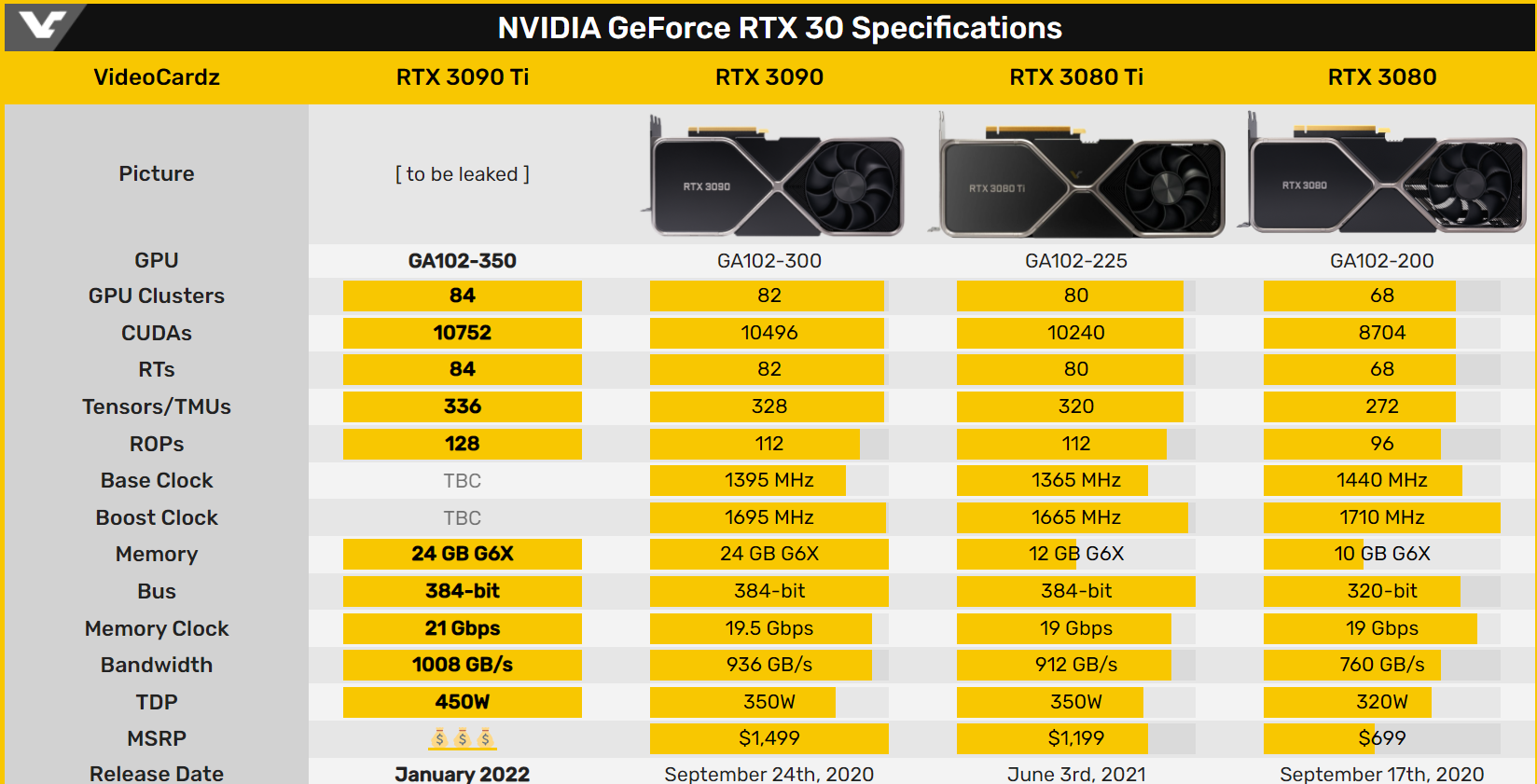 I hope they bundle free Gelid Thermal pads, thermal paste, screw driver set, so you've got everything you need.

Could be a warm January!!

^ doubt it will be that expensive given the minor spec bump over the 3090. Maybe USD $2000. With the new 2GB memory modules it may even be cheaper for Nvidia to make but it would be hard to see any such cost reduction, if there were one, passed onto the consumer in the current climate.

stephenb said:
^ doubt it will be that expensive given the minor spec bump over the 3090. Maybe USD $2000. With the new 2GB memory modules it may even be cheaper for Nvidia to make but it would be hard to see any such cost reduction, if there were one, passed onto the consumer in the current climate.
Click to expand...

I'm holding out for the Titan super/Ti

^ ah, should have made clear I was referring to FE pricing only.

I'd genuinely prescribe a therapy session to anyone even contemplating buying this.

Dicehunter said:
I'd genuinely prescribe a therapy session to anyone even contemplating buying this.
Click to expand...

But they are "worth it"

How the more money than sense spend their money would be no of interest to the rest of us except that - as many predicted - they are causing huge inflation for the rest of us.

stephenb said:
^ ah, should have made clear I was referring to FE pricing only.
Click to expand...

Maybe there wont be one as the thermal tissue cant cope and only be AIB's.

And totally unaffordable for the majority of gamers. Can't wait.

Still won't do 4k properly at good fps without DLSS

Is this some kind of joke?

This puts the 3080 another tier down the hierarchy to mid range casual gamer status.

Some idiots will fall for it. Probably a few on here no doubt.

CuriousTomCat said:
This puts the 3080 another tier down the hierarchy to mid range casual gamer status.
Click to expand...

Yet it chews up and spits out everything I throw at it with ease. Top tier is just becoming utterly pointless these days.
You must log in or register to reply here.
Share:
Reddit Pinterest Tumblr WhatsApp Email Share Link
Top Bottom