Hello.
Im new of this forum.

I buy the new case Phanteks enthoo pro 2 to upgrade my old case Asus tuf gt501. The reason is because my liquid temperature after 1 hour of game reach 40 degrees celsius, and i think its not normal.. I have 20 degrees in my room.... 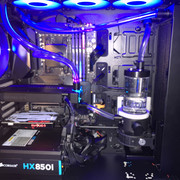 Now i need help how to configure my new case.. I also bought a new radiator, Ek coolstream PE 360

So you weren't happy with temps, which look like they might have been reasonable... and you went out and bought a new case *and* a new rad? What help could you need? With 3x 360 rads if you don't get temps you're happy with then you're unlikely to ever be happy.

but i think its not normal in winter to ave this temperature..
The limit of delta is around of 10 degrees while i have 20 degrees...

Well have you tried changing your fan configs? Could you give us more info about the setup, maybe what speeds your fans are running at?

If you've already bought the new kit it's probably too late, but I would guess there's a lot that could be done to optimise what you have without going as far as buying a new case and a 3rd rad! Have you checked your flow rate, your blocks etc? When was the last time you changed the fluid/did maintenance? There are a lot of things you could check that you haven't mentioned if you've done, so we have to assume you haven't...

The custom loop is new...
im using the fan in push in to radiator. I tried to change the positioning fan but nothing..
My fan reach the 1400rpm.
I checked my flow rate and is good

What type of fans are you using?

I like to keep things cool, and during the height of summer when it was over 30 degrees in my flat, I just stopped gaming.

A 3rd radiator will definitely help you, but also going push pull on your XE radiator would help a small but noticeable amount, I think.

i think the coolant temp is perfectly reasonable and nothing to worry about. Even mine gets to around that if i'm playing light gaming or mining and mine is in a small case (Lian Li Mini) with radiators in push/pull etc.

Rather than a new case and rad, which i would think is bit of a waste, i would've checked the most obvious being fan configuration and fan curves. I have set mine so if the coolant temp reaches 35c, to ramp up the fans slightly to keep it under control.

I'd only start worrying if you coolant temps were 50+ to be honest as most tubing is rated up to 60c.

ps.. my room is around 20c, but gets warmer to around 25c as i stick on my heater.. which is right next to the rig

Unless going very high rpm on the XE, there's loads of potential performance wasted. XE will escalate pretty good using push/pull 800-1000 rpm. PE rads don't benefit from push/pull.
My delta with 3900x + stock voltage RTX3090 was between 6-8 during gaming, but if I really pushed on benchmarks, would stays close to 10C.
Was using the O11 XL, which is perfect for triple rad, yet the airflow cool everything else inside the case.
The O11 XL, I was using the XE at the bottom as intake, push/pull. PE on side as intake (can be push, if fans are in the second chamber and rad in main chamber, or the other way around). PE on top as exhaust, push.
The second important thing is make sure that the rad which comes after the waterblocks is the exhausting one. The worst of the heat will be dumped straight outside the case, and the other 2 rads working with cooler air from ambient will "prime" the coolant before it reaches the blocks again.
Loop order doesn't matter, but going down this idea, you'll optimize your system, and even when the second and third rad dump air slightly warmer inside the case, no biggie, as won't be hot enough to affect anything, and even affecting slightly the exhausting rad by 2 or 3 Celsius, the coolant temperature will be "fixed" by the second and third rad.
I was considering the Phanteks for a while, but decided to go with the O11 XL, as despite support for smaller rads, you can run triple 360 easily, making the case look full enough but not crowded.
You must log in or register to reply here.
Share:
Reddit Pinterest Tumblr WhatsApp Email Share Link
Top Bottom