Pumps not pumping around custom loop

Firstly, really appreciate the forum, reading all the posts here I plucked up the courage to try my luck at my first custom loop!

The issue I'm facing is, I've built the loop (it's a mess I know lol), there aren't any apparent leaks but the water isn't being pumped around the loop. I didn't think there would be an issue with 2x D5 res/pump combos? There are some long runs though as it's The Tower 900.

I didn't think there was anything wrong with the waterblock or GPU blocks, all pressure tested as individual components before putting them in.

Is my mistake not creating 2 separate loops here? 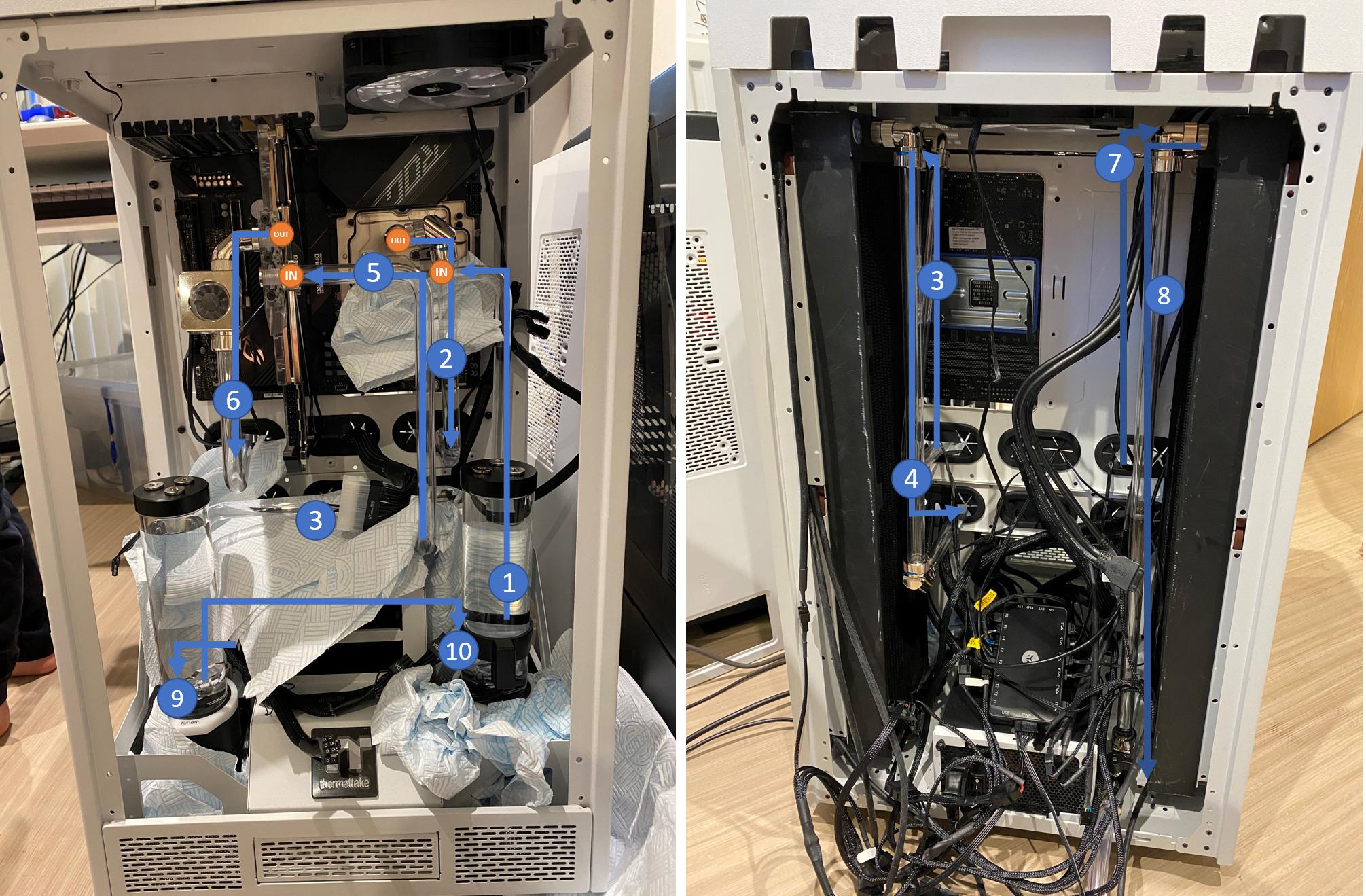 1. First EK D5 Res, outlet on the right goes straight into the CPU waterblock. But it doesn't even pump past this
2. Waterblock out (into first radiator in)
3. Into the EK 560 Radiator at the back
4. Radiator out (to the GPU now)
5. GPU in
6. GPU out
7. Into the 2nd EK 560 Radiator at the back
8. Radiator out, right down to the bottom where the splitter is, to both the drain valve and the 2nd res
9. Into the second res/d5 pump combo
10. Pipe that connects the 2 d5 res combos together

Both reservoir's are filled to the brim but I can't open the lid of res, it would explode water out (probably gravity/levels?). I'm so confused now. When I turn it on, the res water levels do not drop as expected and nothing gets pumped around. I've checked and switched around molex's for the pumps. Any ideas?

I would start with disconnecting the PWM connecters for the pumps from the controller (if any) & power the pumps (to get max speed). See if that gets the fluid round the loop.

first double check the pumps are working, you should hear them regardless if the loop is flowing or not,

concerning for me is opening the res should not allow the water to just explode out, that to me would suggest a large air blockage causing a return pressure on the pump. when you filled the system did you tilt it around to remove the air from the rads as a large air blockage could completely stop the flow in a system of that size. looking at the set up being similar to mine that loop would take at least 1.5 to 2 litres of coolant.

also not asking you to eat eggs but you did check both pumps are using the correct input and output positions, water would flow through the loop from res 1 all the way until res 2 until the system is full then it would just stop if you'd muddled the connections up, that seems also like a likely scenario as you somehow managed to fill the loop. imagine pump 1 pumps to pump 2 and then pump 2 try's to send it back where it came from creating a standoff, flow would stop completely.

also there is really no need for a second pump res combo, a single would have sufficed for that loop but if you wanted a fail safe you could have installed the D5 without the extra res somewhere in the back of the case,

when filling, it is never good to try to fill the system before turning on the pumps.

To fill this one, first empty it. don't disconnect any tubes or anything.

Then connect one pump to a PSU with a jumpered 24-pin. not to the motherboard.

on the res of the unused pump open one of the top ports.

half fill the planned pump's res and turn on the power. if the pump does not push any water come back to us.

bottom line: never try to fill a loop manually, let the pump do it with a gradual topping up of the reservoir.

You guys are all legends, I followed your advice and it all worked. It was definitely the PWM connectors firstly (thanks Van Diemen), disconnecting those started the pumps immediately, plus I ended up disconnecting one pump as suggested (thanks biojimmyauk) and flow was still fine. Point noted on filling the loop manually and yep I forgot to open one of the top ports of the unused pump (cheers MIkeTimbers).

Simon L said:
You guys are all legends, I followed your advice and it all worked. It was definitely the PWM connectors firstly (thanks Van Diemen), disconnecting those started the pumps immediately, plus I ended up disconnecting one pump as suggested (thanks biojimmyauk) and flow was still fine. Point noted on filling the loop manually and yep I forgot to open one of the top ports of the unused pump (cheers MIkeTimbers).

Really glad you got this sorted