Question about SSD's, especially PCIe 3 and PCIe 4, but also a couple other questions.

Location
Front of the PC

Going to get myself a SSD's for the OS, but the board I have support either PCIe 3 or PCIe 4, it is the Gigabyte X570 Aorus Master.

So is there any other difference then just the speed (I am guessing the main difference is the writing speed ? ) and is it worth the almost double price difference between the two as well ??

It is mainly for the OS now, but later I will also get another for Steam/GOG/uPlay. Just need to figure if it worth the extra cost or not, so here I am asking you experience PC builders/users !

Also, while on the subject of SSD's, tried to asking in the X570 Aorus Master thread but no luck there.

If I am reading this right, the two first slots for SSD can be used by either a M.2 PCIe or SATA drive, but the third slot has to be a M.2 SATA drive, or I will lose the SATA3 4 and 5 slot ? 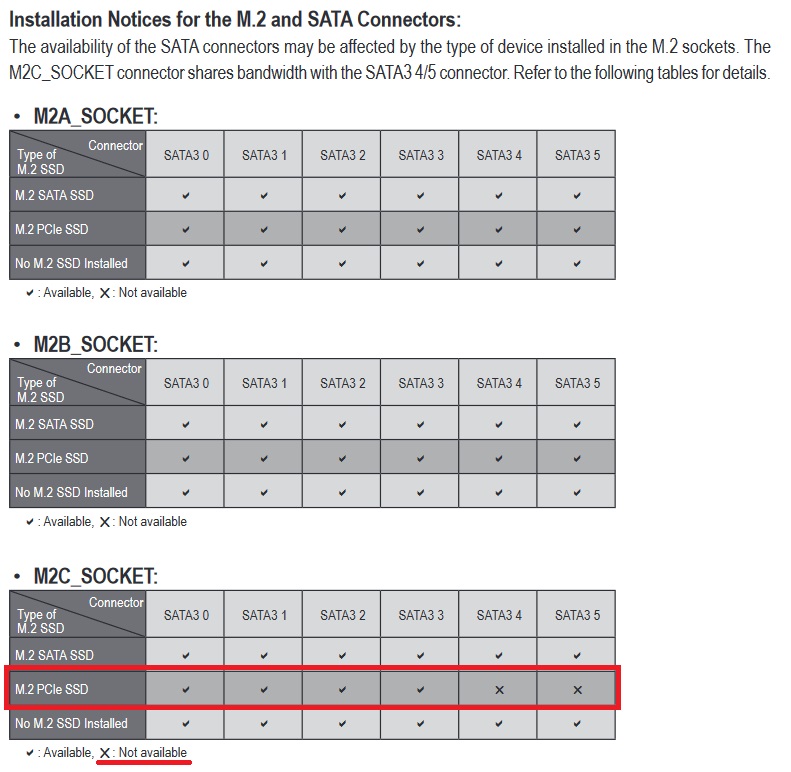 And while at the subject of difference of things, in regards to PCIe and SATA, is there a noteworthy difference between either ?

And a Happy New Year to you all !

It's reads which can use connection bandwidth more than writes, because read speeds are sustained speeds.
(except if drive gets too warm and has to throttle)
Again after some amount of continuous writing, those sequential write speeds drops down to lot lower level.
That happens because drive runs out of fast to write SLC cache space and has to start writing directly in TLC mode.
(with fuller drive write speed can "fold" further when drive starts converting that SLC cache to TLC to make room)

And never use limited in numbers M.2 slot for SATA SSD.
Those are equally fast in end of that cable.


Doubled price per GB of PCIe v4 drive isn't worth it.
Unless you have "enough money to raise cattle by feeding them bank notes."

Especially Windows isn't demanding on that.
Normal booting of Windows is really mostly loading of hibernation file with minimal IOPS load and neither amount of data is such big.
Hence even SATA SSD wouldn't be in human scale significantly slower than NVMe SSD.
And once Windows has loaded, it doesn't do much any disk operations.
(unless you have too little RAM and "page file" is used constantly)

Though even basic NVMe drive has couple times the read speed of SATA's bandwidth and loads big demanding games some seconds faster... While costing only minimally more.
So unless having no free M.2 slots, NVMe drive is good for more potential with future games.


Again hyped fast start up of games in new consoles has very little to do with the absolutely highest mass storage speed.
They simply hibernate that game, writing state of its code in memory to drive.
And if PC games were loaded same way, already PCIe v3 drive could dump out 3GB of sequential data per second...
Meaning RAM usage of typical game filled in couple seconds.

Also hyped on the fly streaming of textures etc for instant new level loading was devised, because of new consoles having small generational memory increase:
They simply lack RAM to use as buffer for loading data on background.
In new Xbox 10GB of that 16GB is intended for use of GPU.
And remaining 6GB used as RAM is shared between operating system and game. (and would be completely inadequate RAM in PC)

Again in high end PC there's lot more memory to use.
Except for skimping Nvidia, new graphics cards have same amount of VRAM as new consoles have all of memory.
And if you have high end PC with 32GB of RAM, that's "only" five times as much as 6GB in new Xbox...
So with smart coding games could equally easily do those instant new level loads in PC even with PCIe v3 NVMe.

Location
Front of the PC

Thank you @EsaT that helped alot.

So, a M.2 SATA is pretty useless to have then, just go PCIe instead. Could gain those two missing SATA3 slots back by using a SATA controller card instead.

And most definitely don't have enough money to raise a cattle by feeding them bank notes !

Appreciate your reply, gives me a better idea what to go for in the future. Thank you again !

TheSwede said:
So, a M.2 SATA is pretty useless to have then, just go PCIe instead.
Click to expand...

Whole M.2 was devised for laptops for more compact drives than 2.5", so designers stuck also SATA into it.
M.2 is similar charlie foxtrot to USB-C in that it isn't exact specific bus, but possibly whole lots of different buses...
Or not, because of motherboard possibly supporting only one bus in it!
At least X570 boards support both NVMe/PCIe and SATA in all M.2 slots.
Same can't be said about most chipsets.

For different drives Kingston A2000 and WD Blue SN550 are bang per buck choises for tight budget.
Sequential read speeds are quadrupled compared to good SATA SSDs giving headroom for future games.
And they use TLC Flash instead of race to the bottom of trash barrel QLC Flash like in Intel 660p and Crucial P1.
(whose write speeds fall below HDDs after running out of SLC cache)

After that come drives for not the strictest budget.
Like Phison E12 based Corsair MP510, PNY CS3030, TeamGroup MP34.
Many of those have write endurance specification beating everything else.
Also WD Black SN750 and Seagate Barracuda 510 are good drives, with Firecuda 510 again having top level TBW spec.

Sabrent Rocket (not Q) and Adata SX8200 Pro would be other good drives for gaming.

Except for more serious discounts Samsungs are really more or less brand overpriced.

I recently received my custom built system from OC and the WD Black 1TB SN750 M.2 2280 NVME PCI-E Gen3 Solid State Drive installed in M2C socket so I have lost the 4 and 5 SATA slots (Gigabyte Aorus Z590 Master Mobo)
Is there any reason why I can't just move the SSD to the M2A socket? Is there a trade off or performance cost putting it in M2A socket? I would like the Sata slots back.
Thanks

cgrant said:
Is there any reason why I can't just move the SSD to the M2A socket? Is there a trade off or performance cost putting it in M2A socket? I would like the Sata slots back.
Click to expand...

So currently nothing in M2A or M2B? Go for it there's no drawback. Bit of a rookie mistake of OC to put it in M2C

Great, thanks! Swapped over to M2A and seems to be fine. Now have all SATA ports available as needed. Was surprised that OC just installed it in M2C, although maybe they figure not many people will use up six SATA slots.

They shouldn't assume! It's a custom build rig from OcUK of all places, so the system builder should be thinking about these things. Either way, problem solved so all good. Maybe someone should slap the builder with some empty Haribo packets however as punishment.
You must log in or register to reply here.
Share:
Reddit Pinterest Tumblr WhatsApp Email Share Link
Top Bottom