Nexus18 said:
VM still not fixed packet loss so a no for me

Your interwebz in fully potato.

JOSH86 said:
Your interwebz in fully potato.
Click to expand...

Yup always happens at this time of year

Can't really complain though as it is only the packet loss, still getting the 150MB and decent enough latency as well as a discount so

Is your potato up to speed again yet then?

Had some really enjoyable games recently. Much salt

When you're failing on bf1, pwn on bf4

Yeah bf1 has been hit and miss for me recently, I'm still plugging awayy at it. I'm playing better than I was about 3 weeks ago, but 2-3 of us are struggling to swing rounds when we are on a rubbish team. bf4 however even when I'm playing badly it gets messy for the other team.

Xonatic and I were both pretty drunk on Friday night and we still turned the server.

bf4 is easier than bf1 tbh.

unless you a vehicle player and that rules you out completly

unless you a vehicle player and that rules you out completly

You can't really reliably be a "vehicle player" in bf1, the vehicle spawn system is so broken. You don't seem to get the tanker without a tank problem anymore, but you do get:

-Vehicles taken before you get to the start screen
-Attempts to change which tank you want cause you to lose the tank to someone else
-If you keep losing your backcap, then you can be in a situation for ages where your team has no tank at all, as when you recapture your backcap, it resets the spawn timer on your base and backcap. If you sit waiting for the tank, the other team will recap your backcap before your tanks respawn, resetting the timers. This means that one team can have up to 4 tanks on the go while the other team has none because all the infantry have zerged off to less strategically important flags.
-You finally get a tank, but your entire team is at the wrong end of the map and you're surrounded by the other team.

The game rewards people too much for capturing any flag (especially with squad orders) but puts no value on which are strategically important to win the round.

Then you've got the people trying to do something unhelpful 10 times in a row so they can get their medal!11on1!

Oh how you all make me laugh, bf 4 easier than bf 1, such noobs

BF 4 only seems easier cause you don't have game gimping mechanics that puts everyone on the same level playing field as in bf 1, take away those crutches for the **** players and they would get annihilated

That and also because they took the gun mechanics and completely changed what we have been used to 6+ years.

DICE/EA are all about casuals and catering to them now. I don't think I will be buying another BF title in the future unless it goes back to the perfect balance it had between arcade and sim i.e. bc 2 (hardcore mode), bf 3/4 and besides, I'm pretty bored of the standard modern and WW era FPS shooters now. And don't even get me started on the vehicle combat system for bf 1... Complete and utter zero skill involved now, especially for dog fighting/air combat...

EDIT: Thinking about it... I suppose you could say that bf 4 is easier since technically it is... as in, not only are you having to fight the enemy team in bf 1 but you are also having to overcome the utterly retarded mechanics of the game

And speed is fine, still get constant 150MB, packet loss problem is still there so until it is fixed, no online games for me

I never said it was easier, it feels easier because I'm practiced at it.

Thinking about it... I suppose you could say that bf 4 is easier since technically it is... as in, not only are you having to fight the enemy team in bf 1 but you are also having to overcome the utterly retarded mechanics of the game

So yeah, you could say bf 4 is easier

If it's easier, it's because you only have to fight the other team not your team as well..

And there is that!

That is the only reason why I would buy the game, just sheer trollage to be had with it

Feel the need for some more Friday night BF4 tonight, going to start with a bit of Bf1 first though.

Will be on tonight if its ok to join you guys?

Feel free, I don't know who will be about on Discord (Hence I was blowing the metaphorical conch as Squeeze liked to say).

Appears noone is online yet! 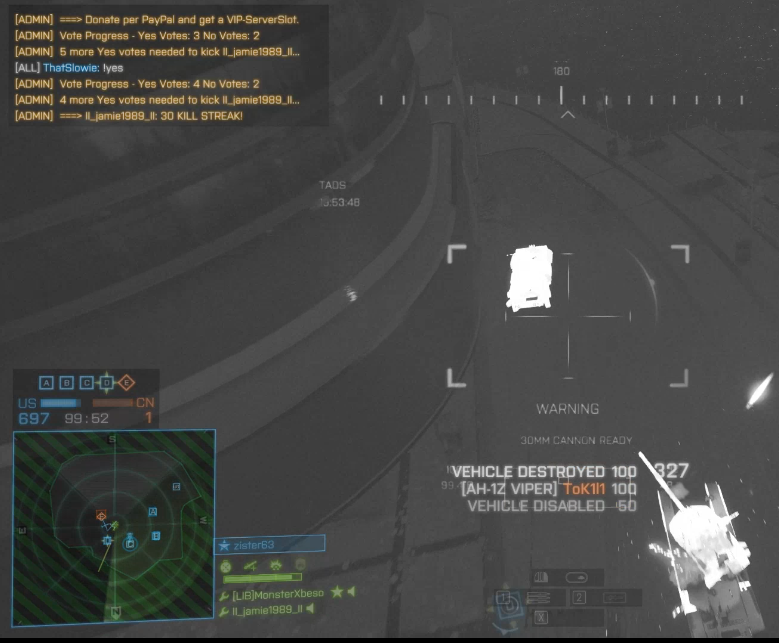