Well these are strange anybody read about these before I happened to come across this site and found this images and what not. Who made them and are they real?

The Georgia Guidestones is an enigmatic granite monument situated in Elbert County, Georgia. Also known as the American Stonehedge, the gigantic structure is almost 20 feet high and is made of six granite slabs, weighing in total 240,000 pounds. The most astonishing detail of the monument is however not its size but the message engraved into it: Ten rules for an “Age of Reason”. These guides touch upon subjects that are associated with the “New World Order”, including massive depopulation, a single world government, the introduction of a new type of spirituality, etc. The authors of those rules have requested to remain totally anonymous and, until now, their anonymity has been duly preserved.
Click to expand... Made of Pyramid blue granite, the Georgia Guidestones are meant to withstand the test of time and to communicate knowledge on several levels: philosophically, politically, astronomically, etc. It consists of four major stone blocks, which contain ten guides for living in eight languages: English, Spanish, Swahili, Hindi, Hebrew, Arabic, Chinese, and Russian. A shorter message is inscribed at the top of the structure in four ancient languages’ scripts: Babylonian, Classical Greek, Sanskrit, and Egyptian hieroglyphs.
Click to expand...

Look expensive for a prank? 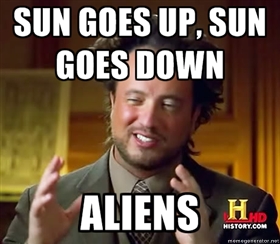 Humankind would never be able to adhere to those rules. There are too many selfish people populating it.

I haven't heard of this before, thanks for the information. Intriguing.

Constructed in 1979..
And debunked here

yes but who is RC Christian and what or who is the group he represented that article doesn't clarify that does it?

I've just watched Ancient Aliens 310 and I just want to kill him.
I spend all the program shouting 'no' at the TV.

Well, we can only work with what is in the OP which in this case was debunked 30 years ago. A quick Google would have told you this.

What exactly is so mysterious about some new world order nuts putting up a bunch of granite blocks in some kind of homage to Stonehenge?

What do you mean, "debunked" and "hoax", it's a monument put up about 30 years ago by some guys, not much to debunk really.

Who put it up ? Thats what I wanted to know it states when it was erected but not my whom. The reasons are given and pretty clear so no need for debunking as stated.

Castiel said:
What exactly is so mysterious about some new world order nuts putting up a bunch of granite blocks in some kind of homage to Stonehenge?

A man turns up at a granite quarry with a request to commission a huge and precisely constructed astronomical monument. He wishes his real identity to remain anonymous and money is no object to him. He supplies the specification and the location for the monument, order's it built and dissapears. What isn't mysterious about that?

I found the wired.com article a very interesting read. Thanks

It's somewhat interesting, not least that anyone would pay a not insignificant sum to have such a monument erected. However - why put it in Georgia? Is there something about the location that makes it especially suitable for instructions to the survivors of some, as yet unknown, apocalypse? Is it just that they've got the chunks of granite there and if so then what makes it a likely location for the survivors to look?