I am seriously thinking of buying one for a bit of a project and a bit of fun. Is there anything i really need to look out for when buying one as obviously they are getting on a bit now.
What are they like on the road?

In my experience they are pretty reliable, the only serious issue is the big end 'can' go, but youll be able to tell when you run it if its on its way out, (lots of knocking) apart from that the regulator rectifier and battery go but they are pretty solid reliable bikes, rev really high and have a good amount of power for a 400 and handle well with the right rubber.

Just check the normal things like cooling system, how much oil is in there, any service history etc the lower radiators are very rare and expensive so check the cooling system is in good order (run it for a while and check it stays cool) apart from that its just general electronics to check which would be the same on any bike! 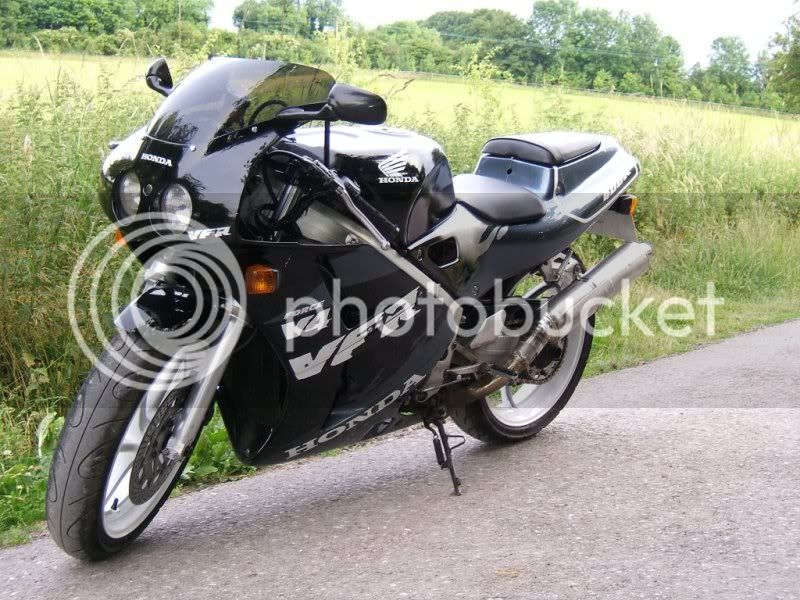 I have had a LOT of fun on it so far its very very chuckable and is good for someone reasonably new to biking.

On the road they are good, mine has a fairly short clutch travel but thats due to the clutch being a bit worn, they rev farily high for the speed they go in but cruise quite happily at 80+ (had a little play with an old 911 today at 110)
Last edited: 8 Oct 2009

Rich1988 covered pretty much all the points I think, worth heading over the http://www.400greybike.info/newforum/index.php which is a general 400 forum but a very active V4 section for the honda's.

I do love them, not ridden mine on the road for a while now as it's a racebike now, but looking to make one up from spares for the road again (I recently bought a second race bike and more spares than I know where to keep

Most parts are still available brand new, if not pattern or replacement parts are available (eg lower rad, original honda stuff is fairly rare, but although it's a bit costly at ~£300 Rick Oliver makes a brand new lower rad, which is actually better than stock, got one of his upper rads and it's very good quality), so getting parts is easy,

Maintenence however is a bit 'meh', some things are fine, others are a pita due to the V4 being crammed in, as an example I'm about to replace the front head on mine due to a knackered exhaust stud, can't do that with the engine in situ, but probably could do the rear head. but that depends on whether you'd actually be doing your own maintenence of course

also the V4's do sound very nice with a good can! Very unique!

They do sound nice with a good exhaust, got a twinstack on mine which looks lovely too (not my bike

< Thats the tyga one, picture shamelessly stolen, but not hotlinked

I only have a viper can but it still sounds nice!

Thought this thread was on about a Sammy nc30, maybe a 13" netbook or notebook on the cards, my bad. Nice bikes though lol

last bike i had 4 years ago was a zx6r which i loved but i could not get all the kids on the back so it had to go!. I have always fancied one of these as a toy and something to tinker with and peoples experiences seem pretty positive regarding them. looks like i will be looking for one in the next couple of months then