Building a Frame around a wall mounted TV

At the moment we have a Samsung Q7F tv, it's nice and neat due to the One Connect box and we just have the thin fibre optic cable going from our tv unit to the TV. You can see it, but it's not overly noticeable.

It's had an issue where the ARC function doesn't work so i can't use a soundbar via HDMI, and also the TV switches itself off which Richer Sounds have been trying to fix since October (the switching off issue has got progressively worse with each repair attempt).

After yet another failed attempt yesterday, i've spoken to Citizens advice to see what my rights are about rejecting the tv and asking for a refund/replacement and am waiting to hear back from RS today.

Should they accept my complaint and offer a store credit, i'd likely replace with either an LG OLED or the Samsung Q90. However both of these would require various cables going into the side of the TV and in the case of the Q90 a thicker tv in general.

Due to the shape/layout of my room, the side of the tv then becomes very noticeable and it'd be quite unsightly. I was thinking about building a frame around it similar to this 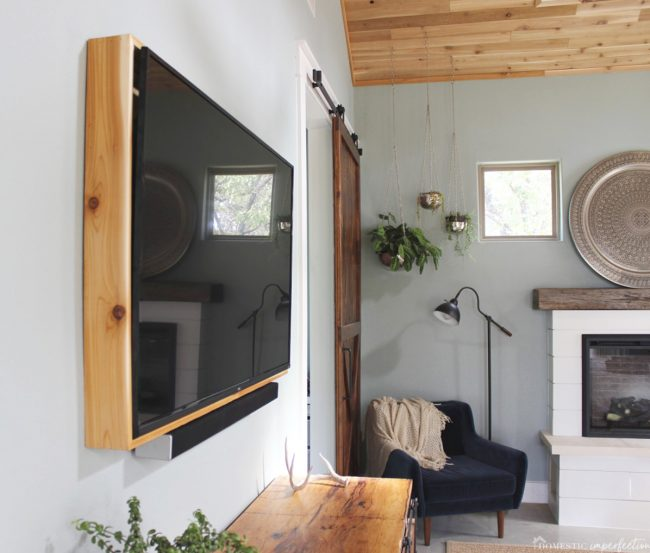 I could then have a matching piece going down to the TV unit hiding any cables as i'm not going to channel the wall out for them.

My worry is about the TV overheating. Would doing something like the above, but having vent holes in the top section be sufficient or could it cause problems?


Also something i've never really tried so far, how does it work if i was to connect my Xbox/Nvidia Shield to the Soundbar via HDMI. Would the tv still show them as inputs or would i always have the switch devices via the soundbar?

Finally. Is there a benefit to having a matching soundbar-TV brand? The soundbar is a Samsung Q900T. I know if i go with a Samsung TV there's a benefit where it also uses the TV speakers for some sounds, but other than than is there much difference in functionality?

I'm amazed you are having trouble with RS . they are usually outstanding !!

as much as it loathes me to mention Av forums , i would put a post on there and mention RS . it should be sorted in a day or so they are all over that site like a rash

signs said:
I'm amazed you are having trouble with RS . they are usually outstanding !!

as much as it loathes me to mention Av forums , i would put a post on there and mention RS . it should be sorted in a day or so they are all over that site like a rash
Click to expand...

Might go there next. Apparently they're entitled to 3 repairs. The issue being each repair seems to involve around 4 engineer visits and replacing the same part multiple times and then having lengthy delays ordering the replacement part in! One time they took it back to a workshop but couldn't recreate the issue and therefore won't count it as an attempted repair. Even though they could a prior and after repair attempt for the same issue!

They don't seem to care how long it's actually taken. I'm supposed to hear back today so will wait till 5ish and then post something on AV forums.

Well i managed to escalate this sufficiently to the point that they've agreed to replace the tv with a "like for like" exchange. The only real life for like item is the top end Q95T as that comes with the One Connect box, will be interesting if that is offered to me.

I'm not expecting so, but happy to pay the difference between my purchase price to get the better model. Ideally i'd be able to go up to a 65" if they let me too, you'd think it'd be in their interests to let me pay more!
You must log in or register to reply here.
Share:
Reddit Pinterest Tumblr WhatsApp Email Share Link
Top Bottom