I'm having a super weird issue where Character, Weapon and Vehicle models are deforming (wobbling) but only in Call of duty Warzone (Not the same as the current gun glitch) and Escape from Tarkov.

I've tried many things to fix this issue including reseating every bit of hardware in my PC, Flashing the BIOs, Reinstalling all Drivers and Windows (And then drivers again), Rolling back the drivers, Doing the suggested fixes for the 5600X for warzone, enabling XMP (Different name on ASUS Mobos), Swapping RAM to test if its dead and Testing a different 1060 model. I cannot find anywhere else that describes this problem nor can I find a potential fix for it, I believe its either going to require a new GPU or a patch for theses games. i was wondering if anyone else has seen a similar issue or has any thoughts on a possible fix?

I have 2 5600x running at the moment and only issue is i have is with chipset drivers one will take the chip set drivers and allow me to change the power plan other wont show the AMD power Plan lol. Both same Boards same bios and same NVME's

Set cpu and ram to stock (optimized bios default, ram should be like 2120mhz or there abouts), set gpu to stock - make sure on latest bios for mobo and gpu driver. Make sure all latest windows updates installed.

Then run the game, is there issue still happening? Does the game ever crash? Check event viewer to check for any graphics driver crashes.

If the game isn't crashing, there is nothing in event viewer and all your components are bone dry stock and you have all the latest updates - then I would lean towards this issue just being the game itself and the developer will need to fix its game

sounds like an issue just with that game then, developer needs to fix it or maybe a new gpu driver can

i've got a record of this issue below

Issue is present in COD:Warzone and Escape from tarkov (And maybe a couple VR games but I haven't played them before installing my new CPU), Its strange because its not a complete graphical breakdown (and not every game) like I would expect if my 1060 kicked the bucket. Its very frustrating to buy a lot of new stuff and it make things unplayable.

Its a Corsair Fully modular PSU, Its either 500, 550 or 650. I can't remember and can't check without unpluggin and Opening up my PC

Pelletmonkey said:
i've got a record of this issue below

Issue is present in COD:Warzone and Escape from tarkov (And maybe a couple VR games but I haven't played them before installing my new CPU), Its strange because its not a complete graphical breakdown (and not every game) like I would expect if my 1060 kicked the bucket. Its very frustrating to buy a lot of new stuff and it make things unplayable.
Click to expand...

TBH im not sure what hardware it could be, I've made sure the ram is working and tested a different model of 1060. I've just finished a full reinstall of Warzone by uninstalling, removing all the temporary files and reinstalling but issue is still present

Turns out it happens In Due process too

also what temp is that GPU hitting?

Does this persist in all titles if you drop your in game video settings down to lowest preset? If reducing load on GPU removes the artifacts then check the following, if card has 2 pice cables connected check both are firmly plugged in and one hasn't come loose. Check these cables at PSU too if modular psu. Monitor power draw and temps of card if possible to ensure its getting enough juice when running at full whack

As others have said, clean driver install, remove existing drivers in safe mode then install latest none beta driver for your card

So it looks like a single 8pin pcie connector, if it's loose you'd definitely notice issues aside from the artifacts

Max power draw is around 180W, so your 500W PSU should be ok, I would maybe try a different pcie socket on your psu if modular though

if there is something wrong with GPU at every res there will be issues.

run some stress test on GPU using 3D mark on loops and furmark to see the temps etc.

I've reseated everything before, and reinstalled windows, the games and all drivers the other day, didn't seem to change much. I've underclocked the GPU but that also didn't prevent the bug
[QUOTE="also what temp is that GPU hitting?[/QUOTE]
Ran fur mark for 2 minutes 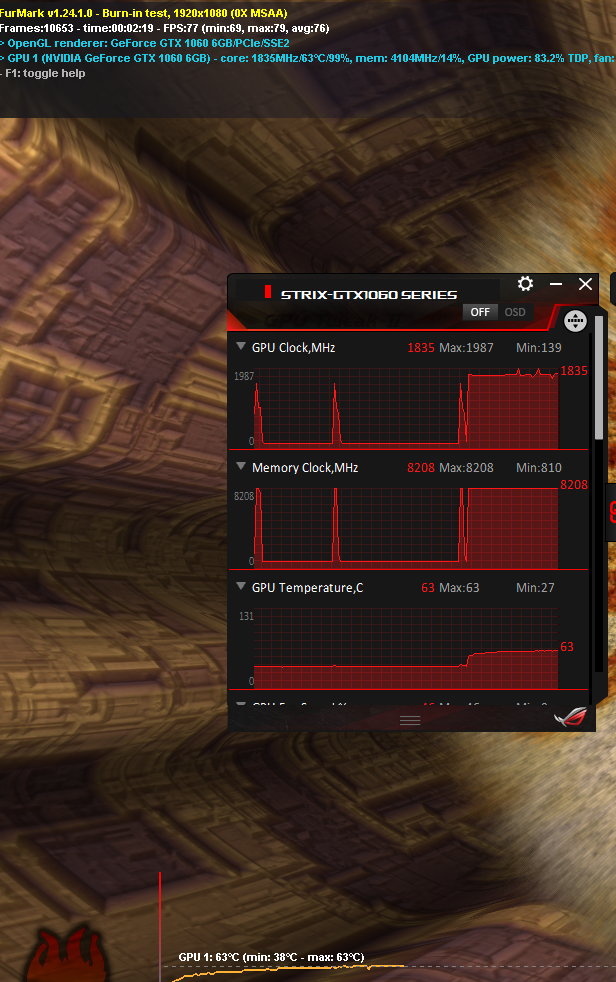 That looks fine. Now do the 3D mark in loop see if there are any issues with artefacts .

Did you run 3D mark on a loop for a few loops?