The master of the white PCB GPU has for a long time been KFA2 / Galax.

In my eyes historically this manufacturer in the HOF line of products not only have the best white PCB cards but also regularly the best GPU of any board partner period.

When I was asked to pull a card from our stock to review I jumped at the chance to see if there 1080 was a worthy addition to the HOF line. On unboxing the card it looks truly stunning. It has a very substantial 3 fan cooler which is 3 slot sized. This 1080 HOF can be used in a maximum of two way SLI configuration. The card comes with a full length back plate adding to the slick look of the product as well as ensuring no flexing of the PCB. This PCB is huge offering twice the Power phases to GPU than the standard 1080 Founders Edition in its 10+1 phase design.

Here are some pics of this gorgeous looking offering in my test rig. 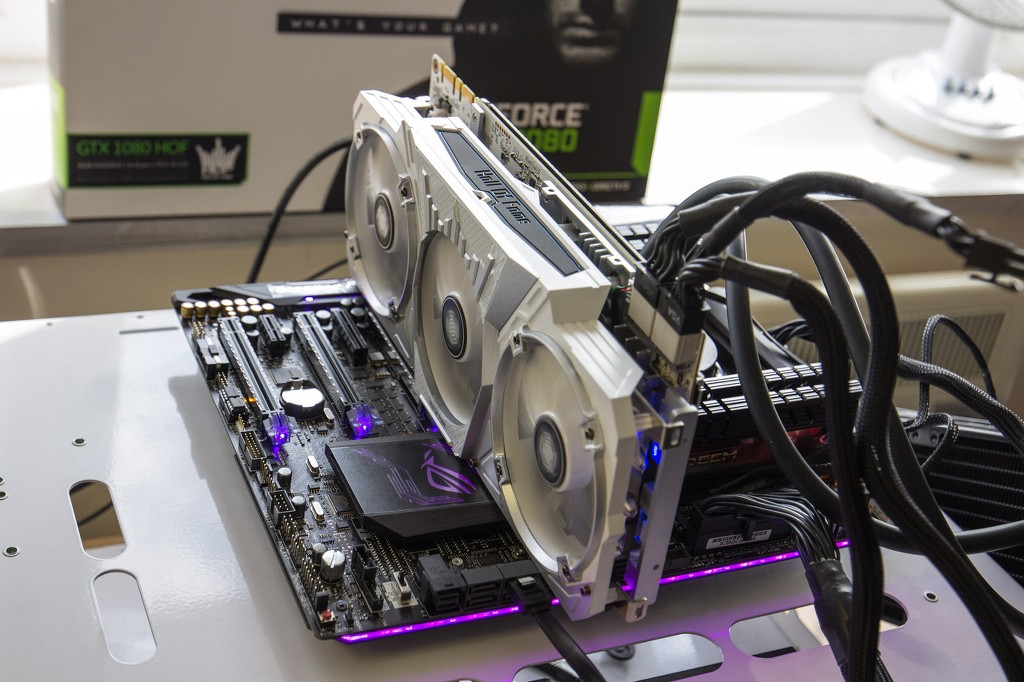 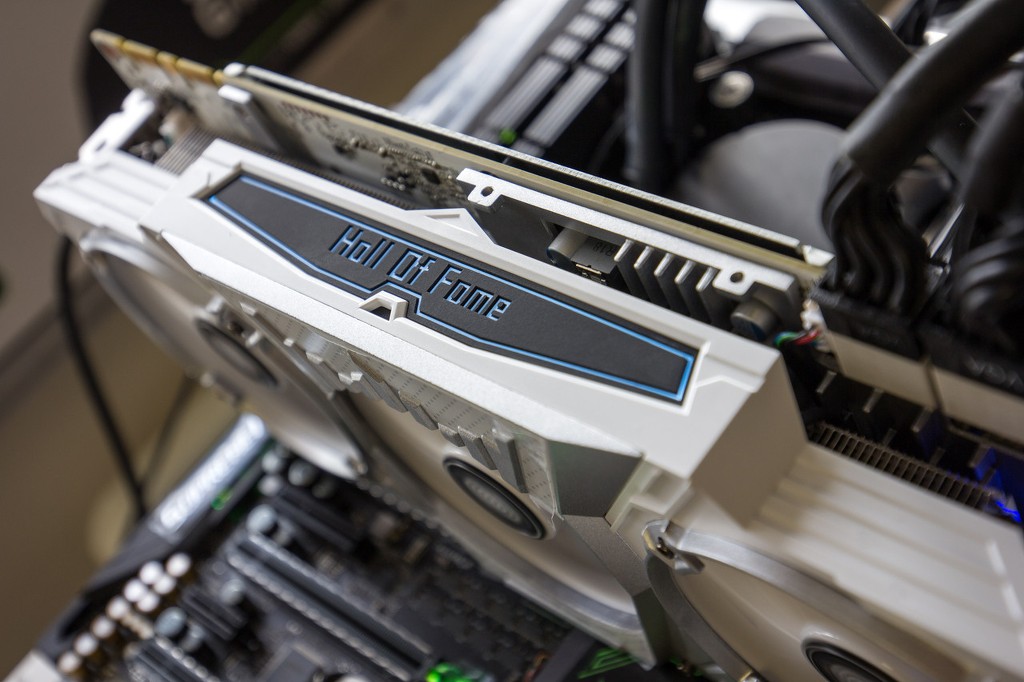 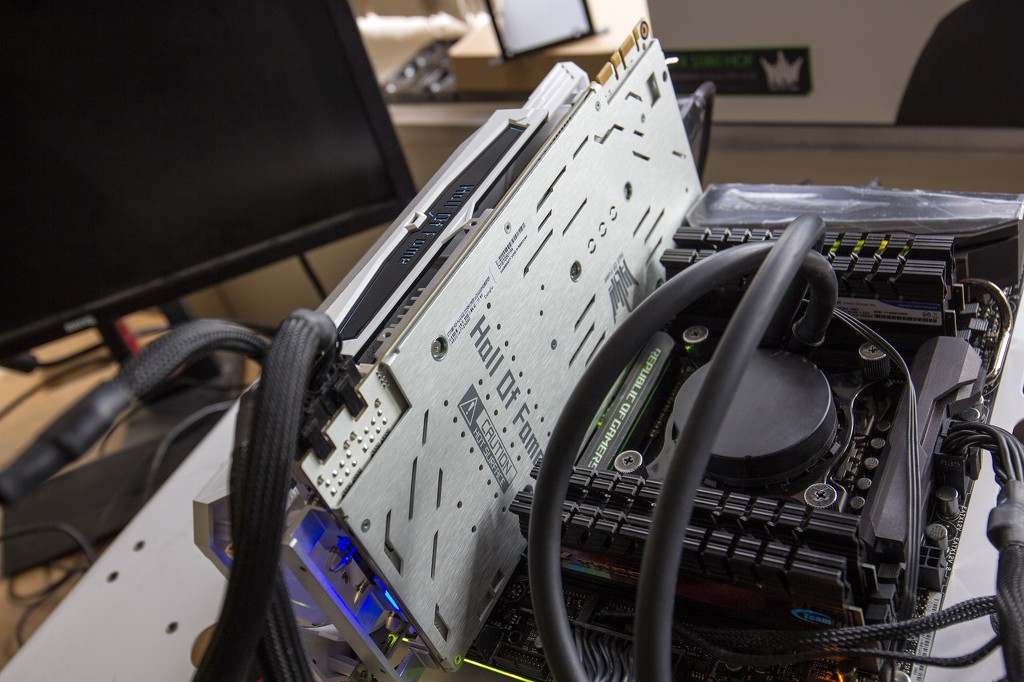 We have established from the pics above this card looks great and the general feel of the product is quality. So lets see how it performs in my standard X99 review system. 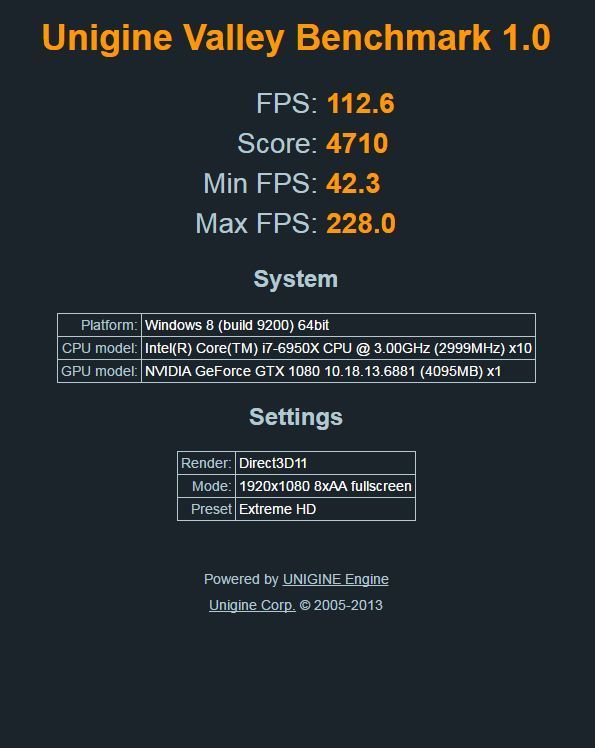 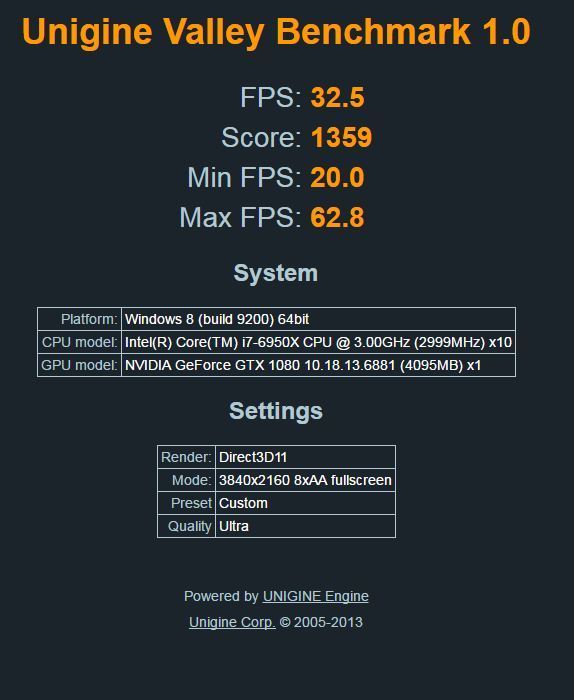 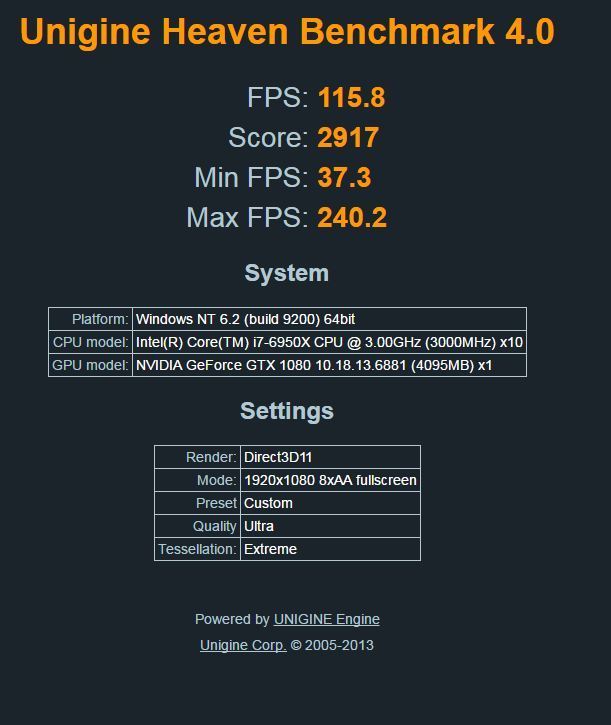 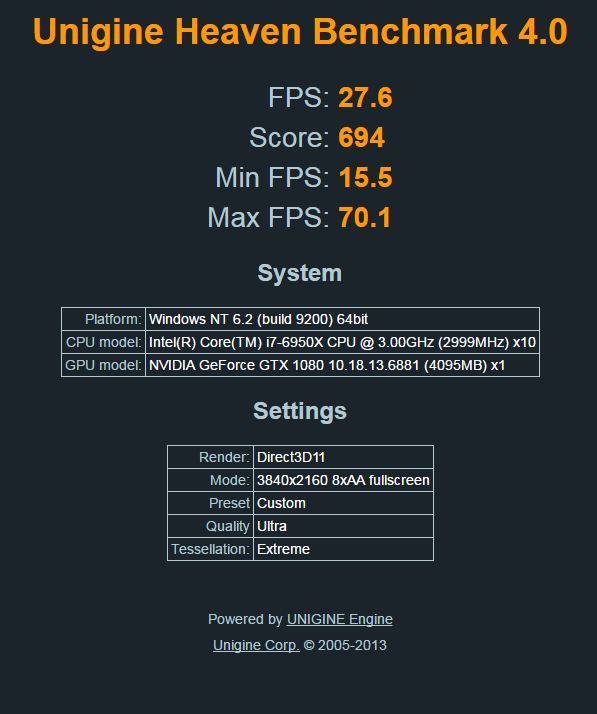 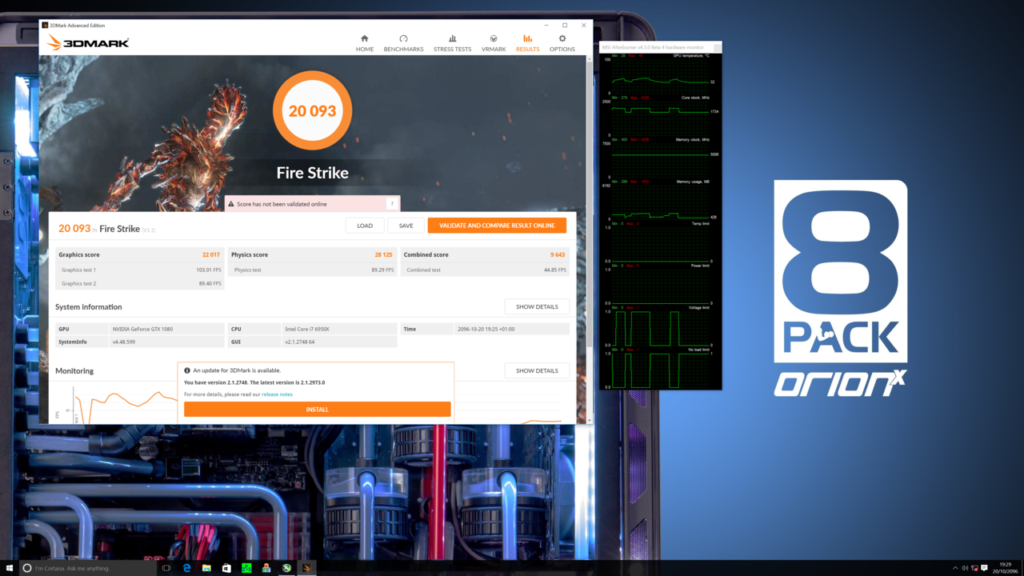 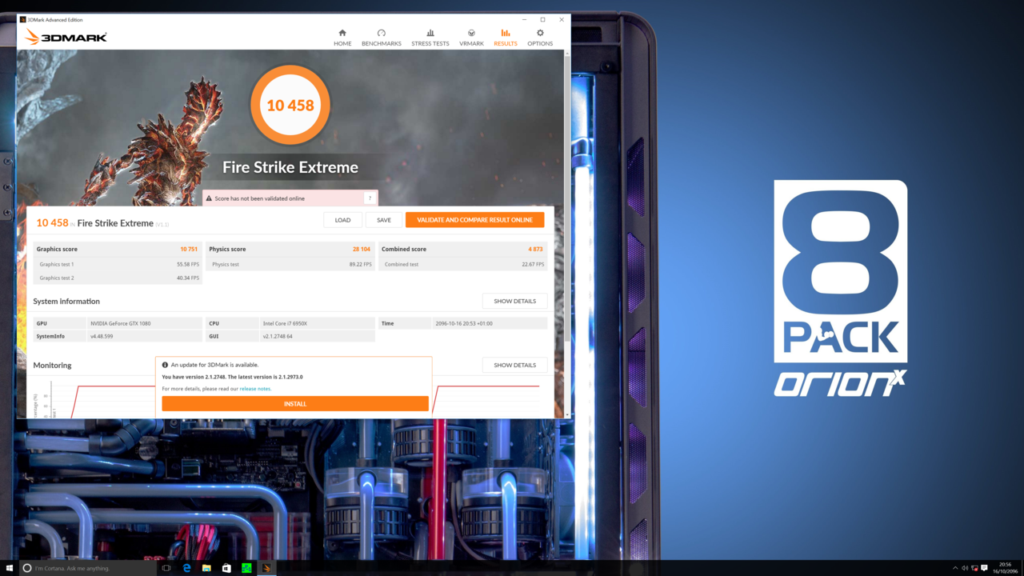 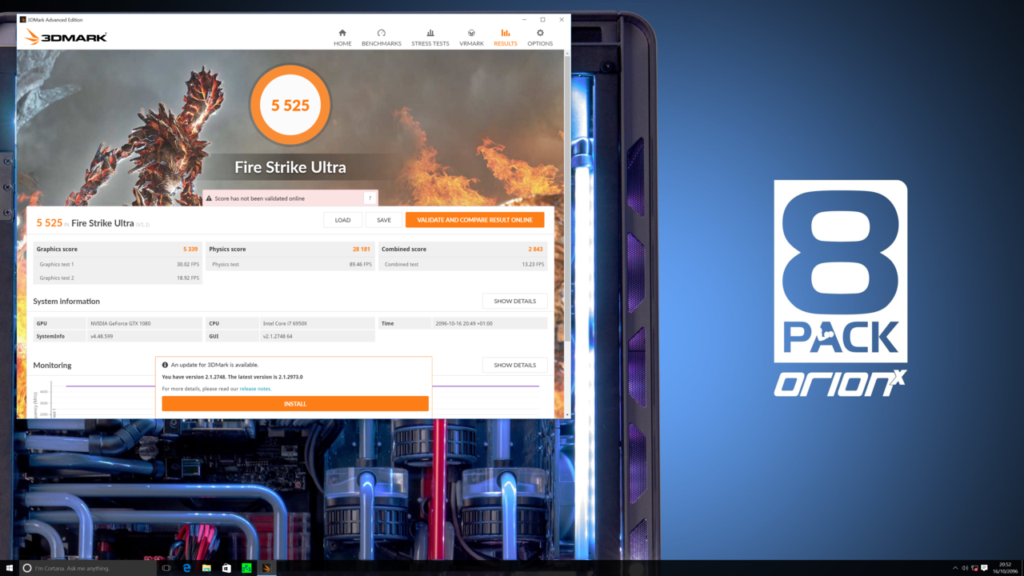 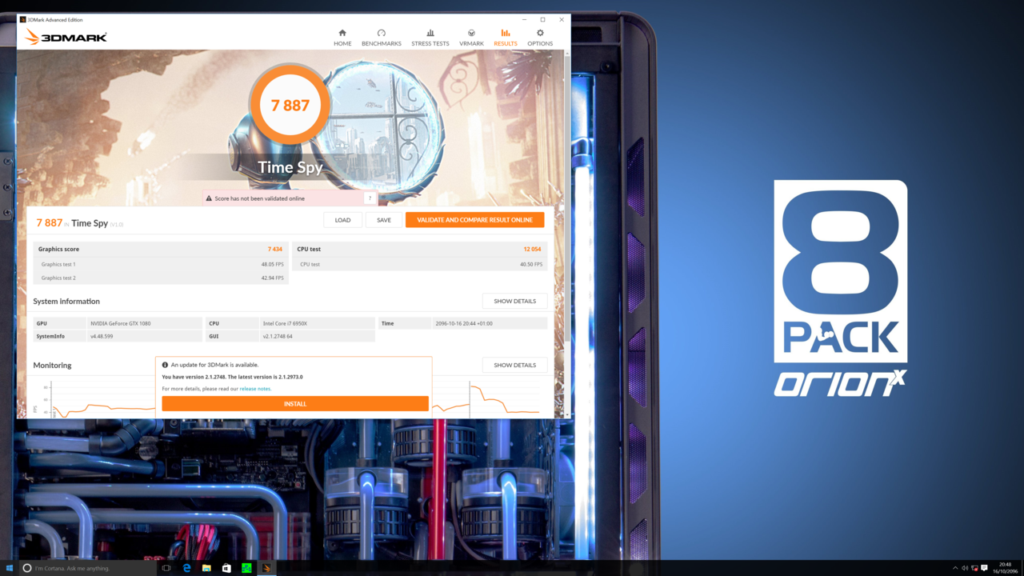 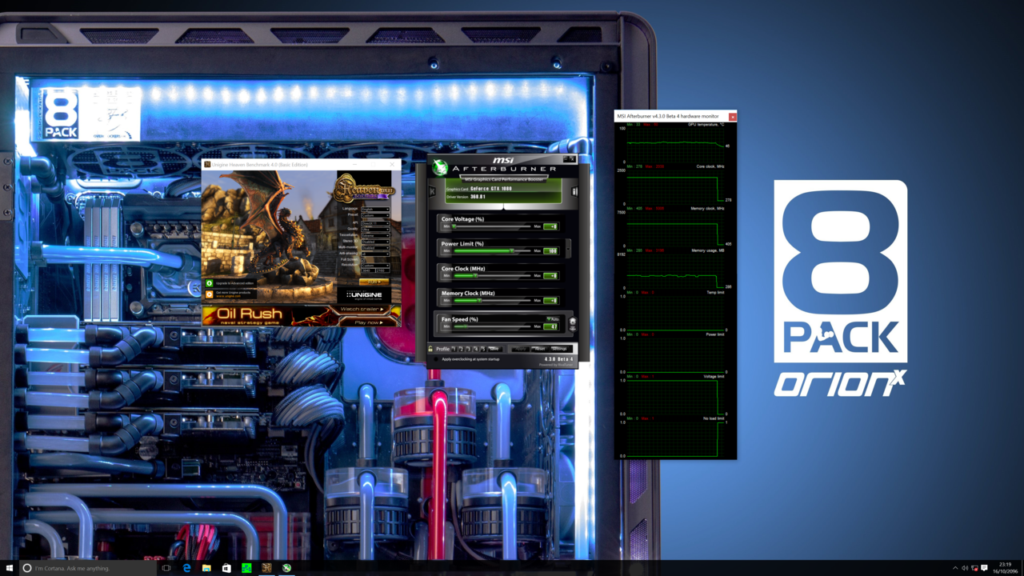 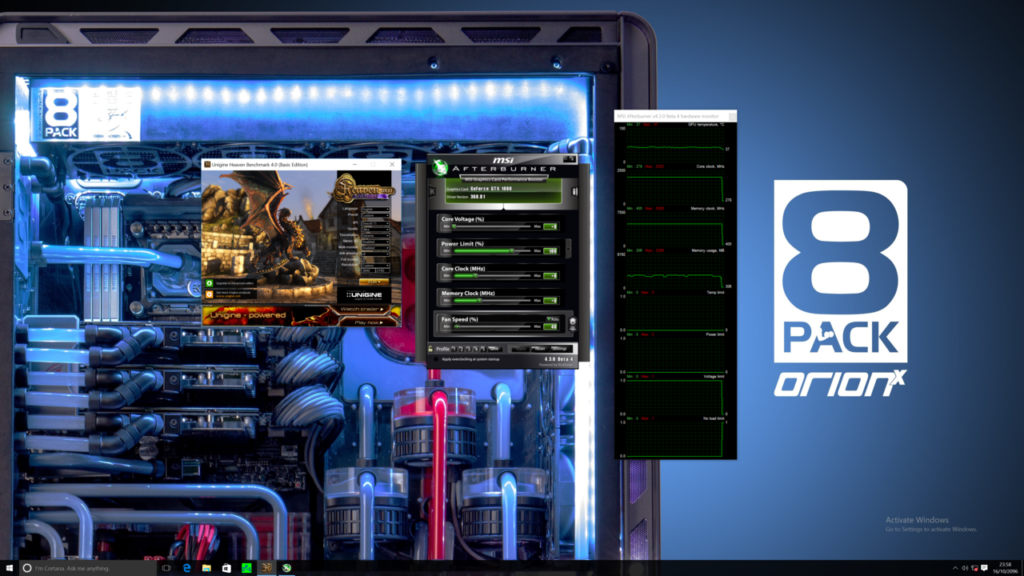 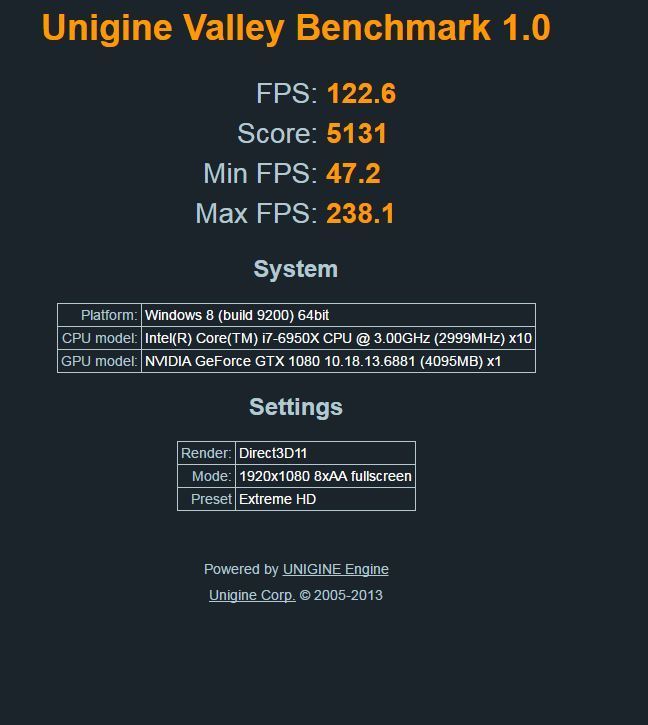 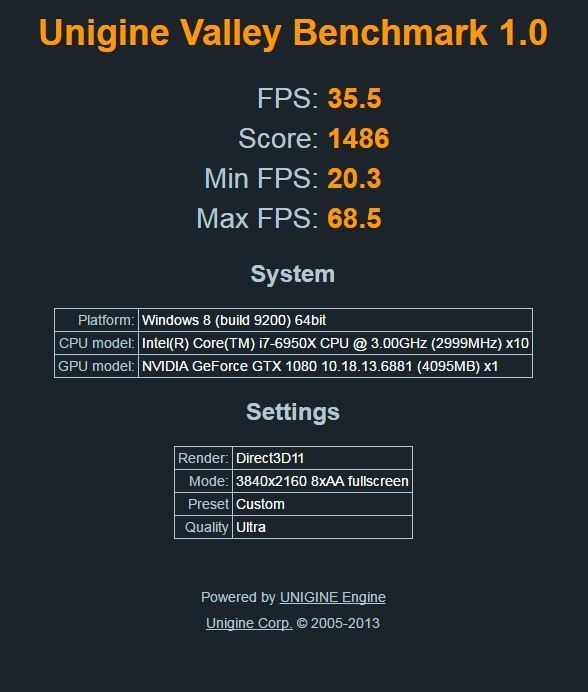 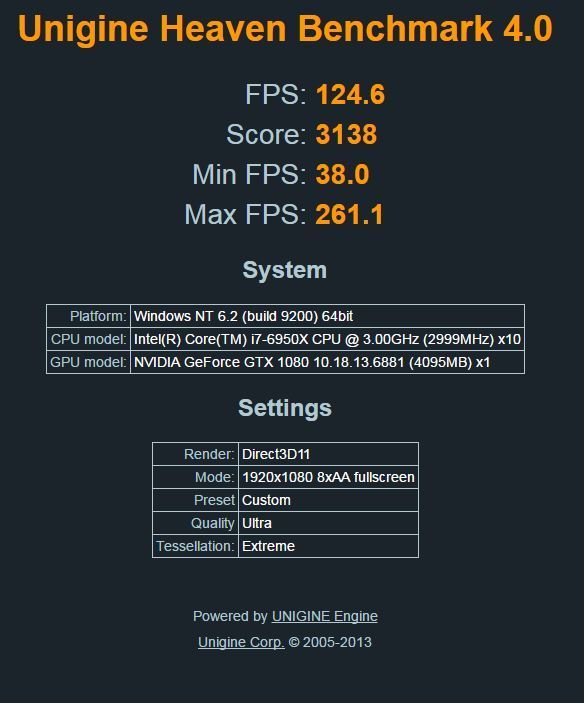 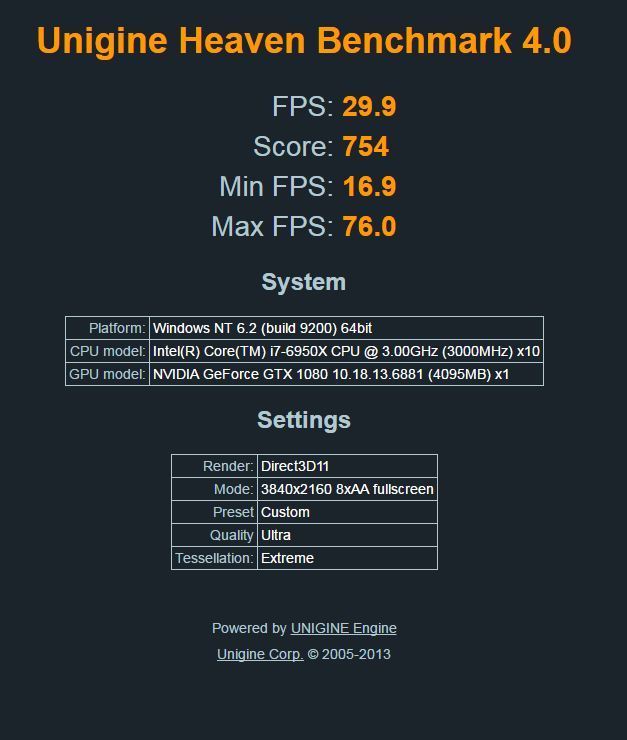 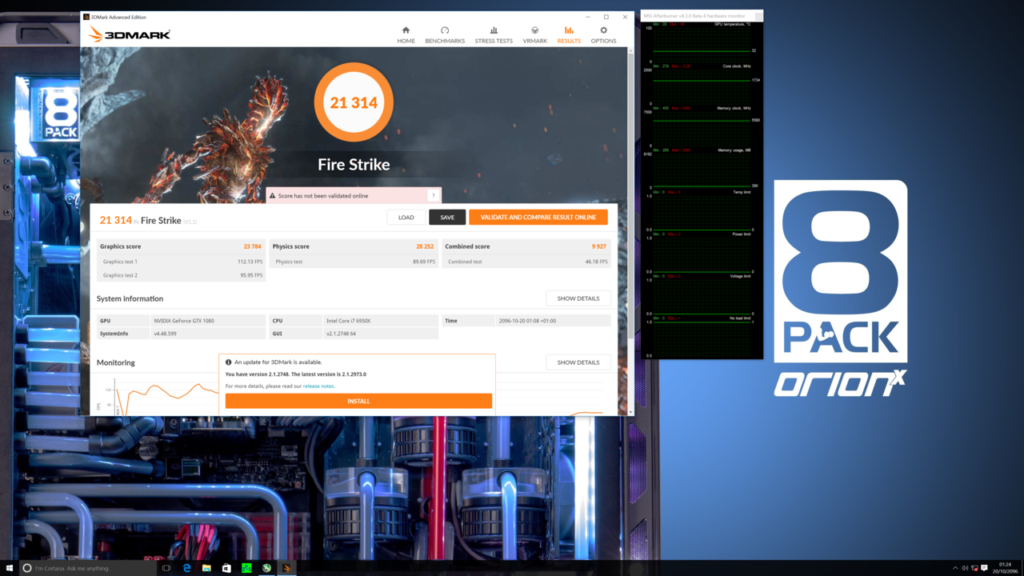 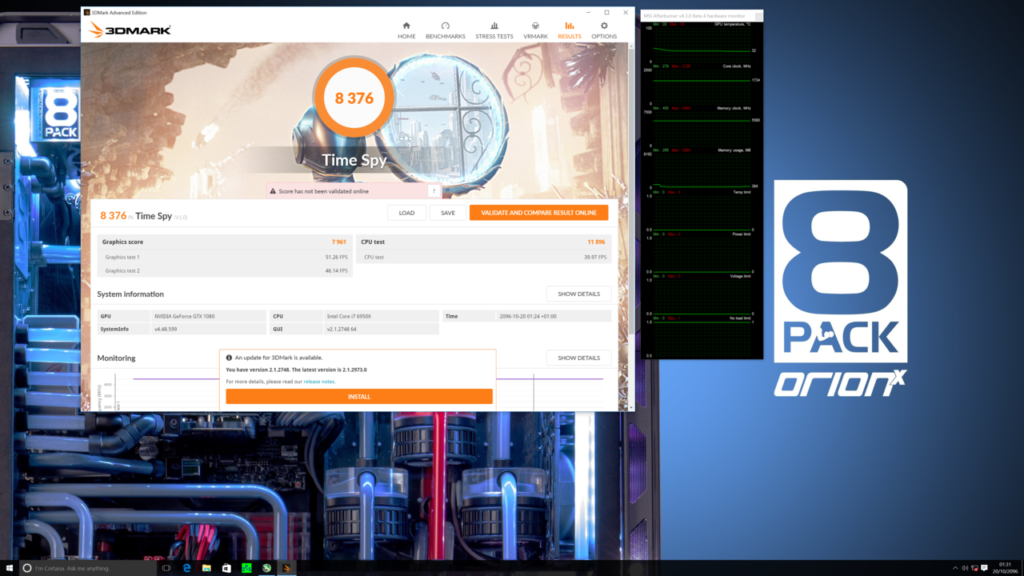 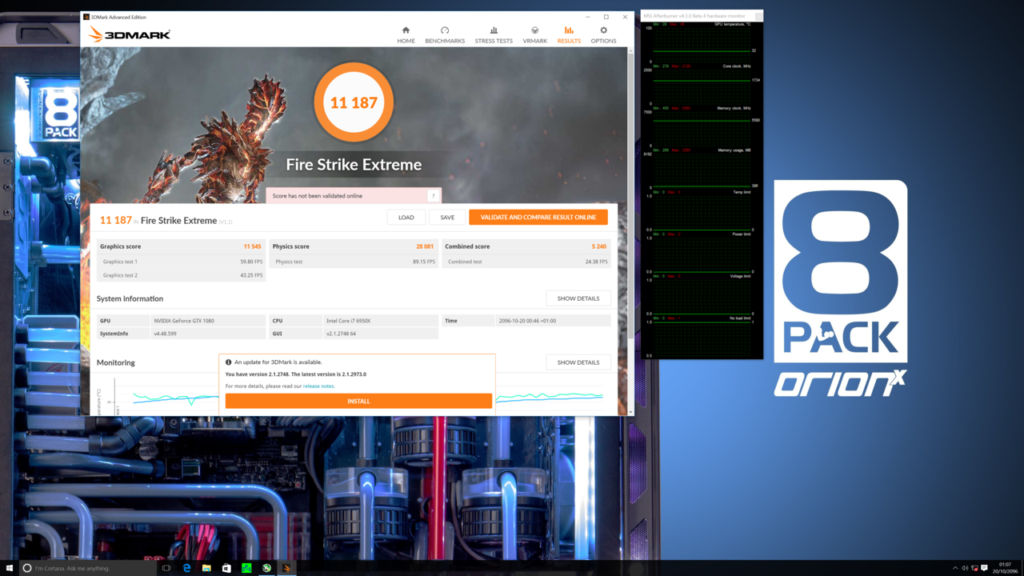 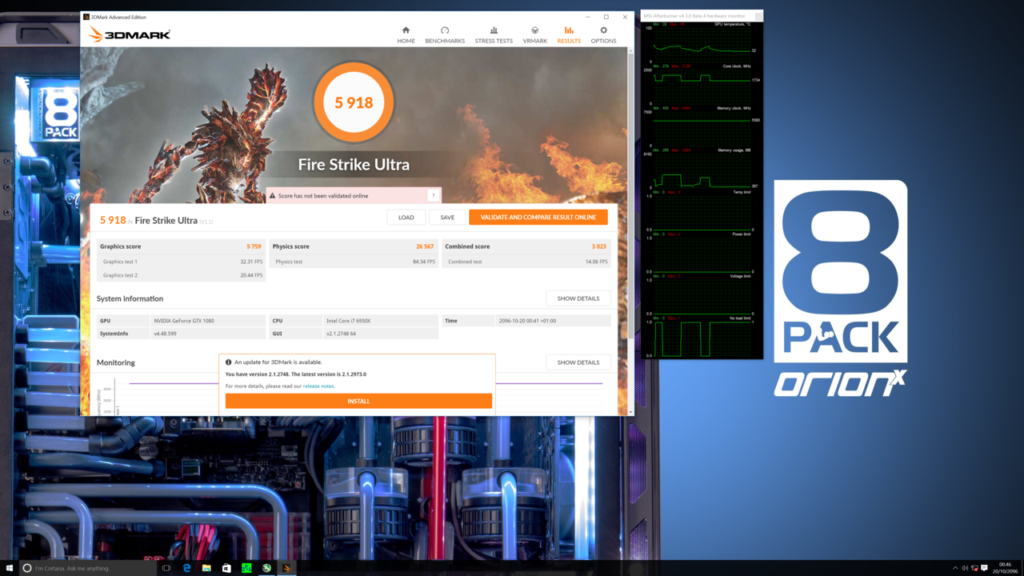 Firstly looking at stock figures the HOF is producing some very impressive numbers in testing. The stock boost GPU clock is 2038mhz which is as high as I have seen of any Pascal GPU straight out of the box beating the previous best ASUS Strix OC by 13mhz. Needless to say at these clock speeds it also beat every card I tried before in pure out of the box performance across all the benchmarks. For those not wanting to OC this is the best card period.

Now lets check the performance of that huge cooler. To do this I ran Heaven at 4K res with all the details including tessellation maxed out for one hour and monitored the temps. With the fan profile at auto which was very quiet indeed and certainly inaudible over the AIO cooler fans on the CPU the peak temp of the GPU was 60C. At this temp the frequency of the GPU remained locked at its full boost speed of 2038mhz. A very impressive result. Even better thermal performance resulted in pressing the boost button on the IO. This is for benching only really as the fan noise is much greater but temps are now even more impressive. After my one hour heaven run they now peaked at a crazy low 47C which is in water cooling territory!!! In summary the cooler is looking great but cooling even better.

The 1080 HOF Overclocked to a very solid 2138mhz Core and 5580mhz mems. This produced a healthy gain in the bench marks. The HOF reached these numbers with no voltage tweaking, no power limit changes and no fan profile adjustments. What I found impressive was not only these great benching scores but the fact that the boost clock was completely stable so no power limit adjusting frequency during bench runs or games. With this performance was consistent without any kind of custom bios or tweaking. I also found that these clocks where 100% game stable when I tried several games over numerous sessions. So not just bench stable clocks but game stable too which you very rarely find on any GPU.

In short I would highly recommend the KFA2 / Galax 1080 HOF. It looks amazing, is built to the highest standard with solid PCB design and power delivery. The cooler is quiet and very effective. Finally and most importantly the performance out of the box was the best of any 1080 I have seen and the overclocked performance of a random sample also very good too with zero tweaking needed to ensure no power limiting or clock fluctuations under load. This adds extra performance to your games while not adding any noise. The HOF is a truly a class leading 1080.

Very impressive stock speeds and to maintain over 2.1GHz when overclocked with no voltage, power limit or custom fan profiles makes it even more impressive.

You should try to push 2.2+ with some tweaking and then get it under some LN2.

Nice review for what looks like a nice card

Firstly looking at stock figures the HOF is producing some very impressive numbers in testing. The stock boost GPU clock is 1038mhz
Click to expand...

I presume you meant 2038mhz

Edit: you fixed it already lol

Gibbo said:
Very impressive stock speeds and to maintain over 2.1GHz when overclocked with no voltage, power limit or custom fan profiles makes it even more impressive.

You should try to push 2.2+ with some tweaking and then get it under some LN2.

I will try for sure. I wanted to see initially what kind of results every end user can attain with minimum tweaking at low noise.

Those temperatures are insane. NVidia did a phenomenal job keeping these new chips efficient for the AIB partners.

Look forward to your LN2 Testing on this card 8 Pack

Yeah for sure I will try at some stage.

Why is that thing so expensive?? I'd get it if it coped with 4k. The introduction of 4k basically makes almost all cards overpriced as they will not be able to cope with the "highest quality settings" any more. The game has changed.... Prices need to drop drastically

It's priced according to performance and cooling. It's the best performing 1080 in every way. Plus looks great which is justifying the price.

any idea if galax / kfa2 will make an black 8Pack 1080 Hof themed card? because a black card fits way better in my build with my Asus Rampage V Edition Ten board

I can't ever talk about unreleased product. That board has RGB and is neutral in colour so it can easy be done.

I've never been a big fan of white cards but seeing that has changed my mind. Looks amazing, thanks for the review, great stuff.

Nice performance, however i like black pcb, shroud more.

Look is personal taste. This card can fit in with many systems even with white PCB.

The performance is top drawer. I am going to do a water cooled build with this card very soon. Will produce a build log.

Probably too big for my mITX build.

@ 8 Pack thanks for the review on this card

without that I would not have bought as KFA2 are only 2 years warranty instead of the usual 3.

Its exactly as you say stunning piece of GPU

got mine yesterday from OCUK. Only mild negative I can add is the optional FlexHold supporting stick bracket is a tight fit into any mid ATX case you really need a full ATX case for it as it adds around 2" to the internal width of the GPU. I can see why they included it for free the card is very heavy & sturdy

That heatsink & triple fan design also keeps temps very low I am struggling to reach 70C gaming hard @ 4K. If you do not want to go water or AIO this is by far the best single PCI-E slot GPU I have no doubt it could get close to the £1100 Titan X in the right hands of an experienced Overclocker Good to see our customers getting great results too.