I made a post the other week asking for a bit of help choosing, & ended up with the following items: 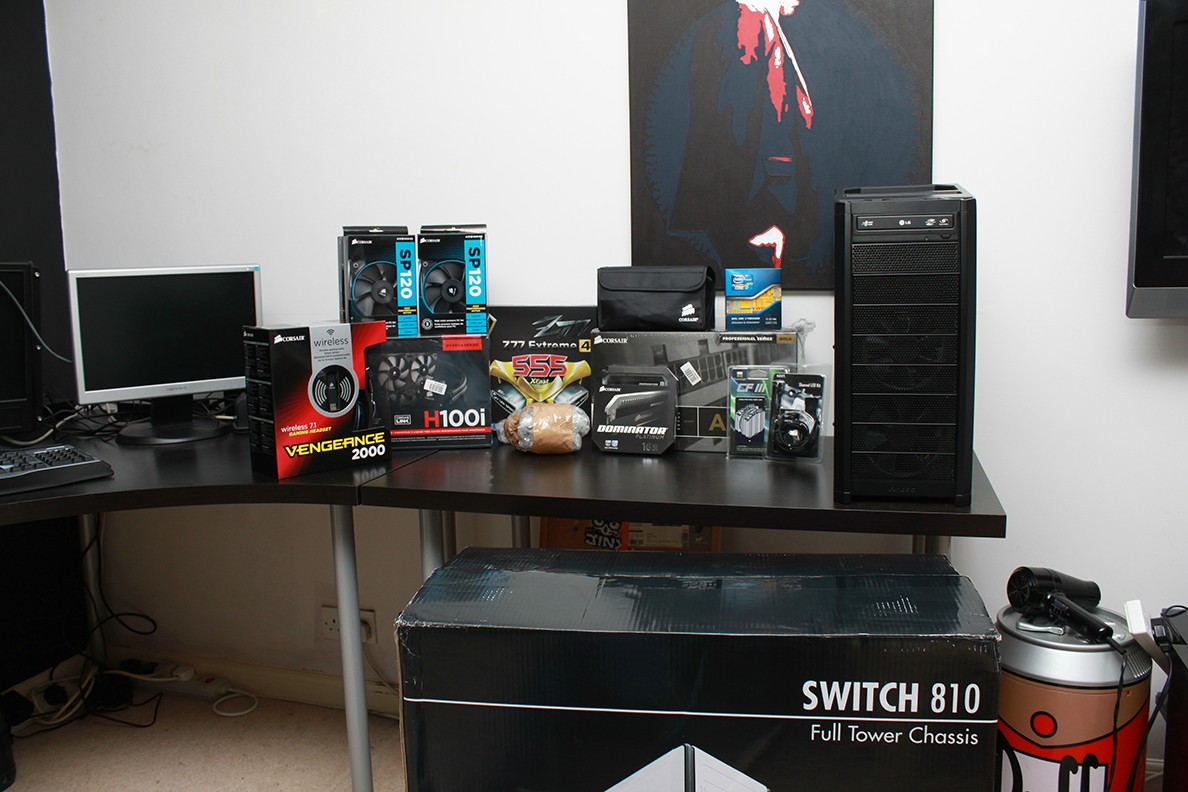 I spent a good 2 hours unboxing everything, it was like Chistmas. However, I didn't even get chance to photograph the Haribo thanks to the girlfriend. 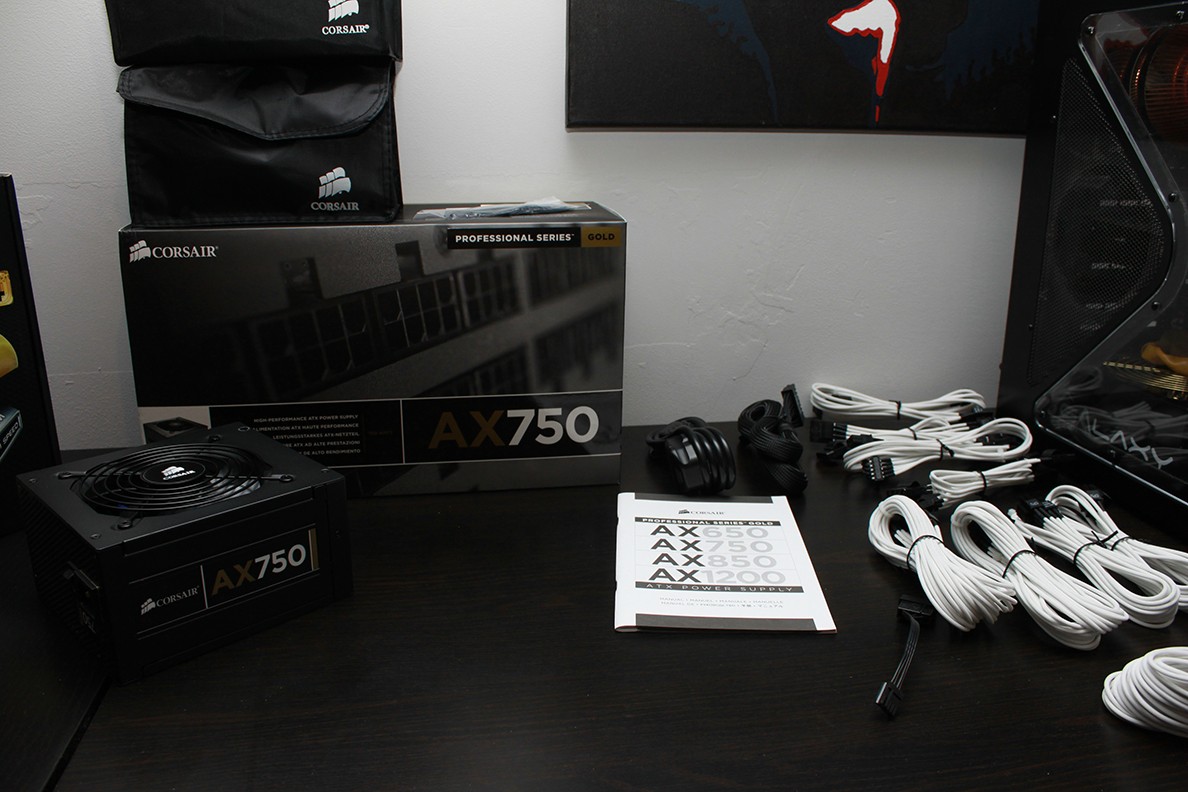 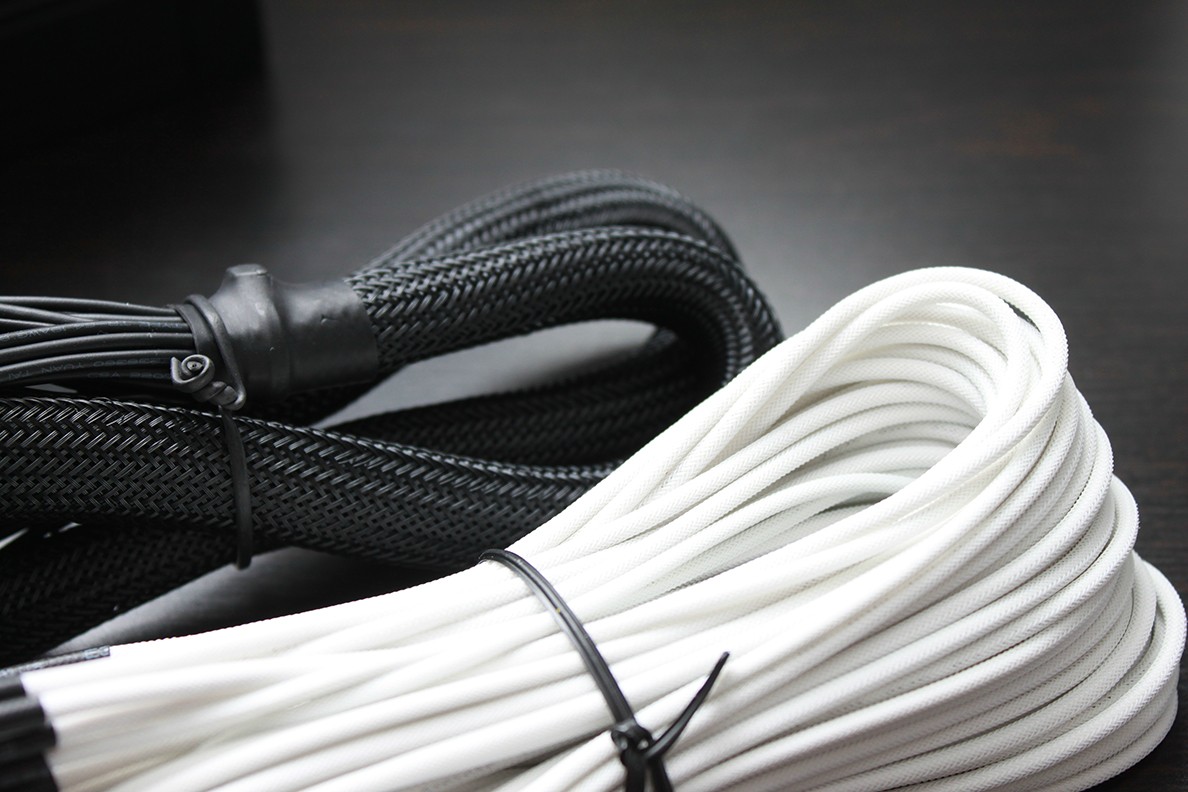 The white Corsair cables which are by far my favorite part of the build. 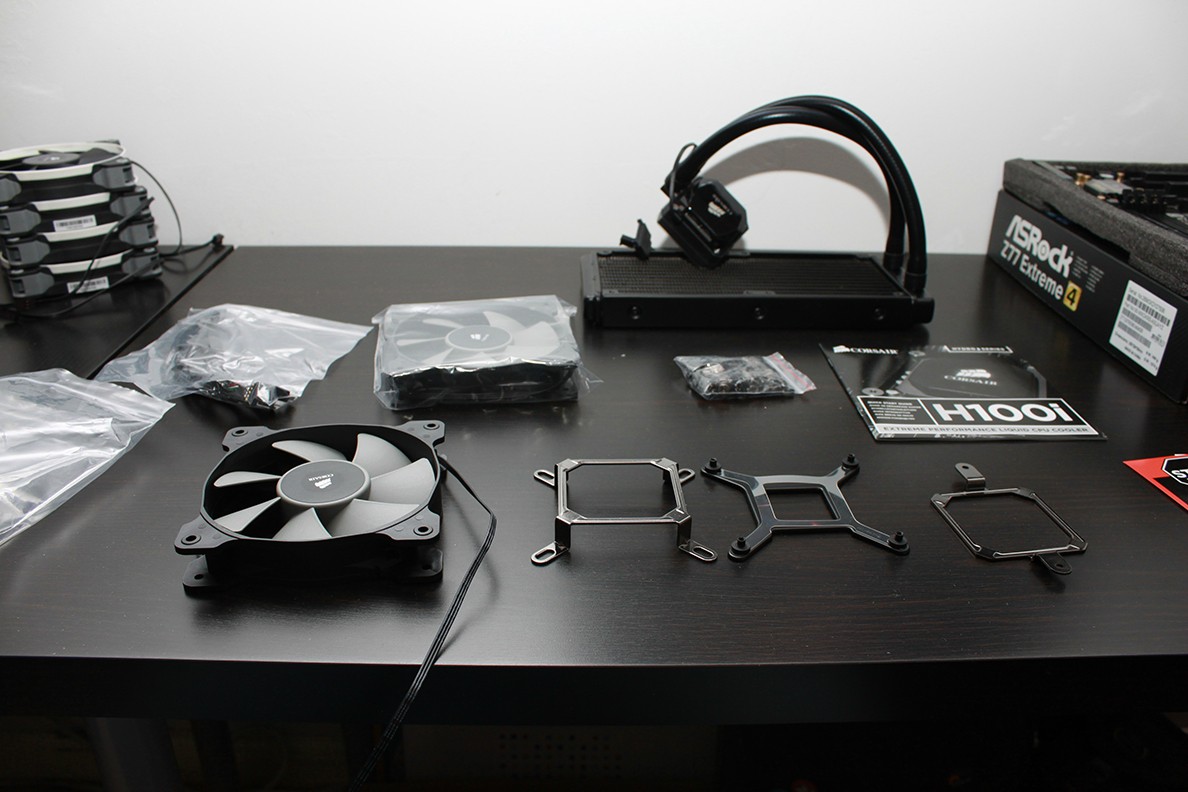 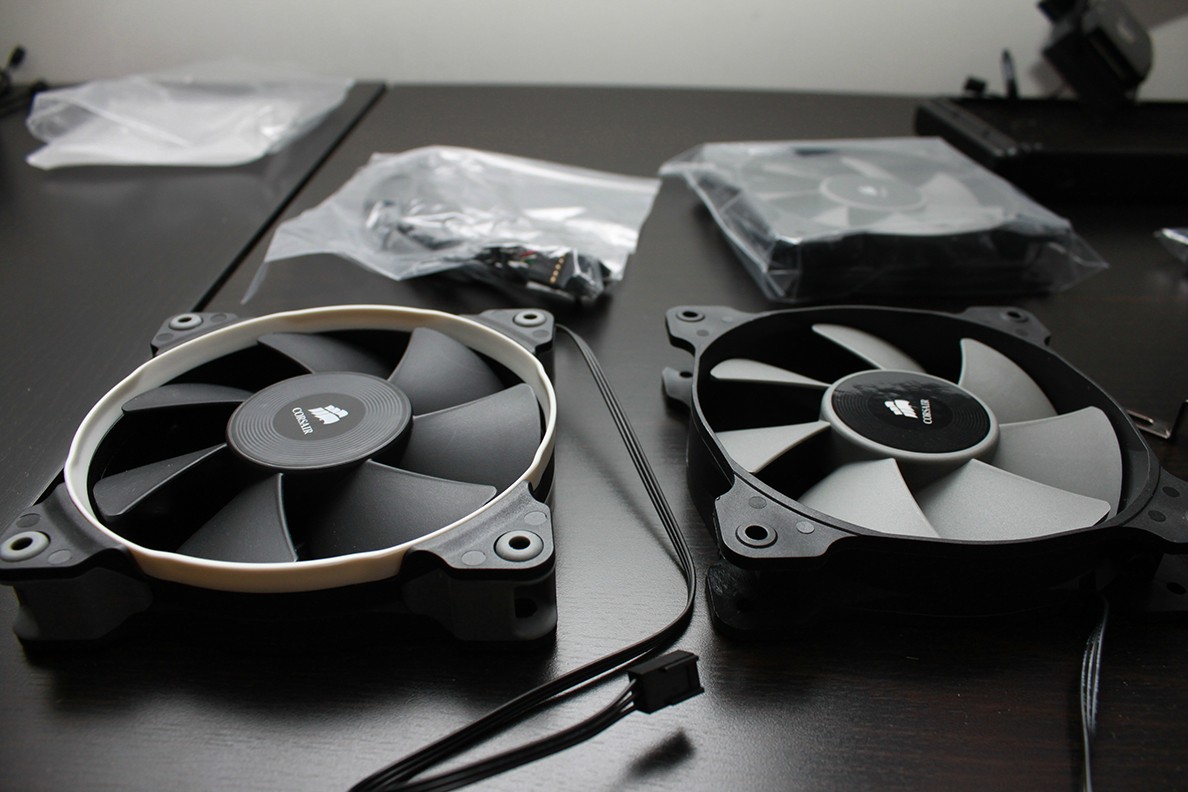 The H100i along with a comparison of the new fans versus the SP120's. They don't seem too dissimilar, although the H100i ones were a lot harder to spin by hand & the build of them is completely different. 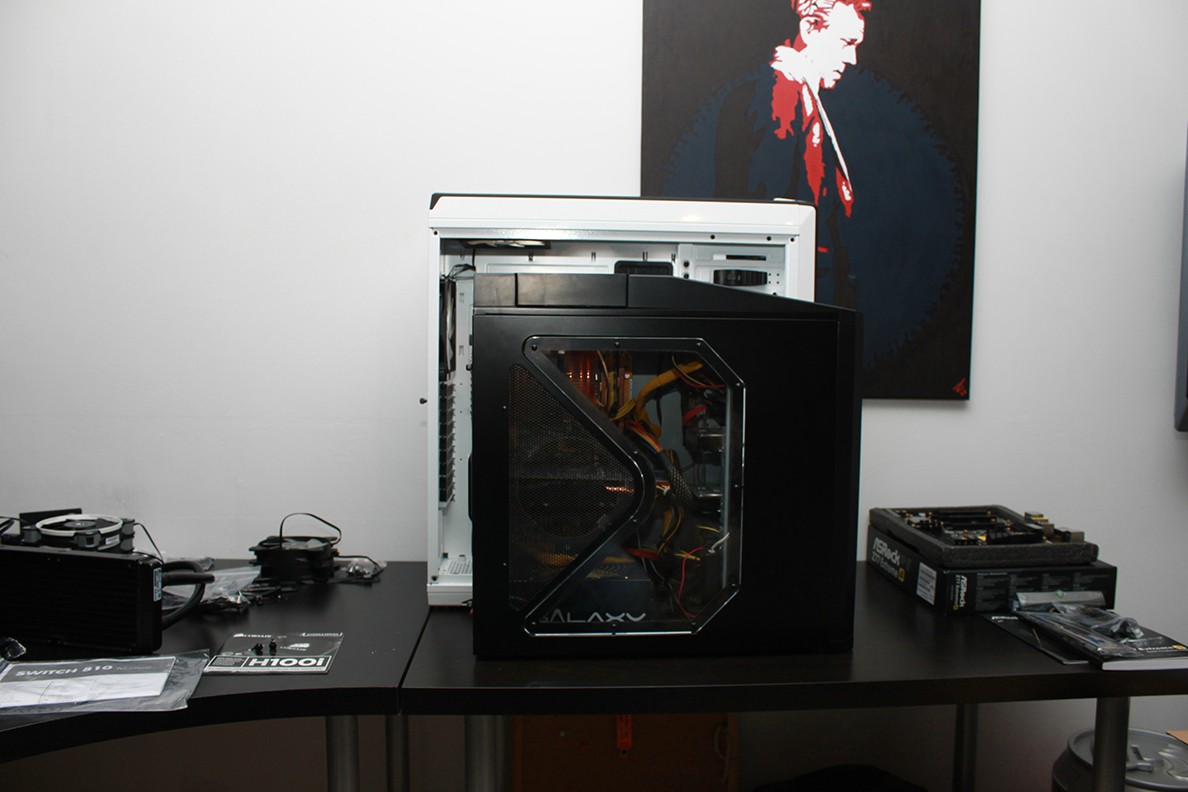 Comparing the NZXT to my old Antec 900. I never really realized how much of a difference there is. I love the Switch, it was so amazing to work with. I cleaned out the Antec last week in preparation for the new build & it was such a nightmare to work inside or get any form of cable management going. The Switch was like a dream, however the top panel came covered in what I assume was some kind of wash from the molding process or something. Took quite a while to get it off in all the nooks & crannies. 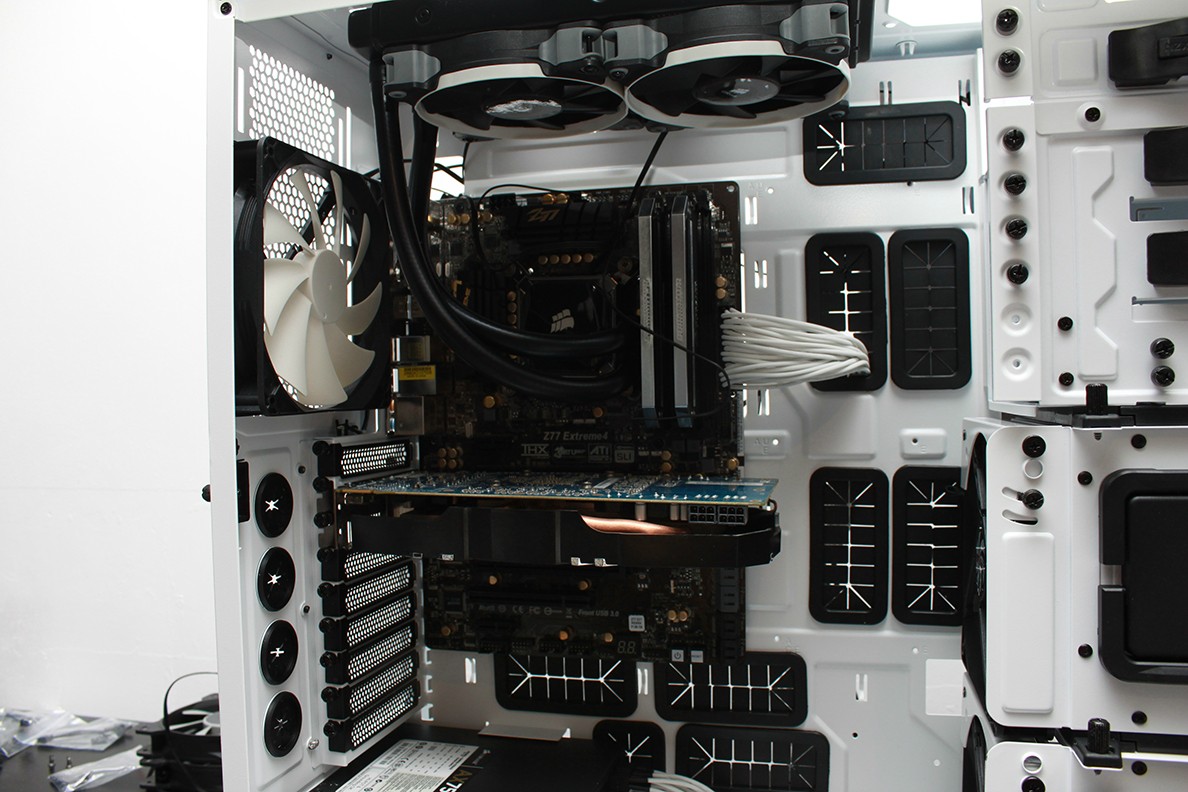 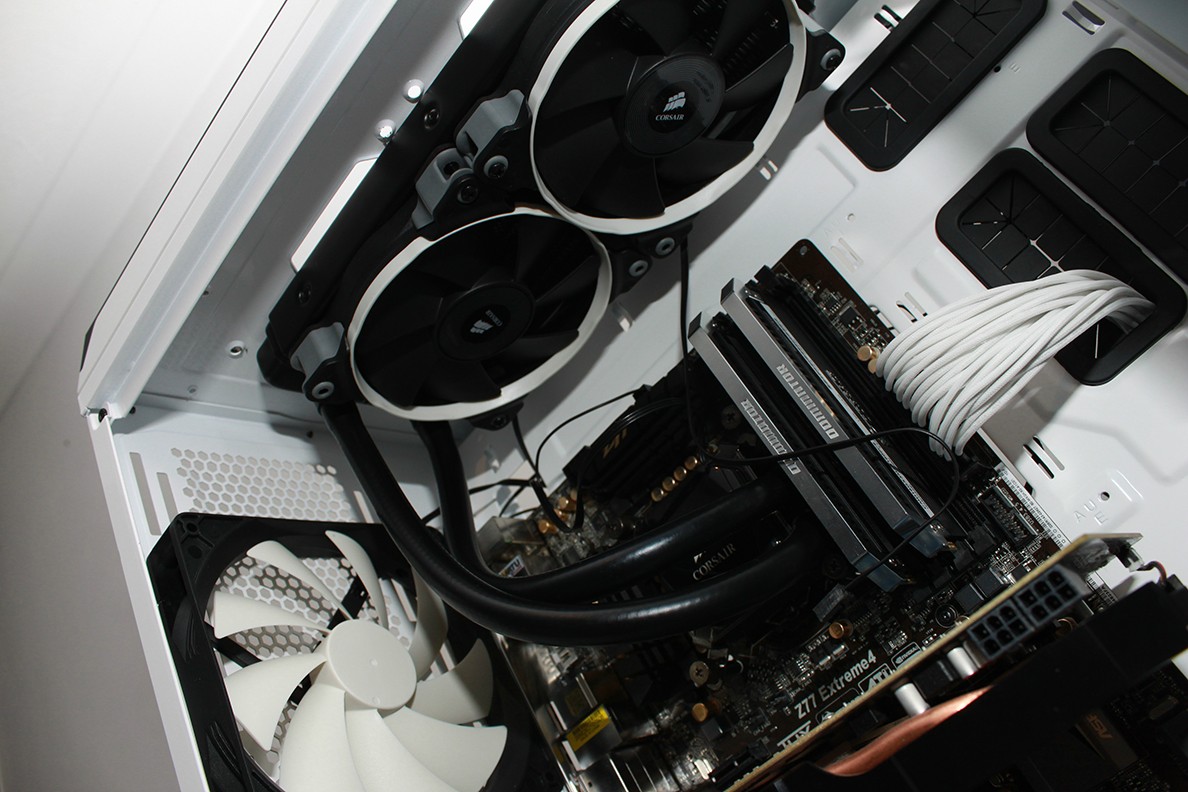 Test the rig & shoved it in easily. I was dreading fitting a mobo for some reason, I always heard horror stories about people shorting them & its always been the main put off of building my own PC. 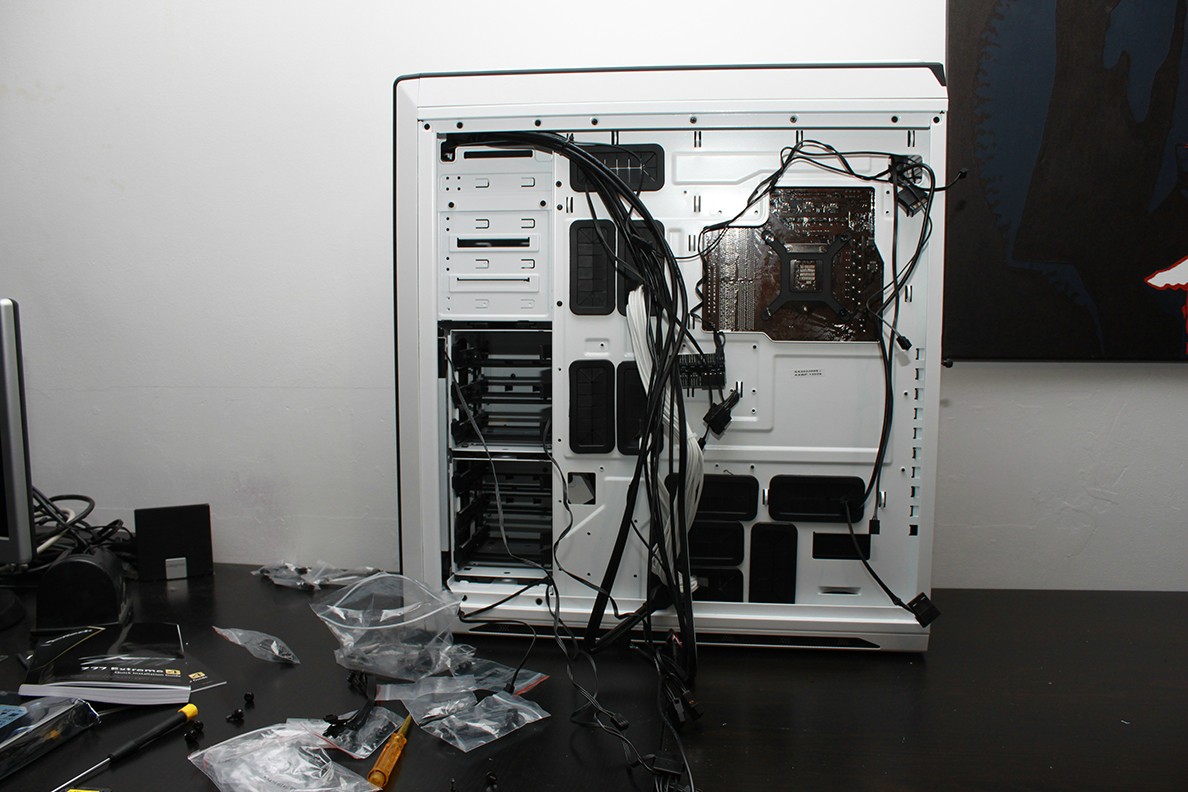 This mess, which isn't even half the cables took me a good 3-4 hours to sort. It's not perfect by any stretch yet, but I can at least get the door on now. 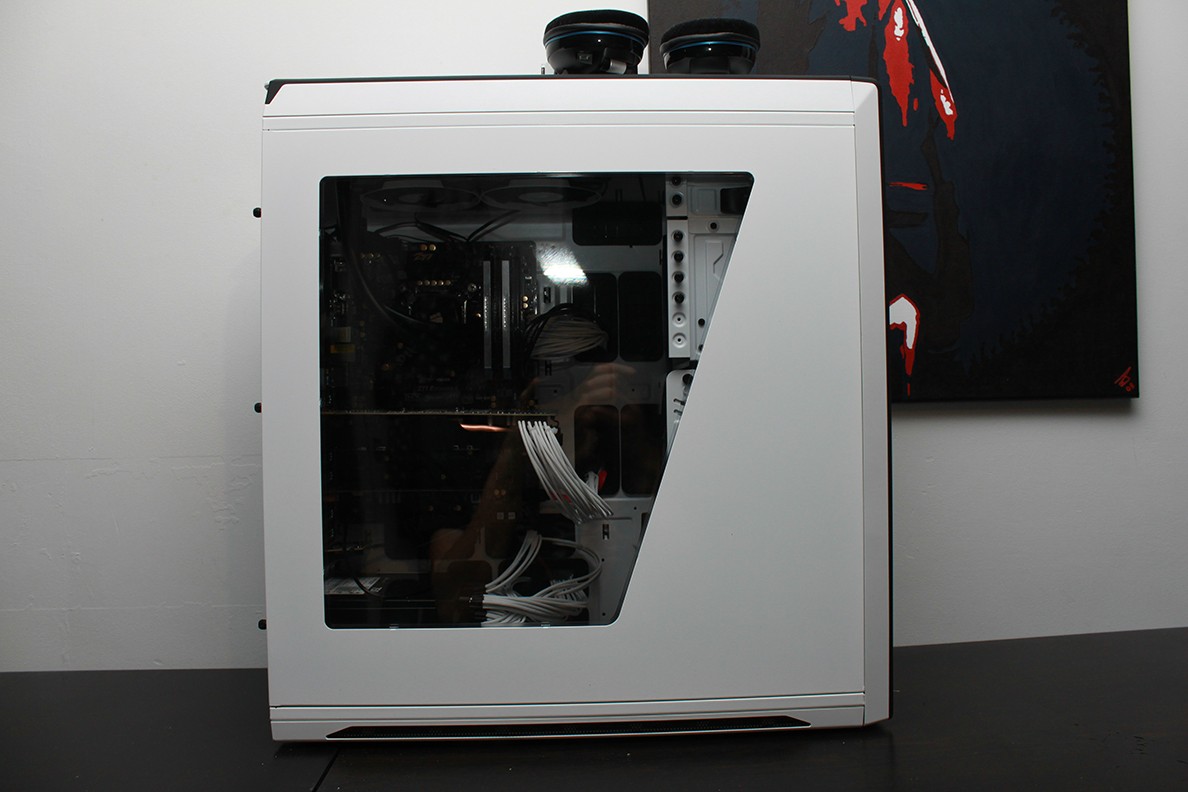 This was it finished at 10 last night, I had a load of troubles getting it running. Mostly due to me not plugging the PCI, CPU & HDD power cables back in to the PSU. I wasted a good hour fooling around in the bios wondering what the hell was wrong until the girlfriend asked why those cables down there weren't plugged in. -_-

I'll get round to uploading some more photos later, I couldn't be arsed trying to get the flash gun working in a white case last night.

Anyway, for a first build I'm really glad I made the choices to go modular & get a massive case. Things like that just made everything so simple. As for now I'm really happy with everything from the service OC provided down to the final build. I'm looking to upgrade the graphics card in the next 2 months or so, & maybe put a 360 rad kit in instead of the H100i. It's not that the H100i is a bad cooler, it's doing really well at the moment, but the stock fans were awfully loud & I badly want to carry on working on this rig & that's where I see my plans going. Other than that I can't but praise all of the components, especially the Corsair ones. Everything I had from Corsair just screams quality & I'm going to recommend the hell out of them.

Album of extra photos can be found here: http://imgur.com/a/A4JNJ

Noticed you had some LED's in your basket. Any chance of a pic with them on wanna see how bright and the effect they have on inside of case?

Yeah use Corsairs Mod Psu's myself,

the cables match the case nicely

Are you sure this is your first build? Nice tidy workmanship, and a pretty tidy looking build overall. I love the white colour-scheme.

Finally got round to get some more photos together (More in the imgur album from the first post also), seems OC sent a cold with my order that has slowly been killing me. Really got a bug for building now it seems, keep tinkering with it every day. The cables are a little messy but I'm waiting on the new BitFenix fan controller to come to sort all the fans out.

As for the LEDs they are really make the rig look special at night. I will mention one of them has failed but I'm not bothered for the price. I would mention if you're going to fit them in a case the size of the Switch go for the 2M LED kit, the 1M just doesn't go far enough to show everything off.

On another note, the H100i running push pull with the standard fans & the performance fans is keeping the cpu very cool. I hit a high Sunday of 37 degrees after about 5 hours of Planetside2 on high so thats my benchmark so far. >< 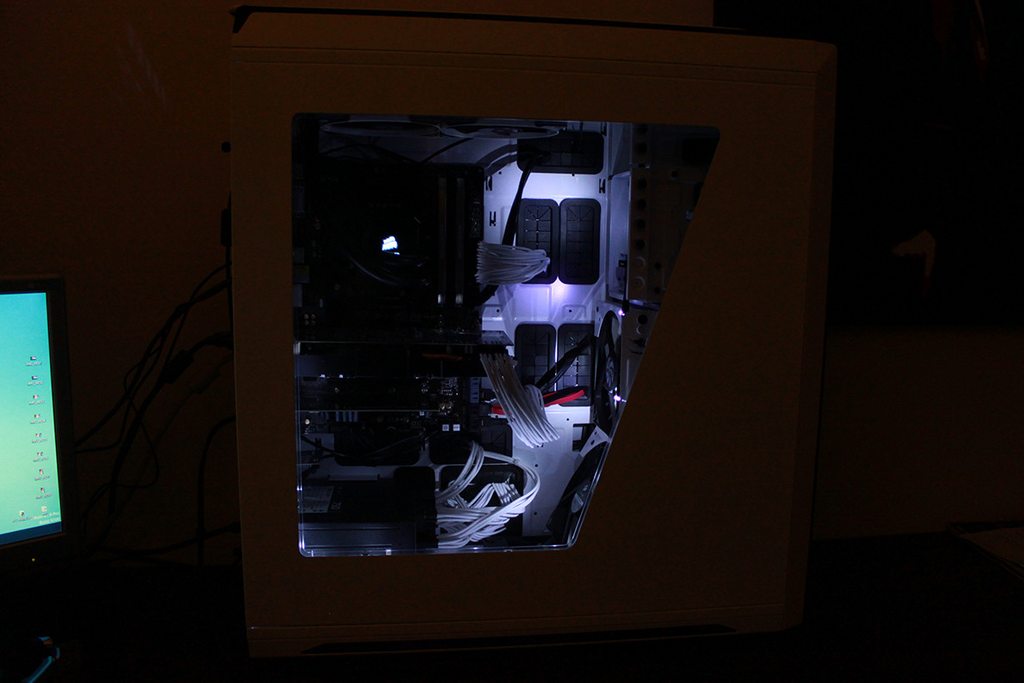 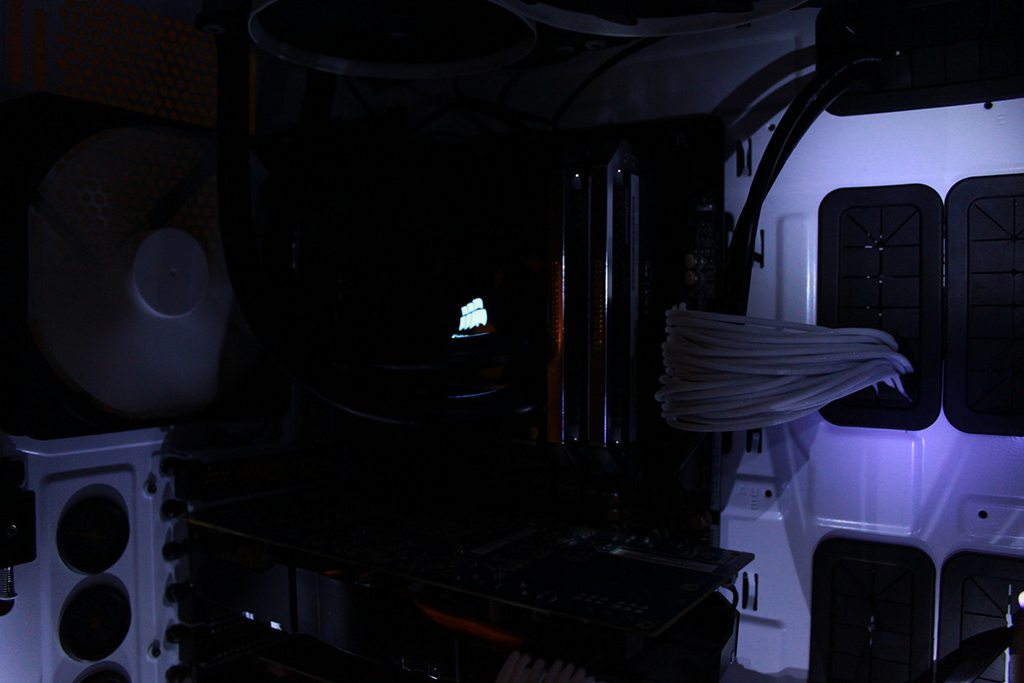 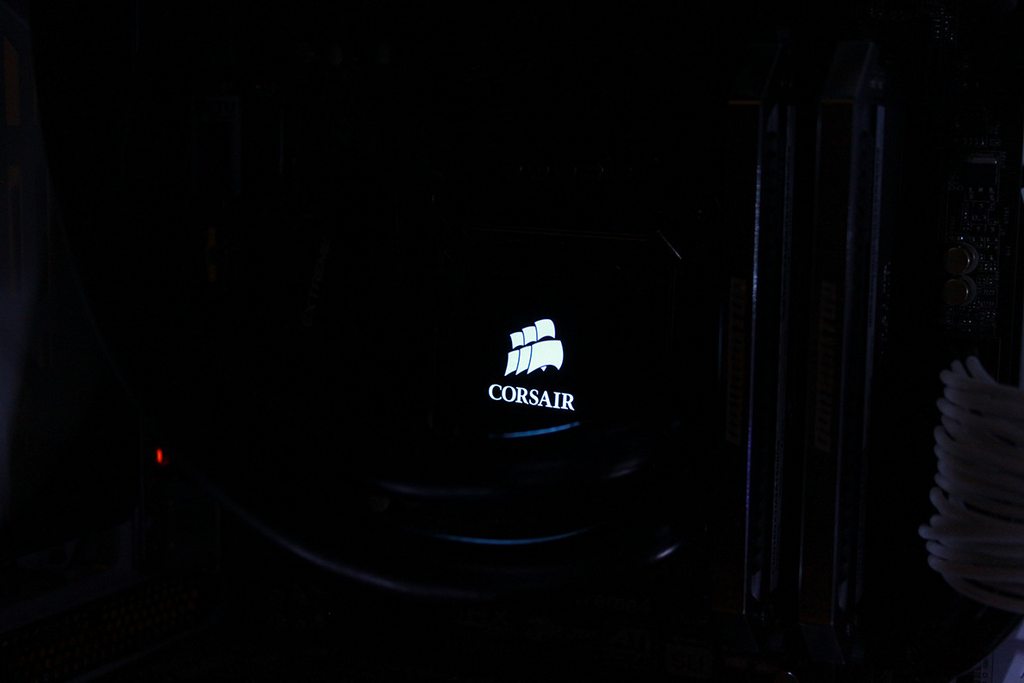 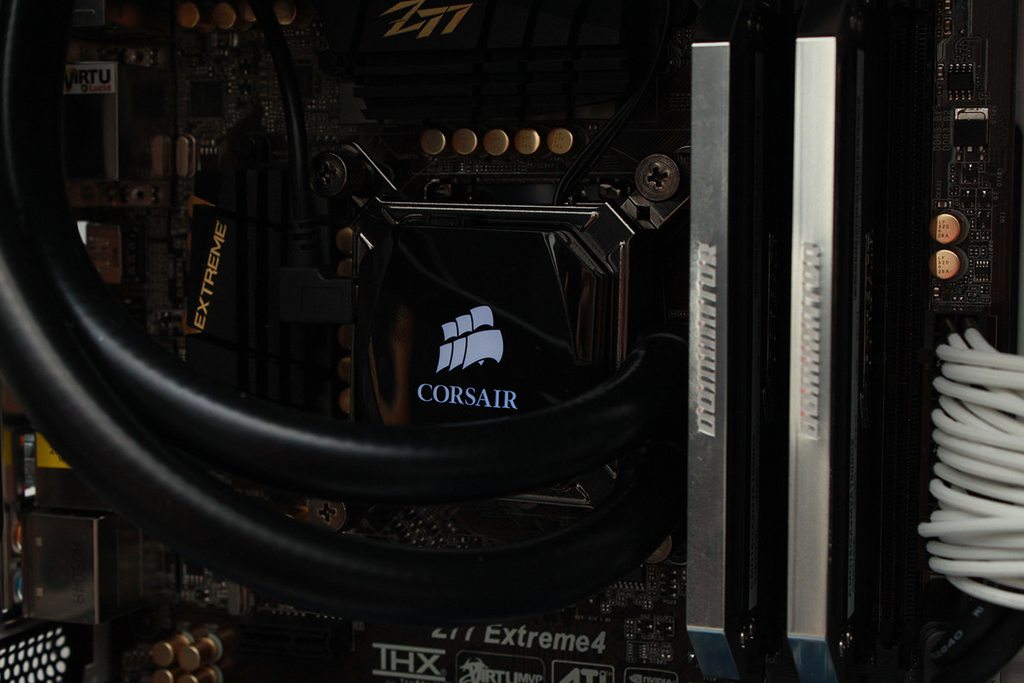 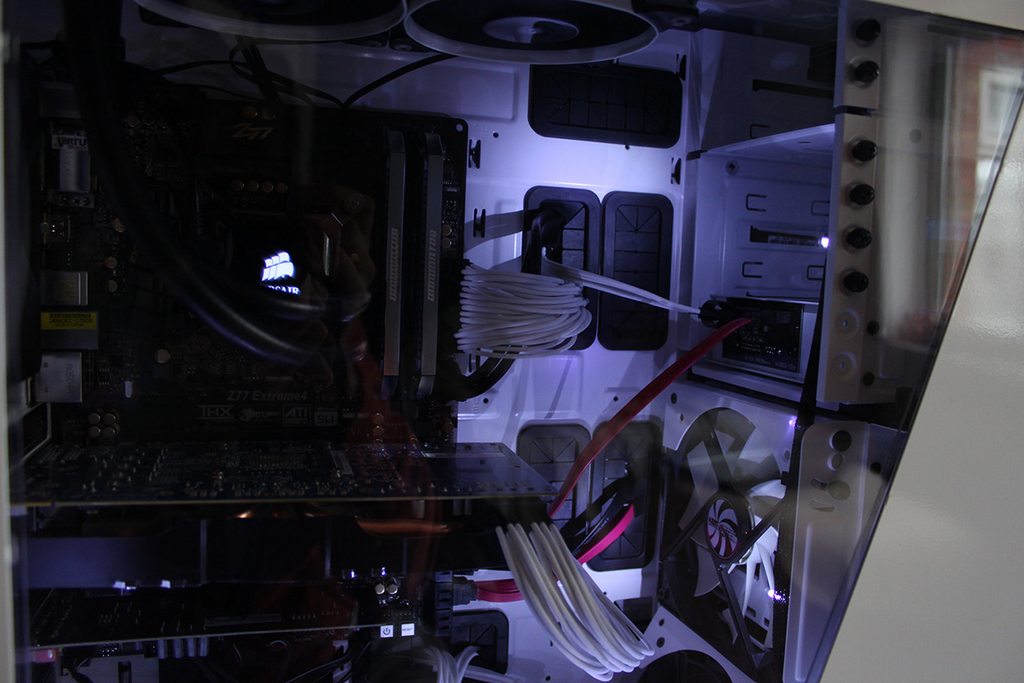 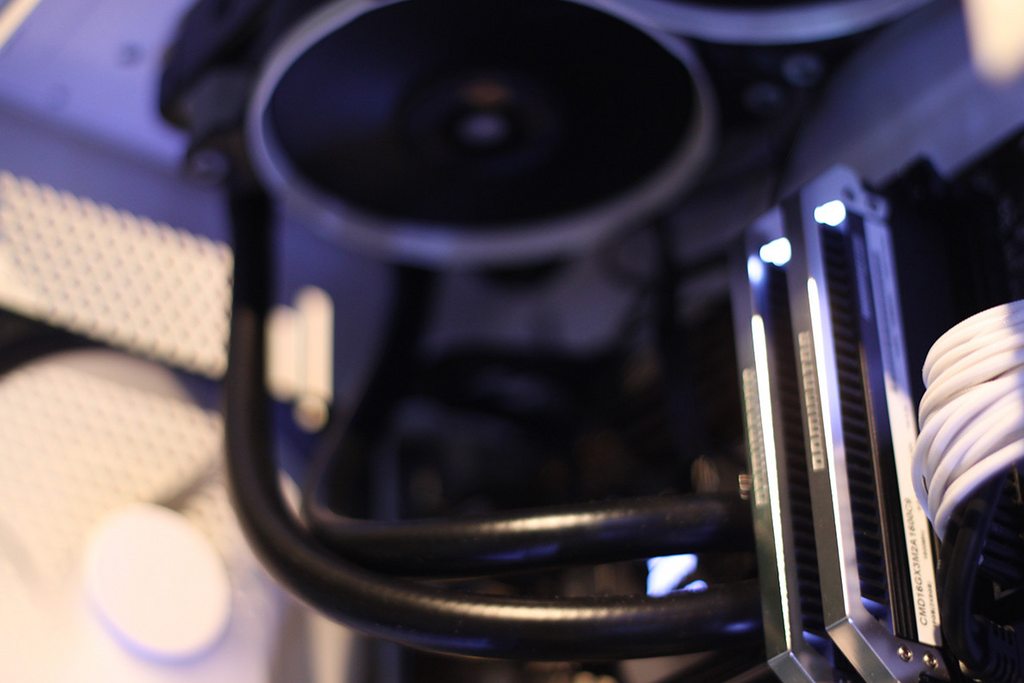 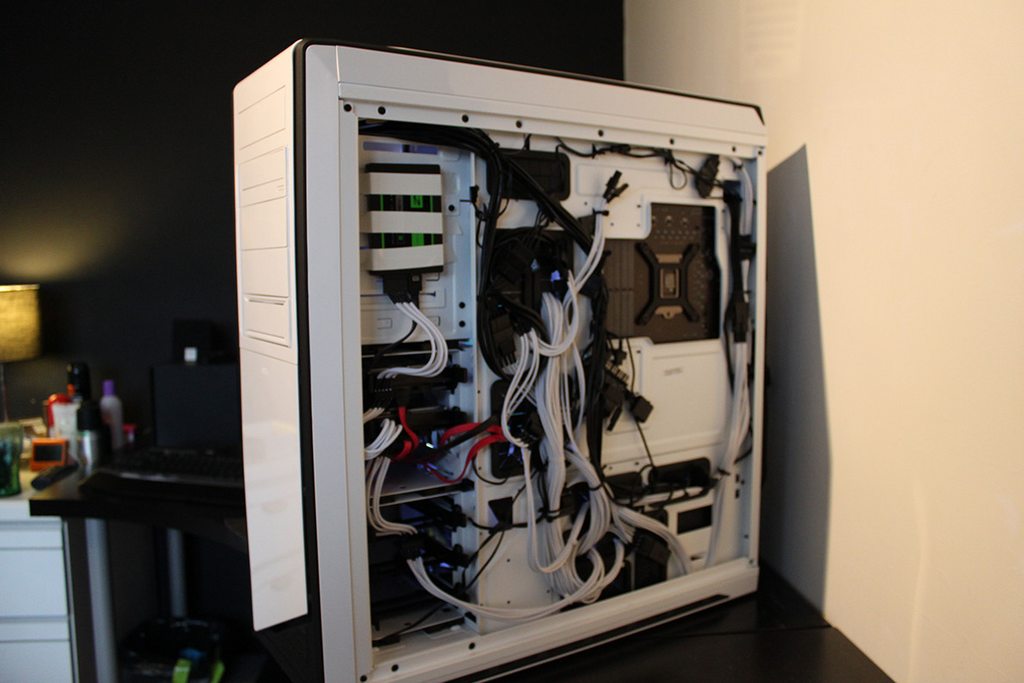 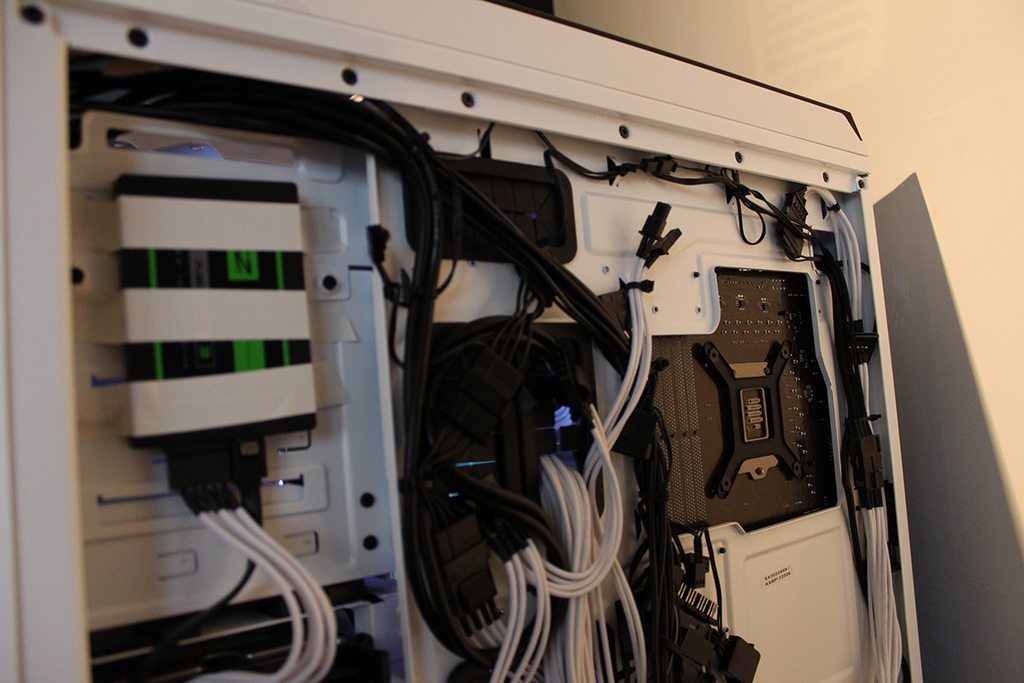 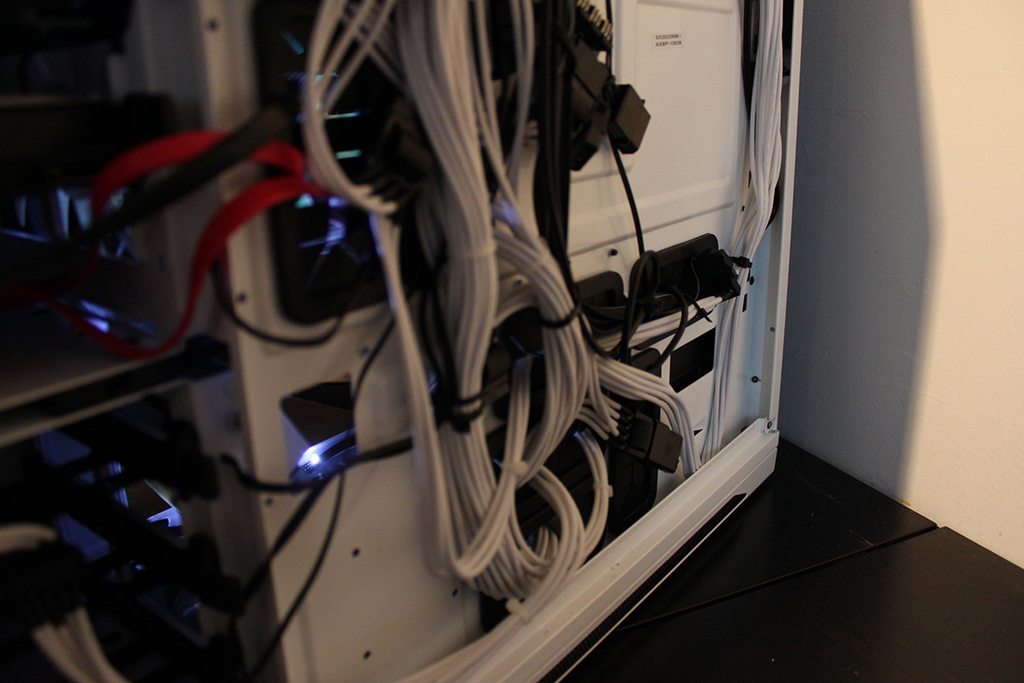 your 1st build? Blimey well done! Am thinking of buying my 1st Asrock Board as they do seem to provide us with good value. Let us know how you get on with it.

what horror stories??? and yeah nice build by the way

That is quite impressive for your "first ever build"

weirdGuy said:
I wasted a good hour fooling around in the bios wondering what the hell was wrong until the girlfriend asked why those cables down there weren't plugged in. -_-
Click to expand...

Astounding honesty buddy!! I would have made up a quick reason, then plugged them in when she wasn't looking

Really nice, congrats on your first build man! Do the corsair fans come with interchangeable coloured rings or did you get them separately?
Cheers

Snomad said:
what horror stories??? and yeah nice build by the way
Click to expand...

I always, always heard stories of people shorting boards really easily. I think I just found the stories on random forums at silly hours, & it just made me go "EUGAH, OH NO". :/


tjp148 said:
Really nice, congrats on your first build man! Do the corsair fans come with interchangeable coloured rings or did you get them separately?
Cheers
Click to expand...

Thanks, & yeah they come with the 3 rings in the picture. Red, White & Blue.


markyboy91 said:
I really like this build well done

The case is really amazing. I'm endlessly looking at it in awe. I can't compare it to any recent cases, but I'd highly recommend it to anyone after a large case.

Thanks all for the comments, really appreciate the kind words!

Hopefully have a little update soon of the fan controller & some more white cabling to finish the build off. Still need to invest in the graphics card, but I think that'll wait til after Christmas. Hopefully going to bench it, overclock it & bench some more once I get the controller really see what its capable of. As for now it's performing well in my everyday use; eg. Large Photoshop edits, AfterEffects rendering, C4D modelling/rendering.

Had a problem with the H100i where the custom LED in the block changes colours randomly, but that is literally the only issue so far. :s

The case is really amazing. I'm endlessly looking at it in awe. I can't compare it to any recent cases, but I'd highly recommend it to anyone after a large case.
Click to expand...

You sir just convinced me to get one