thought i'd take my suspension like a man and actually build my pc rather than yak about it. 'Borrowed' some Kingston RAM to build her as the ballistix i've ordered is coming from Mars.

It's my first build in over 15 years and the first I've done solo. Comments greatly appreciated, I must say the 'cable management' of the zalman is worse than I feared but boy is she purty. Will post more pics later if interested. Thanks to OcUk for all the bits, they supplied everything in their except the RAM and psu, inc the case for £100

ok 1st pic of everything laid out..

initial testing with the stock hsf 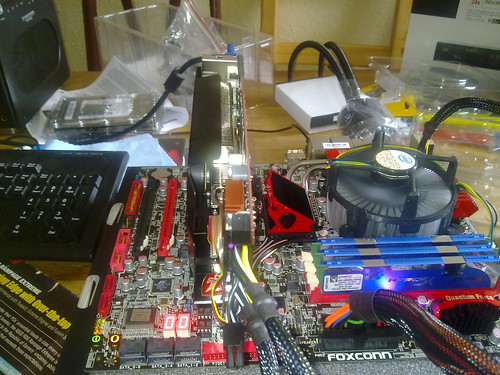 H50 mounting from inside 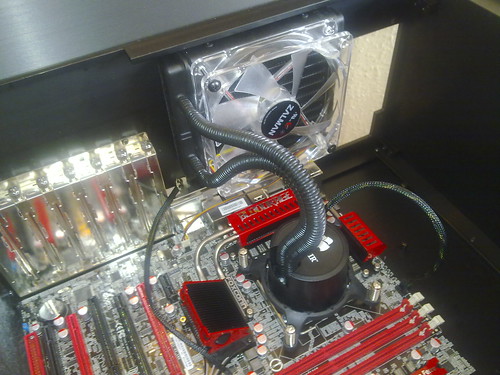 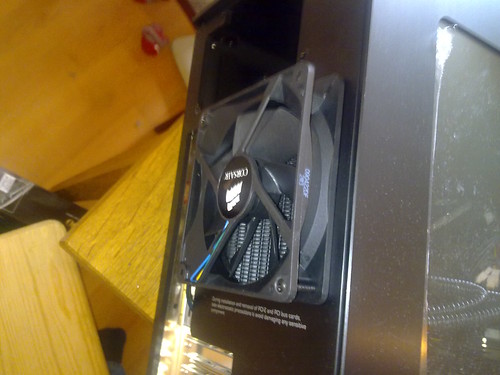 both fans side on, rad is nicely sandwiched 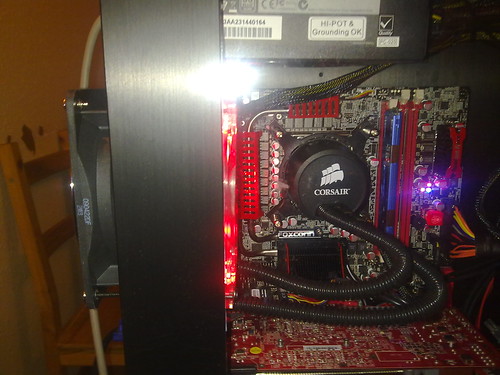 sorry what do you mean supplied everything for 100 quid?

oops terrible gramma. Tres tired. Just the case for a £100.

everything depended on the quality of that sandwich

updated for tonight, off to fight the horde.

I feel excited when hardware is laid out in front of me, I can only imagine how it felt to work with that

I can't quite see the sandwich filling, I presume turkey or chicken but it's not a great pic. Good choice on the ripple though

unfortunately said sandwich is long gone.....leftover pork from sun lunch, heated up and smothered in apple sauce. Not the best but not bad

Pics are off Nokia N97 so pretty shabby unfortunately. It was too much grief at the time to go to the studio for a camera so thats what I used. Once the RAM and monitor... arrives I'll get some better pics. Not that I'm completely that way inclined but the red fans look pretty amazing, it's amazingly quiet at idle, under load the gpu is audible but not bad imo. Pity my netgear dongle hates 64bit OS or I'd have had it online and been using it now.

You may want to consider swapping the radiator fans over. The H50 works best if the fans are used as intakes with cool air from outside the case blowing over the radiator instead of warm air from the case.

Its certainly not required but it should give you lower temps, though its a bit of a faff and you will have to change the direction of the other case flans to establish a good airflow with a rear intake.

considered this. gt900 has 2 x 80mm intakes on the front. The hdd bays are behind them faffing the airflow somewhat. Decided to run these two as intakes at full pelt (pretty quiet anyway thanks to the case construction) and use two slower 120mm to exhaust.

If this proves no good I've got a template ready to cut the roof and mount the H50 their as an inlet. As things stand I'm concerned that the psu / gpu fans are robbing a fair whack of the flow from the intakes.... temps seemed pretty good on quick check. Don't have SS but cpu was running 10 degrees cooler at idle inside the case than when I tested the system outsied using the stock HSF.

Done any overclocking yet?

nope, itching to give the bloodrage a whizz. Tbf though this machine needs to work for a living so will go for the 4ghz and see how temps / mem runs there and maybe drop back to mid to high 3's if needed.

With that cooler 4GHz will be a breeze mate, guys running their D0's at 4GHz and temps are staying below 70c which is excellent for these chips.

Looks good so far though mate.