Accelero Xtreme III on a Gigabyte OC GURU 980Ti. Will it fit?

The cooler on my Gigabyte OC GURU 980Ti (note: not the G1) is dying pretty hard. Fans are making some awful rattling / squeeking noises.

I'm looking to replace the cooler. Research has put me onto the ARCTIC Accelero Xtreme III (I hear the 3 is a better fit for the 980Ti than the 4 which was designed for the 10xx series of GPUs), but I wanted a definite yes/no whether the cooler will fit the GPU's PCB.

I'm unsure if the card I have uses a referrence PCB or not, and ARTIC suggest that I should be aware of my cards PCB layout. This is where it has me a bit lost.

and am wondering if anyone here can give me a definite Yes/No answer?

I'm more than comfortable removing / replacing the parts, it's a question of making the right purchase as funds are a touch limited.

Any help with this is greatly appreciated. Thank you.

When I'm unsure of a PCB layout I usually check whether the reference waterblock fits that model.

Have you tried searching "Gigabyte OC guru 980Ti reference PCB"?
Haven't seen the latest Accelero bits but usually they list compatibility on the website too.

It doesn't appear to be a reference PCB. I found another thread about it here - https://forums.overclockers.co.uk/t...twf3oc-6gd-reference-pcb-waterblock.18698286/ It's the exact same make and model as mine, and there is a photo part way down of the PCB without a cooler block.

I just don't know if that means the ARTIC cooler I'm looking at will fit or not.

From a little research it sounds like your Windforce is a similar PCB to the G1, so definitely not reference. If you get a photo of your PCB and a reference one, to scale, you can check if the GPU chip/ mounting holes are in the same location. That's a good start.

Your cooler is known for being pretty much as good as it gets, have you considered replacing the fans instead? You could even just strap some 92mm or 120mm fans to the heatsink, I've had great results doing that before.

LuckyBenski said:
Your cooler is known for being pretty much as good as it gets, have you considered replacing the fans instead? You could even just strap some 92mm or 120mm fans to the heatsink, I've had great results doing that before.
Click to expand...

I've actually just this second finished watching a Linus video about doing just that. Yeah, I'm considering it. Honestly, I wish I could just buy a new Windforce Cooler at this point and replace it, but it seems that's not an option without buying a used one, as I'm 99% sure the card isn't covered by warranty anymore as it's almost 2 years old.

You could make an offer on the popular auction site, there's a few going for parts. Personally I love a good hack and fans are cheap/free. When I did it, performance was far better and quieter than before!

Yeah, i'm not a fan of the hack, but I can't deny it's potential. I even know the fans I'd use, too. Corsair have these really nice maglev fans. Super quiet. I had one of the 120mm ones on my old case before I swapped to my current NZXT. I'm pretty sure I can find them in 90mm as well, which looks like the size I'd want for this hack job.

Thanks for your help. Much appreciated. I feel a bit less panicky about it now. Still annoyed as all hell, but that's on Gigabyte.

My pleasure. If it encourages you, this was the quietest card I've ever had! (HD7870) 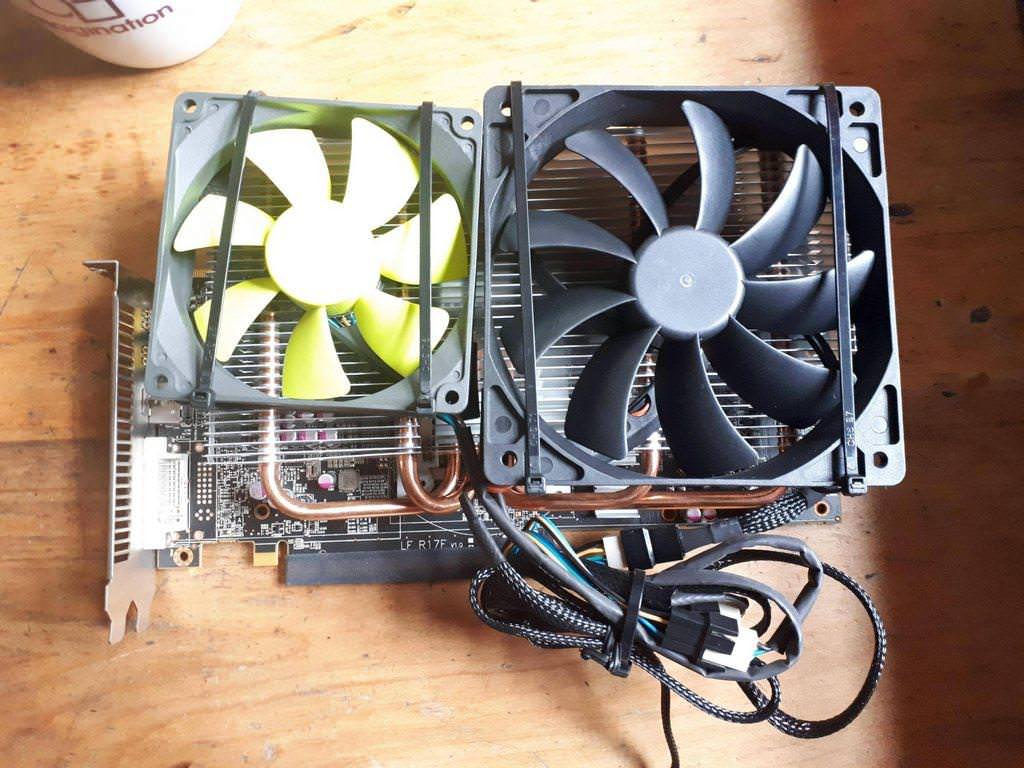 I've just ordered 2x ML120 Corsair Maglev Fans, an IFixit Pro Tech toolkit (been wanting one of these for a while anyway) and a whole bunch of super heavy duty, extra wide and long cable ties.

Tuesday is gonna be fun. I'm kinda excited about this now.

*EDIT* Also, as a newcomer to the OCUK forums, I gotta say, you've been very helpful and welcoming. The very good things I'd heard about this community appear to be spot on.

That's great to hear! I joined quite recently too and I've really enjoyed being part of the boards, it's part of daily life now to check out what's being discussed. Stick around!

I did a similar thing with a GTX970 with a Strix cooler. The original fans started clicking so I took the whole metal frame off the cooler, just leaving the aluminium heatsink array. To this is strapped, centrally, a 140mm Thermalright TY something PWM fan.

I did consider if I needed a second, perhaps 120 or 92mm fan but after reviewing the temperatures I just left it at the 140mm.

A year on and nothing has melted. Stuff works as it should. The only minor drawback is the 140mm PWM fan doesn't stop spinning like the stock fans did.

It's very much a ghetto hack and it's not pretty but what the inside of my computer looks like is of little concern to anyone.

Are Gigabyte graphics cards not warranted for 3 years ?
https://www.gigabyte.com/uk/Support/Warranty/Graphics-Card

Yeah I've since discovered this as well, but I'd have to RMA the card and that would leave me without a functional rig or any decent connectivity (outside of my smart phone) until the card comes back again and is confirmed working. That could be north of a week or 2. This is simply 100% not an option for me I'm afraid.

So your CPU doesnt have onboard video ?

varkanoid said:
So your CPU doesnt have onboard video ?
Click to expand...

I honestly don't know.
Does the intel i5 6600K have onboard video? Can it play all the things I usually play? GTA:V, MHW, R6:Siege, Empyrion, Conan Exiles? If not, then it doesn't really make a difference if my CPU has onboard or not. If it can't handle those games then it's a no-go.
It also doesn't really matter anymore as the new fans arrived yesterday and the cable ties etc arrive today.

Yes it does Intel® HD Graphics 530 so would mean at least the PC would be functional.

Lets have pics when you have done.

Update: All done, and it works like a charm!

Not the prettiest component on the board anymore, but i'll take performance over a shiny housing any day.

As requested, a couple of pics.

The cable ties were a bit too thick, but eventually fit. I'll by thinner ones in future which will also help with the fan on the Left (the pic where it's powered on) as the cable tie was gonna block the connectors on the card, so I had to improvise, but it's REALLY secure. I was pretty skeptical, but there is zero wiggle to it and it's really on there.

Idle temp is down by 5-7°C and under load (GTA:V and Rainbow 6: Siege so far) temps are down by anywhere up to 18°C. This is compared to the temps BEFORE the cooler started to fail.
This has turned into a really solid upgrade, albeit one that might need to be redone with better fitting cable ties in the near future, but ultimately a resounding success.

Thanks all of you for your help. Sincerely.

At the moment, air is going to be sent backwards towards the intake at the inside end of the card, and it's just going to be getting into a right mess in the middle, where both fans will be fighting against each other. The hot air coming out the back has got to be going either up into the CPU, or back around for another go in the GPU. If the fans were tilted to blow towards the back of the case, everything would be flowing the same direction. Admittedly, the hotter air from the back would be going towards the front, which isn't ideal, but there's already a big mess in the middle, not to mention the recycling from the end.

I'm gonna redo this in the near future anyways. I want to swap one of the 120mm fans for a 90mm (i think it'll fit better), and use thinner cable ties so i'll try angling them then and report back. Might not be for a couple of weeks yet, but I'll update once it's done. Thanks!

Awesome! Thank you for trying it! I was thinking about trying a tower cooler, but that's going to mean I need to consider the VRMs and ram etc separately, whereas angling the fans could solve all the issues, and prevent mixing.

When you test, make sure you check all your other temps too, since really the idea is preventing mixing in the case, which may be felt by everything rather than just GPU.
You must log in or register to reply here.
Share:
Reddit Pinterest Tumblr WhatsApp Email Share Link
Top