Grateful for any guidance or suggested solutions to remedy the below. I’ve been looking at all the forum’s, threads and various YouTube videos to try and fix this. My hardware was initially purchased and put together myself in May 2020 (unless otherwise stated):


Have been having intermittent issues for a few months, since July, with my build freezing either in game (CoD:MW,CW+Warzone; The Division 2; Star Wars Squadrons) or after exiting something which might cause high utilisation. Initially I believed this was due to my settings being set to high with the addition of raytracing on, so reduced these down to normal levels (raytracing off). However I also noticed the GPU was running without fans spinning automatically and so would heat up and crash, which led me to think it might have been a temps issue so invested in an AIO and more case fans plus set custom fan curves on the GPU in Afterburner from start-up (this issue seems to have subsided recently for some reason other than the new fans).

More recently the instability raised its head again. Having done more troubleshooting and investigating I noticed CPU was at +80% utilisation with GPU in single figures, therefore thinking the integrated CPU graphics were running games (only) and GPU was sitting near enough idle. This gave me the impression the GPU wasn’t being recognised / used for games. Having looked through a number of forums and on NVIDIA’s website I adjusted the Manage 3D settings to force use of my 2070S, which seemed to work for a while but then would cause crashes after a little time, if I switched screen [Alt tab] (to look at discord for example) or sometimes when I “quit to desktop”.

To explain the crashing experienced; this is never BSOD. The picture stays up but is unresponsive, with audio on a few second loop. I have control of the mouse but not (always) able to pull up task manager or other monitoring apps to see what’s going on – let alone close the frozen game or force a restart. Always need to do this from the case restart. The times I have been able to pull up task manager the GPU appears as -1% utilisation but can’t run through any of the others as this monitoring freezes also.

As I’m sure you can imagine, the inconsistent performance is driving me crazy(!!). I’ve recently upgraded the RAM as read this could have been an issue but not resolved.

My neighbour, who is more savvy, has also tried to troubleshoot over the past few months but drawing a blank also with no clear signs of what might be failing.

If it’s a hardware issue then I will happily change any parts suggested, it’s just identifying the culprit that I’m really struggling with.

you have NO integrated graphics on a 3800X. Is the RAM at stock speed or XMP enabled ? If XMP try it without. If you can, use two seperate PCIE cables to the RTX2070.

RAM was XMP at 3600, now turned off and at stock (3600). Have added an extra PCIE cable (used before and after the XMP change). Same issue persists(if not a little worse?). Game plays then on leaving to desktop / multitask, screen freezes and all becomes unresponsive. Attach a photo from GPU-Z from the last crash (before XMP change) taken on my phone.

Try running the memory at lower speed 3200mhz as 3600mhz is not stock for that board.

Lowered to 3200 in the bios but no change to stability (I believed this could be OC'd a lot higher on my board), if anything it seems to crash quicker without A-XMP and RAM adjustments. Below are some shots after the last crash an hour ago. Running mem test (x8 simultaneously) brings up no errors in the hour or so I've run it - will run overnight. 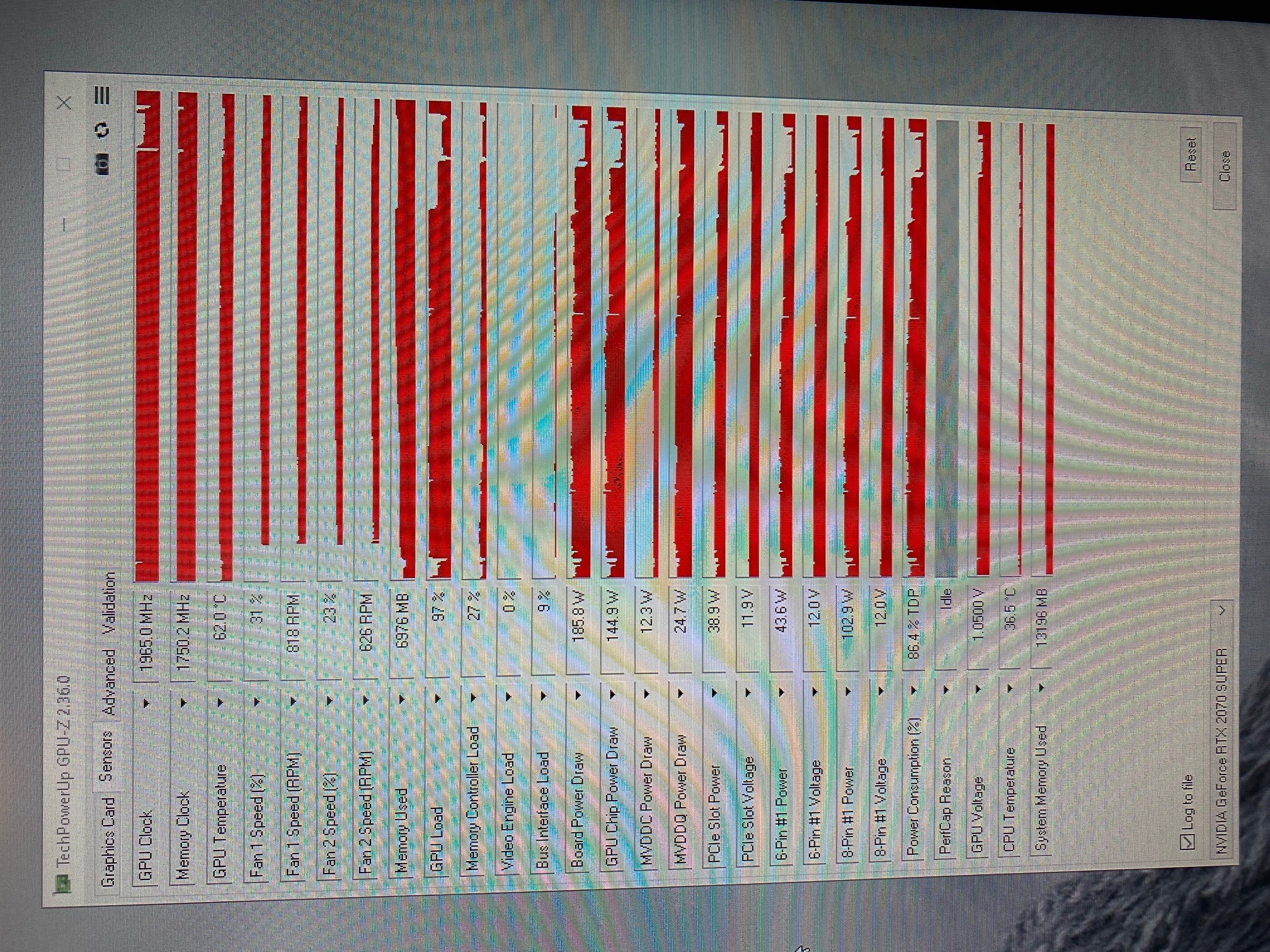 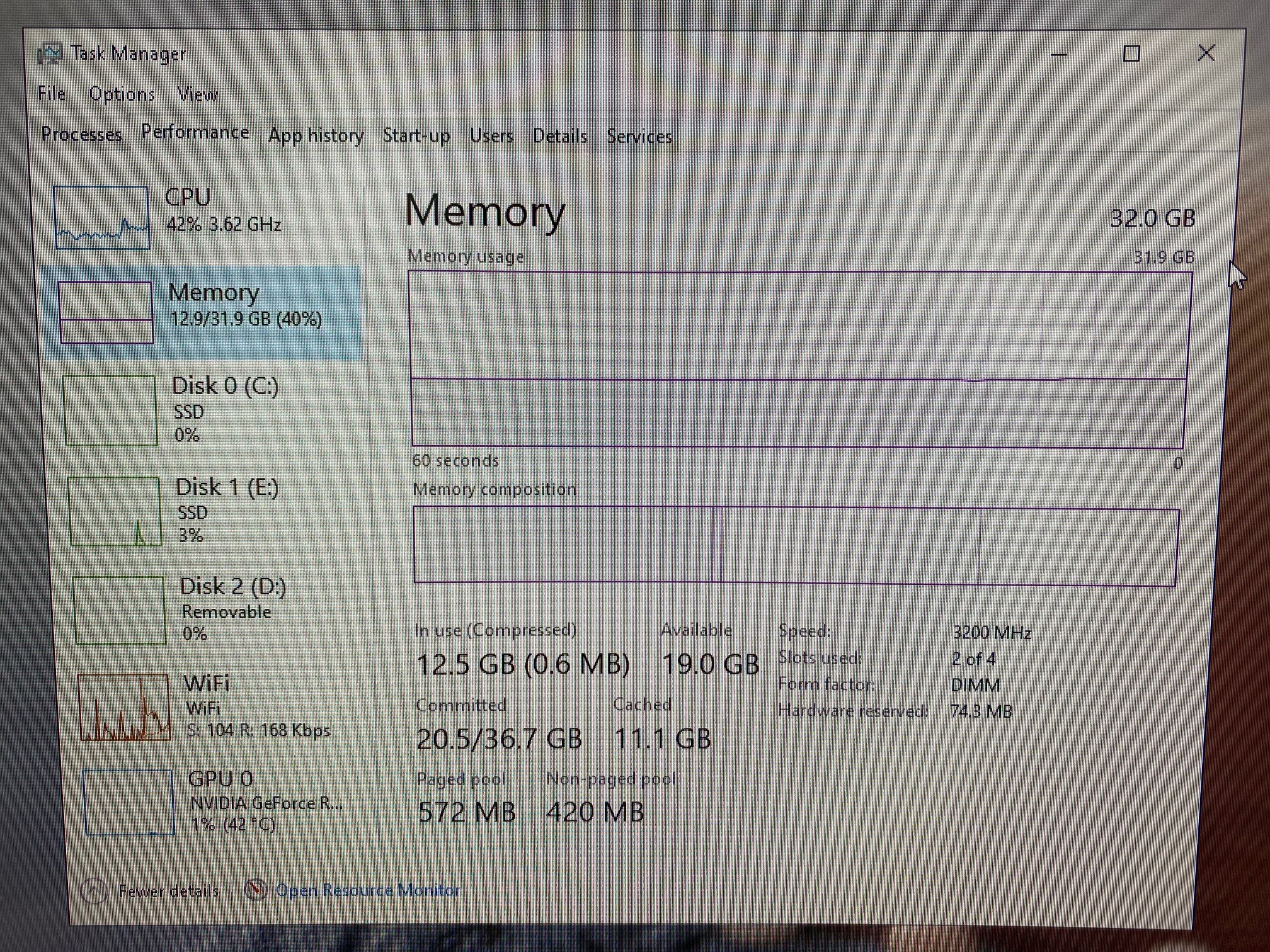 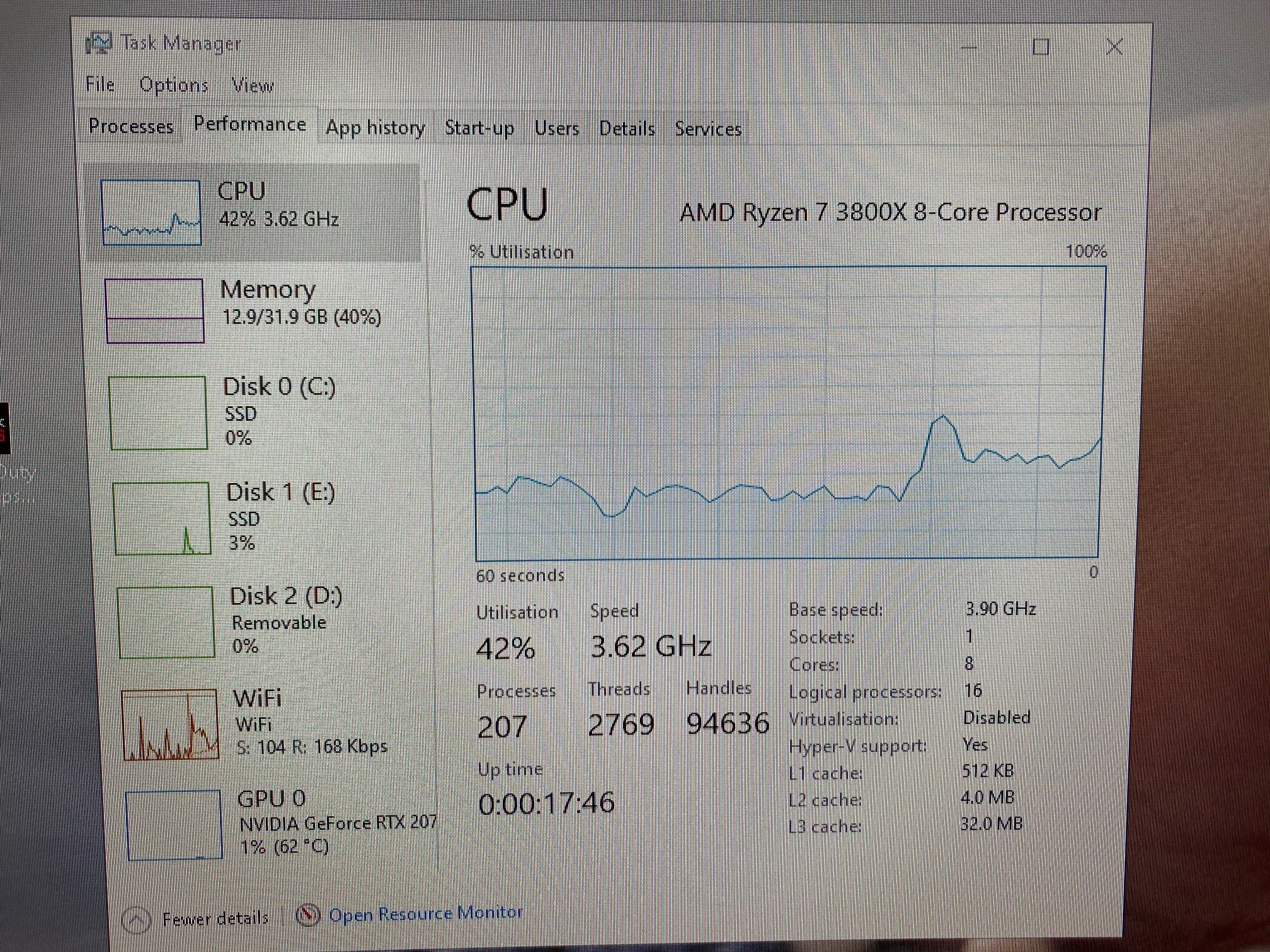 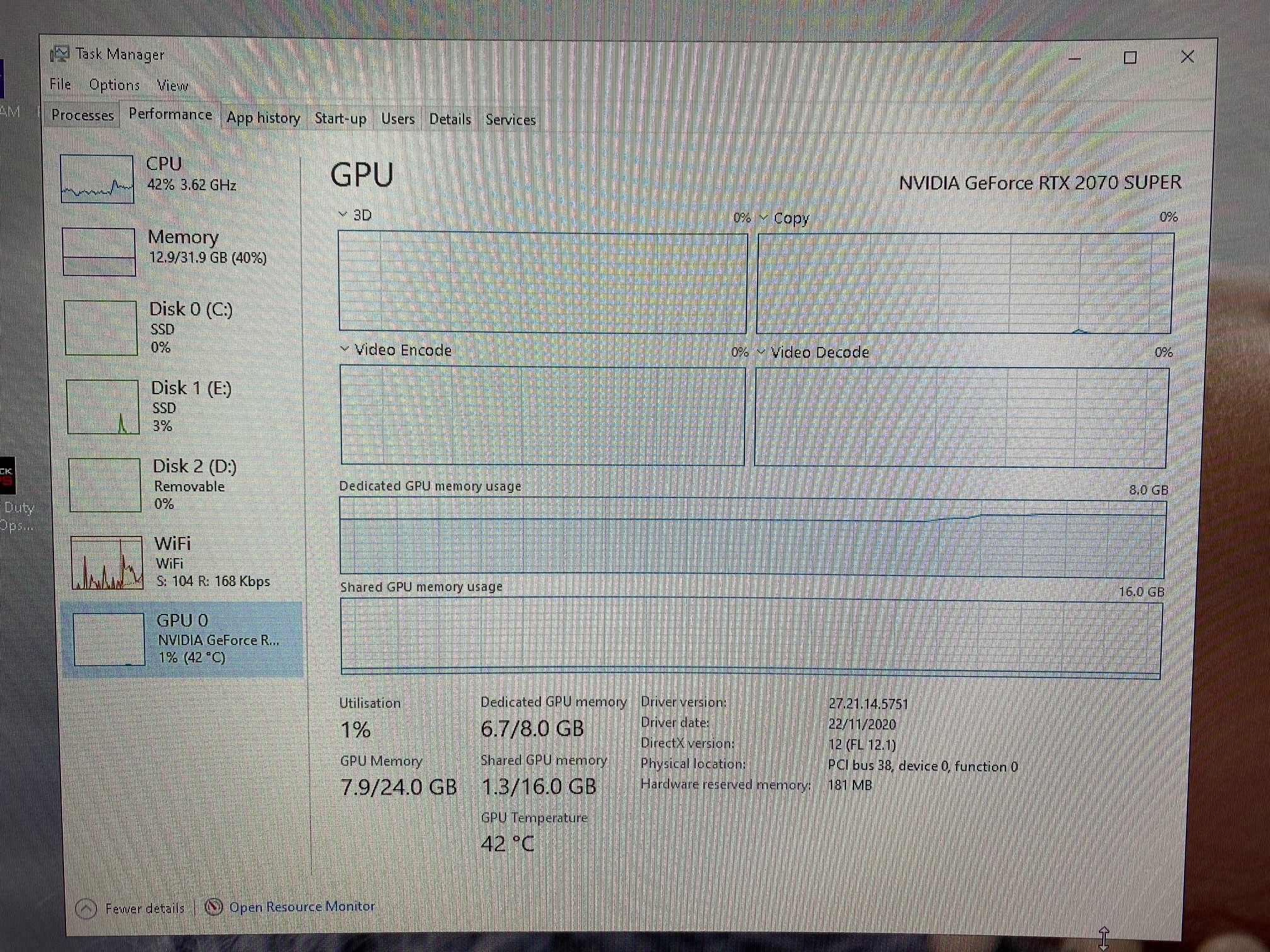 Additional tests: I reduced the power limit to 95% in afterburner and enabled custom fans to force spinning - no change to stability. Re-ran Heaven4.0 with GPU-z though and no issues found. Drawing a complete blank.

Thomas Lee said:
Lowered to 3200 in the bios but no change to stability (I believed this could be OC'd a lot higher on my board), if anything it seems to crash quicker without A-XMP and RAM adjustments. Below are some shots after the last crash an hour ago. Running mem test (x8 simultaneously) brings up no errors in the hour or so I've run it - will run overnight.

Additional tests: I reduced the power limit to 95% in afterburner and enabled custom fans to force spinning - no change to stability. Re-ran Heaven4.0 with GPU-z though and no issues found. Drawing a complete blank.
Click to expand...

That memory is running at 3500? Without xmp you should be at 2133. I would turn of DOCP/XMP entirely so you run 2133, test for stability and tune from there. 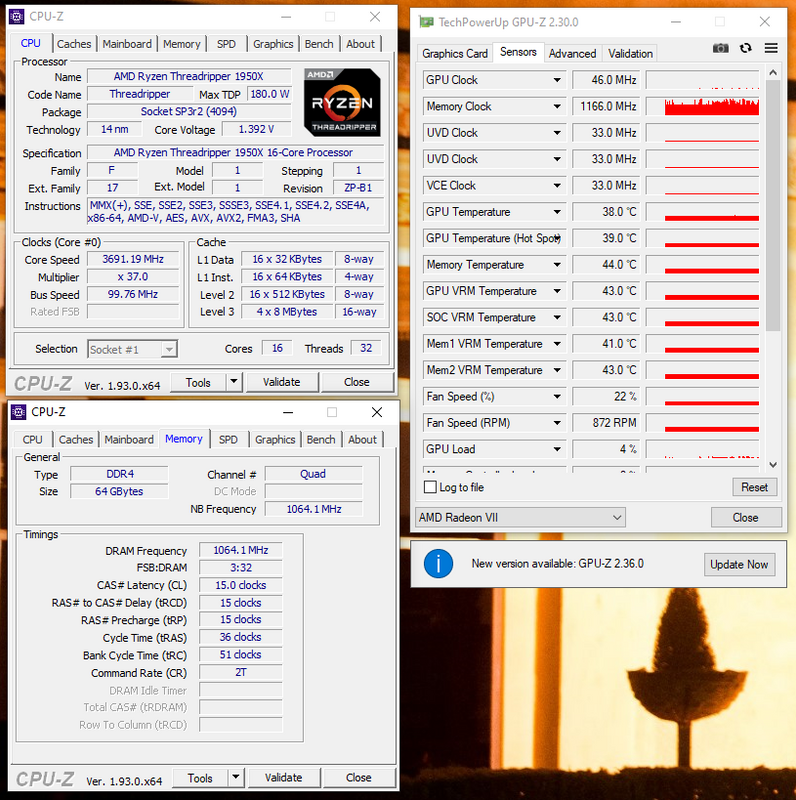 Here you go. Thanks in advance for any thoughts - this is well over my head now! 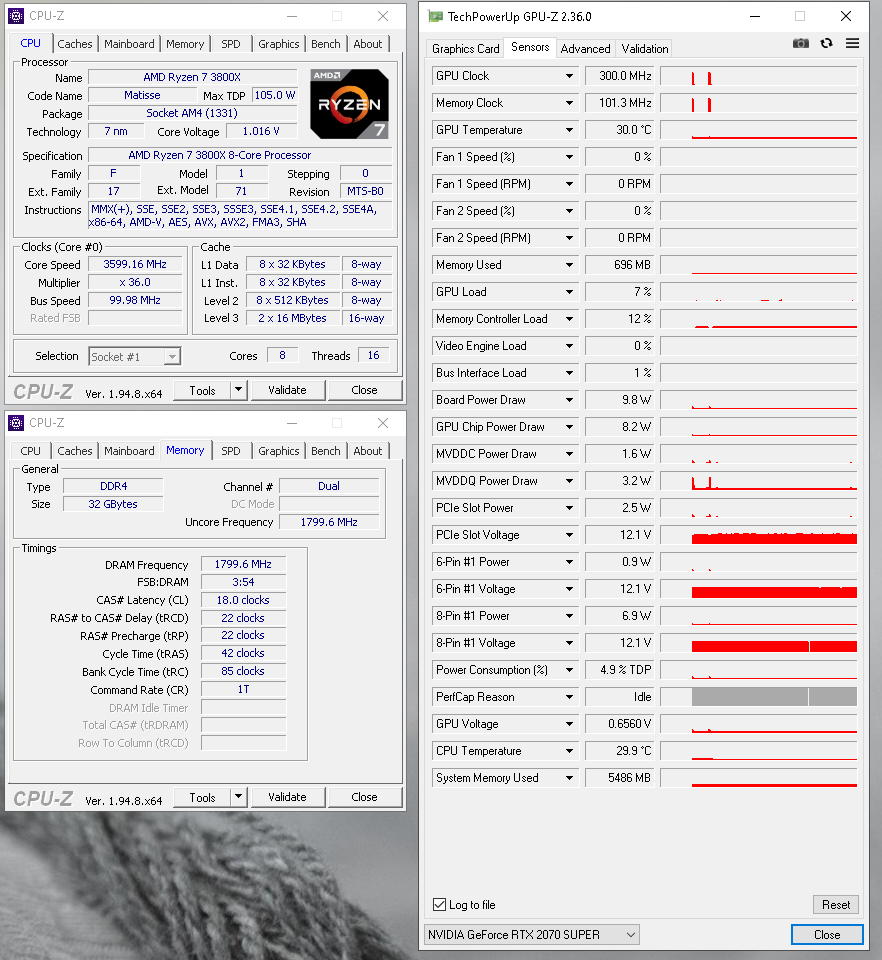 As others have said you need to start with the memory at 2133 or whatever stock is on that board and go from there.

Leave timings as they are and just lower the speed.

Have you checked windows event logs ?

are you running afterburner with rivatuner in the background when you've had the game " Freezes/unresponding"?

I will try memtests in the next 5mins and run through to tomorrow morning. from all the above so far, it seems general concensus is it's a memory issue?

I will try memtests in the next 5mins and run through to tomorrow morning. from all the above so far, it seems general concensus is it's a memory issue?
Click to expand...

Could well be but its a tricky one its a case if ruling things in or out.

I was having the exact issues you have when I upgraded my gpu from AMD to Nvidia.
I was running with afterburner and Rivatuner for the stats and overlay.
I was getting random freezing during gaming, but never during benchmarking. What I did was fully uninstalled Rivatuner and Afterburner.
Played, and tested and benched with no issues. Was only when I reinstalled rivatuner that I got the freezing again.
There seems to be something with the program that just borks my build.
At present I'm running just afterburner v4.6.315910 Beta 4 with none of the active plugins enabled and no freezes
Not saying it's your problem, but it could be.

Edit: I also upgraded to the newly released Nvidia drivers that came out today too

Hakanese said:
are you running afterburner with rivatuner in the background when you've had the game " Freezes/unresponding"?
Click to expand...

Hi Hakanese - Afterburner is open but everything on default. Never heard of Rivatuner - are you suggesting I should download it? When I first downloaded afterburner in July after I notice GPU crashing as thought it was overheating with no fans spinning - so uninstalled issues persisted. So have reinstalled and kept the fan speed on in system tray to make sure I could see they were spinning. Never OC'd though, only recently have I tried underclocking to see if any difference.

Rivatuner or RTSS is an additional program that is an optional install that you Afterburner asks you to install along with it, it's a small blue screen icon in your tray by the clock near the afterburner plane icon. It's job is to make the little overlay where you can see your gpu's clock speed, temps, fan speed, voltage etc.
I'm saying for the moment don't install it if you don't have it installed.
If you have it, uninstall it, also in afterburner go to Monitoring, click the 3 dots by Active Hardware Monitoiring Graphs and make sure everything is unchecked Active Plugins Modules.
Restart the pc and see if it freezes up.
Also update your drivers, I am going to be reinstalling Rivatuner to use the overlay and see if the new Nvidia drivers has fixed my issue.

How old is your psu?

.
can u swap for another g card or other ram. ?

adrichardson81 said:
How old is your psu?
Click to expand...