Escape from Tarkov is a new narrative hardcore MMO mix FPS of / TPS and RPG genres. Protagonist finds himself in the modern Russian city sunk into anarchy: only the fittest will solve the mysteries of Tarkov and get out alive. In dangerous simulator Combat & hazardous environments uses multitude of system modules for full gameplay immersion and sense of reality.

Closed beta of Escape from Tarkov by Battlestate Games studio is planned for Q1 2016 - sign up at http://www.escapefromtarkov.com

Escape from Tarkov - hardcore story multiplayer online game is at the intersection of genres, FPS / TPS and RPG. The hero of the game is in modern Russian city where anarchy: only the fittest will reveal all the secrets Tarkova and get out of it alive.

Combat Simulator in hazardous conditions using a variety of system modules for immersive gameplay and a sense of reality. Closed testing Escape from Tarkov by Russian studio Battlestate Games will start in the first quarter of 2016 - sign up in the ranks of the beta testers on the project

This looks okay but first thing I thought was they need to fix the FOV! Sound effects are awesome though and could be one to look out for in the future.

I wonder how much that will stress our graphics cards. Looks good, so one to keep an eye on.

I've never been so impressed for an FPS!

One thing that just clicked we have so many games where you can shoot leaning from corners. Why is it every game you have to strafe out to lob a grenade

Some guys have been doing some digging on MHQ and they have discovered that this is a reskin of an old game which has the same assets, music called Russia 2028. The video is pre-alpha that was published in 2012. They believe that Escape from Tarkov will be using Unity not Cry Engine.


So this leaves open some questions, what happened in 3 years? Is this a reskin/rebrand of 2028? Also we all know that Russians love Microstransactions so will this game feature it?

Events take place in the fictitious Norvinsk oblast (province), a special economic zone created as a transitional area between Russia and Europe. Great business conditions for big international companies attracted not only law-abiding firms, but corporations with shady dealings. Two years ago, Tarkov, the biggest city in the province, became a scene for a scandal caused by a transatlantic company. Six months later a political struggle escalated into armed conflict between UN peacemakers, the Russian military and two private military companies. Borders of the province were closed and those who ended up in the middle of a local war were separated from the outer world.

Today Norvinsk oblast has become a scene for active agents of two private military companies hired by two sides of the conflict. USEC works for the scandalous international corporation Terra Group and provides local skirmishes in order to obstruct investigation of the company's activity by local authorities. Moreover, according to intelligence, USEC affords protection for the illegal practices of a foreign company. BEAR, which, on hearsay, was created by the direct order of Russian government, and operates as part of the official Norvinsk authorities and searches for any clues of illicit activity of the Terra Group.

With every new day the situation in Norvinsk oblast becomes stranger and more complicated. Panic reigns as the city is plunged into armed conflict: citizens flee while those who stay begin to scavenge whatever they can. Taking the new realities as a matter of course and huddling up into well-armed gangs, scavs start their own battle for territories. Today, Tarkov is divided by unseen borders set by bandit groups. Up-for-anything, they won't stop short at killing innocents or waging a war against two private military companies.

Players will enter the battlefield as surviving ex-mercenaries. After choosing one's side, USEC or BEAR, the protagonist starts off in the middle of the city. Tarkov is blocked by UN forces and Russian military, supply lines are cut, communications are lost – in these realities everyone decides by himself or herself, how to survive and get out of city.
Click to expand...

Never heard a bigger alarm bell in all my life.

Never heard a bigger alarm bell in all my life.
Click to expand...

Suvarium(?) can't remember the name, that was awful

Location
Close to Swindon, but not Swindon

This looks incredible! Will look forward to playing it!

Never heard a bigger alarm bell in all my life.
Click to expand...

For those who have questions about EFT, we've managed FAQ.

Q.What is Escape from Tarkov? Who is the developer?
A.Escape from Tarkov is a hardcore story-driven MMO that combines FPS/TPS with RPG elements. It is being developer by Battlestate Games, the Russian game studio based in St. Petersburg.

Q.Will the game be free to play?
A.No, the game will be distributed as buy to play, bought once and for all. There will be no microtransactions in the game. However, we do intend to release paid DLCs later on.

Q.Will the Escape from Tarkov be a session-based shooter? What game modes is it going to have?
A.In the classic meaning of this term - no, the game won’t be session-based. It has several playing modes. The player only has one life, and, with dying, he loses everything that was brought to the location or found in it.

The first and essential mode will be available with the game release, the story mode. The game session (typically an hour or hour and a half long) will take place on a large, about 5-10 sq. km., open location. The player will have to consecutively clear all of these raid scenarios, with several possible exits, each determined by the game story. By completing one scenario, the player unlocks the next one. Players can return to the previously unlocked scenarios in search for particular loot or more detailed exploration (which can lead to the uncovering of side quests and locations)..
When all scenarios (there will be around 10 of them) are completed, a free roam mode will be unlocked. In this mode, player can move around a 15 sq. km. area without any time limits. Moreover, the game is going to have an Arena mode, which closely resembles gladiator fights.

Thus, although EFT technically does have a session in the scenario mode, it is only determined by the story, where player’s character has to escape from Tarkov. The free roam mode will have no time limitations, and in the Arena the game session will be limited by death either of player’s character or his adversary.

Q.Will Escape from Tarkov have a story?
A.Escape from Tarkov is a story-driven game, despite ins online foundations. Everything happening in the game will be determined by the story of either main chain of events or by numerous side quests. Side quests, by the way, can be handed out by traders, but some of them can only be discovered and solved by the player, without any hints whatsoever..
Click to expand...

Twirly I just found out about this game DUUUUDE its insane ! we need to get some bf guys into this.

The setting really reminds me of Stalker/ Metro. Apparently some of the devs used to work at GSC Game World so that probably explains it. Graphics are beautiful.

Xcept1 said:
I was quite interested until I saw the silly pre-order bonuses

What are the bonuses mate?

Stupid stuff that gives people an advantage straight from the off.

Not want you want from a "RPG/Simulator with MMO".

Smrtka said:
Twirly I just found out about this game DUUUUDE its insane ! we need to get some bf guys into this.
Click to expand...

I was excited about it too at the start but the more this game develops the more uninterested I get.

On Dec 30th they put up their pre-order page and despite their attempts to calm the storm they are failing. It's so typical of Russian developers, in a country where hacking is rife it becomes more feasible to develop a p2w/micro-transaction game instead. 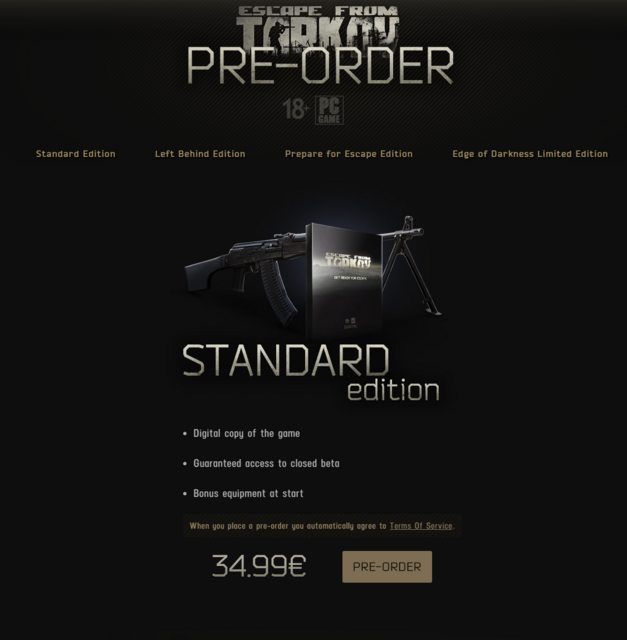 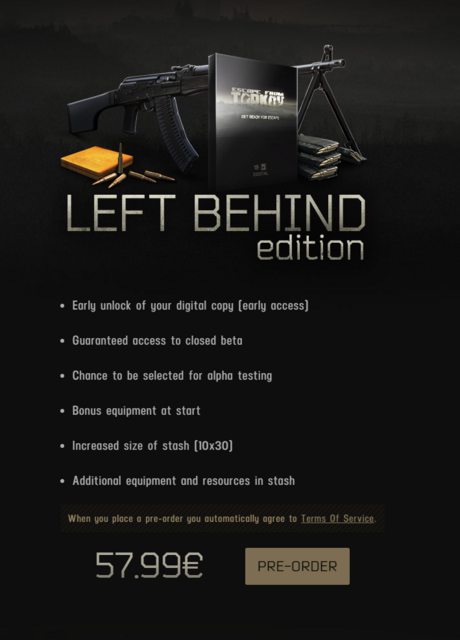 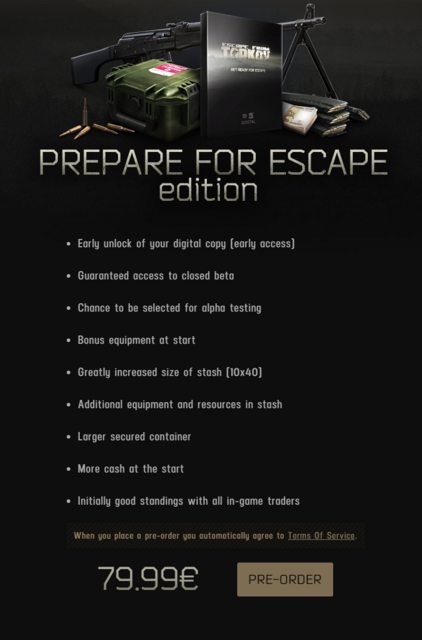 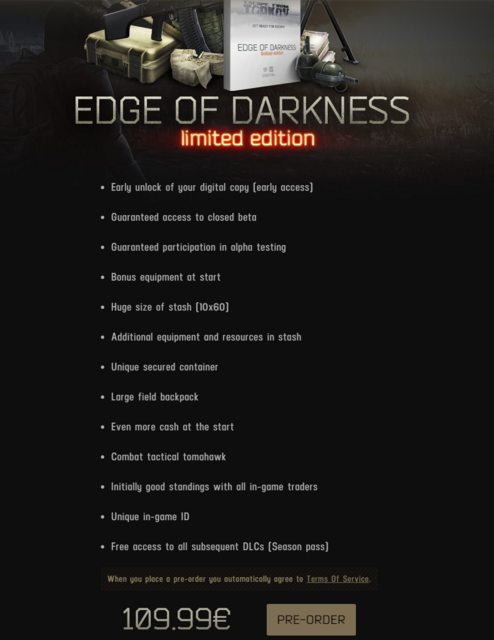 Despite denying that the game will have no microtransactions the pre-order bonus/incentive ******** strikes again. For a developer that is generally unknown they should have either gone early access or kickstarter.

Game just looks like a glorified DayZ without the Zombies. I'll keep an eye on it though as they are active in answering community questions/concerns over on their FB page. Don't ever expect me to pay for Alpha or Beta access. Encouraging this act is not good for consumers or the gaming industry.
Last edited: 10 Jan 2016
You must log in or register to reply here.
Share:
Reddit Pinterest Tumblr WhatsApp Email Share Link
Top Bottom