Thought this could perhaps do with its own thread as a separate project so that it doesn't get scattered in my main sim rig build (link here...) Button boxes are quite simple to make once you've figured it out and thought having this all in one place might be useful for anyone thinking about making one!

So I wanted to make a multi-function button box that I can use for both flying and driving, though it will primarily be used for flying games and space games... as such I decided to model it somewhat as an FCU (flight control unit) style device which also keeps it up out of the way of my touchscreens on the rig.

I modelled it very vaguely off an Airbus for familiarity - I will be using it in VR too so need to be able to feel the different controls, and I decided that given I'm familiar with the airbus style buttons that would be a good choice, they also have a different head shape for different functions on the FCU like speed/HDG etc which helps identify them by feel.

First things first I did some research into the electronics side and settled on the Leo Bodnar BU0836A and it's associated breakout matrix board. The latter does require soldering in some pins but nothing particularly challenging. That defined the number of encoders/switches/potentiometers I could have and so I set about designing my button box!

Here is the design I ended up with, 5 rotary encoders with push along the top, 3 square momentary buttons in the centre, two guarded toggles, 3 unguarded toggles, 4 potentiometers, one master switch, a start switch and a two way momentary rotary. I may later add a remote module for gear/flaps/mixture too. 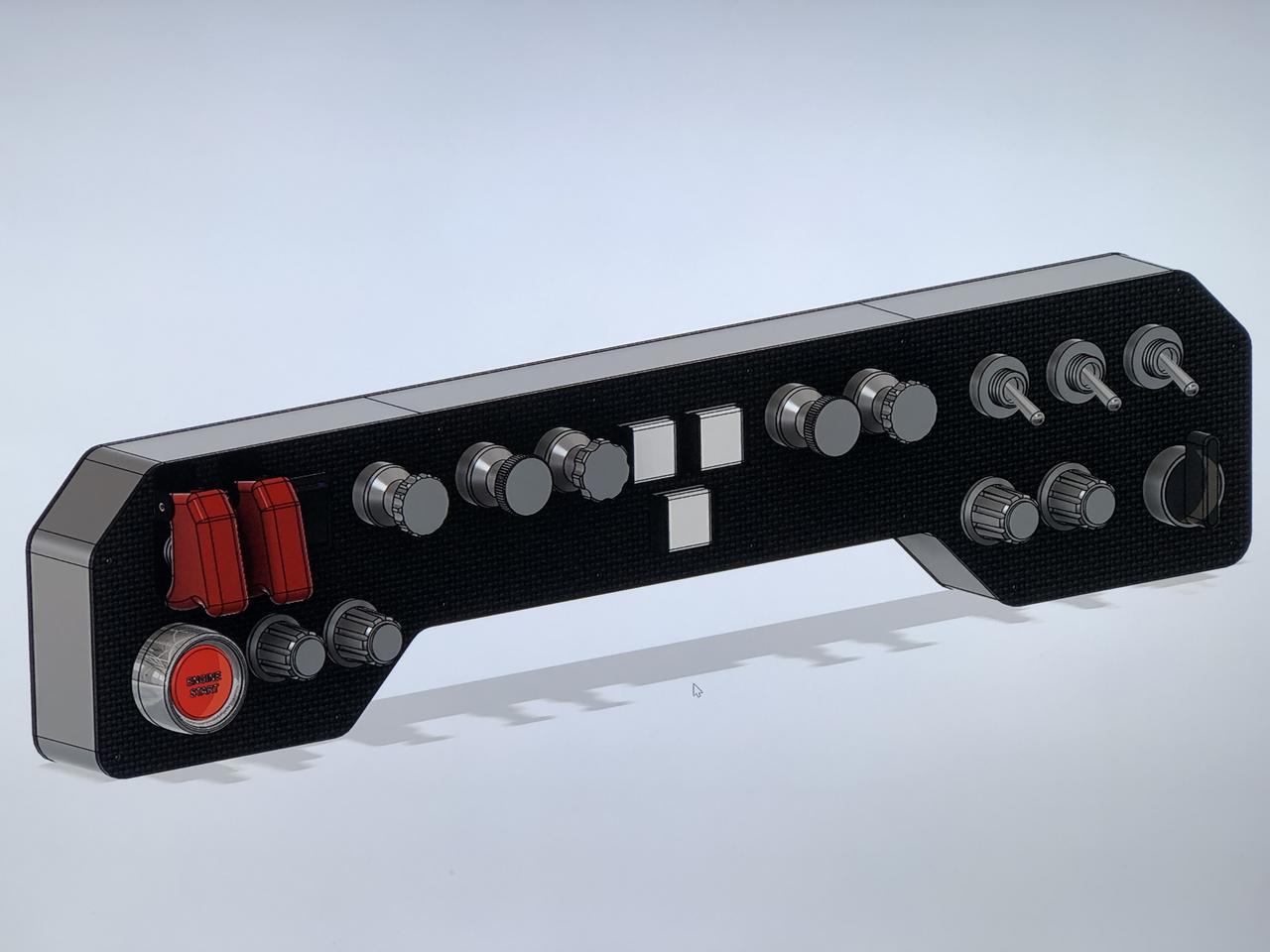 The button box is quite wide (450mm) so I couldn't print all the frame in a single piece as my print bed is 254x204mm so I designed it in 3 separate parts which would then screw and glue together.

Fresh off the printer: 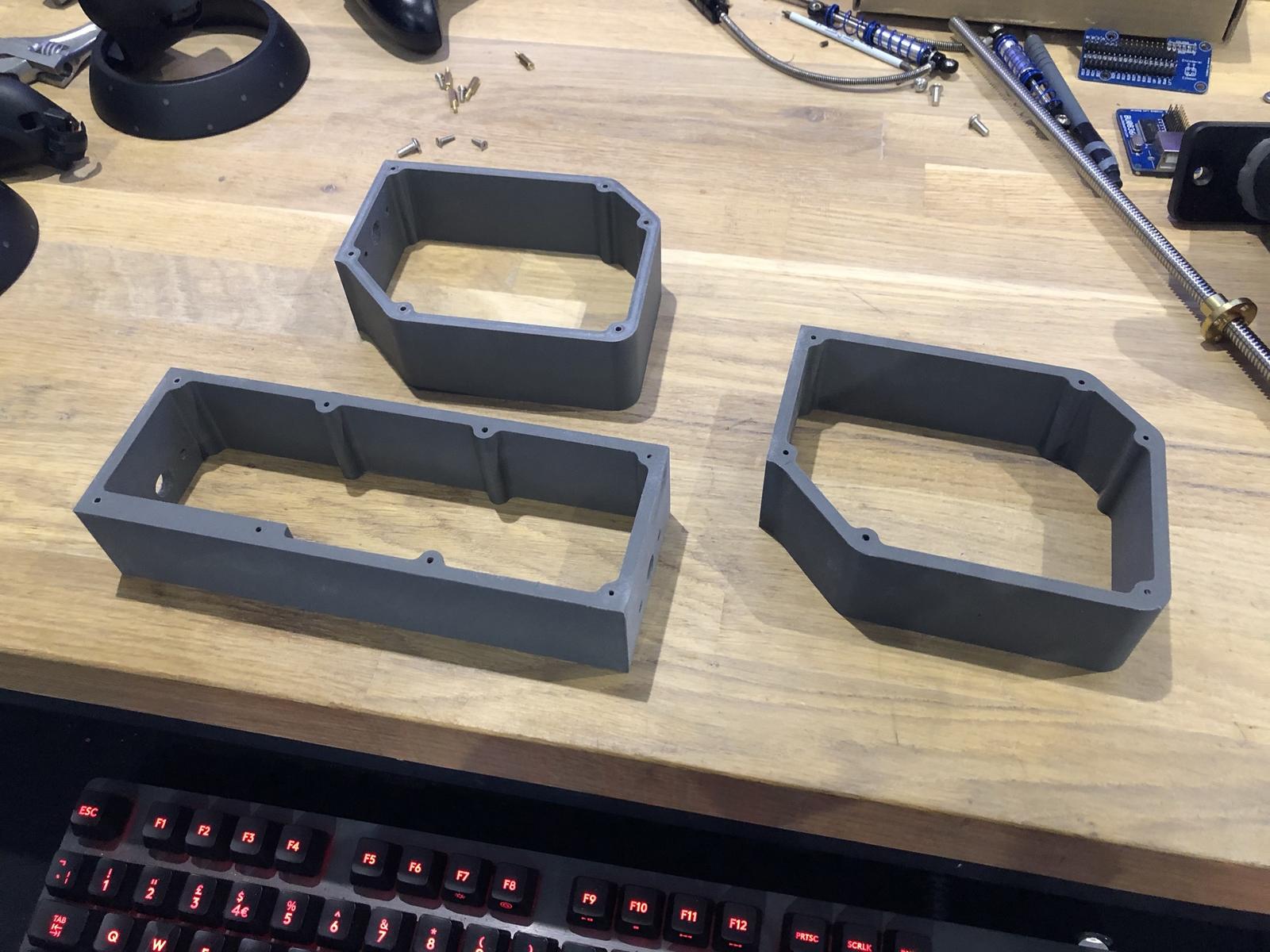 I then bolted and glued it together after sanding the interfacing faces a little to make sure they were nice and flush, filled the gaps and sprayed with filler primer, sanded back wash rinse repeat a couple of times: 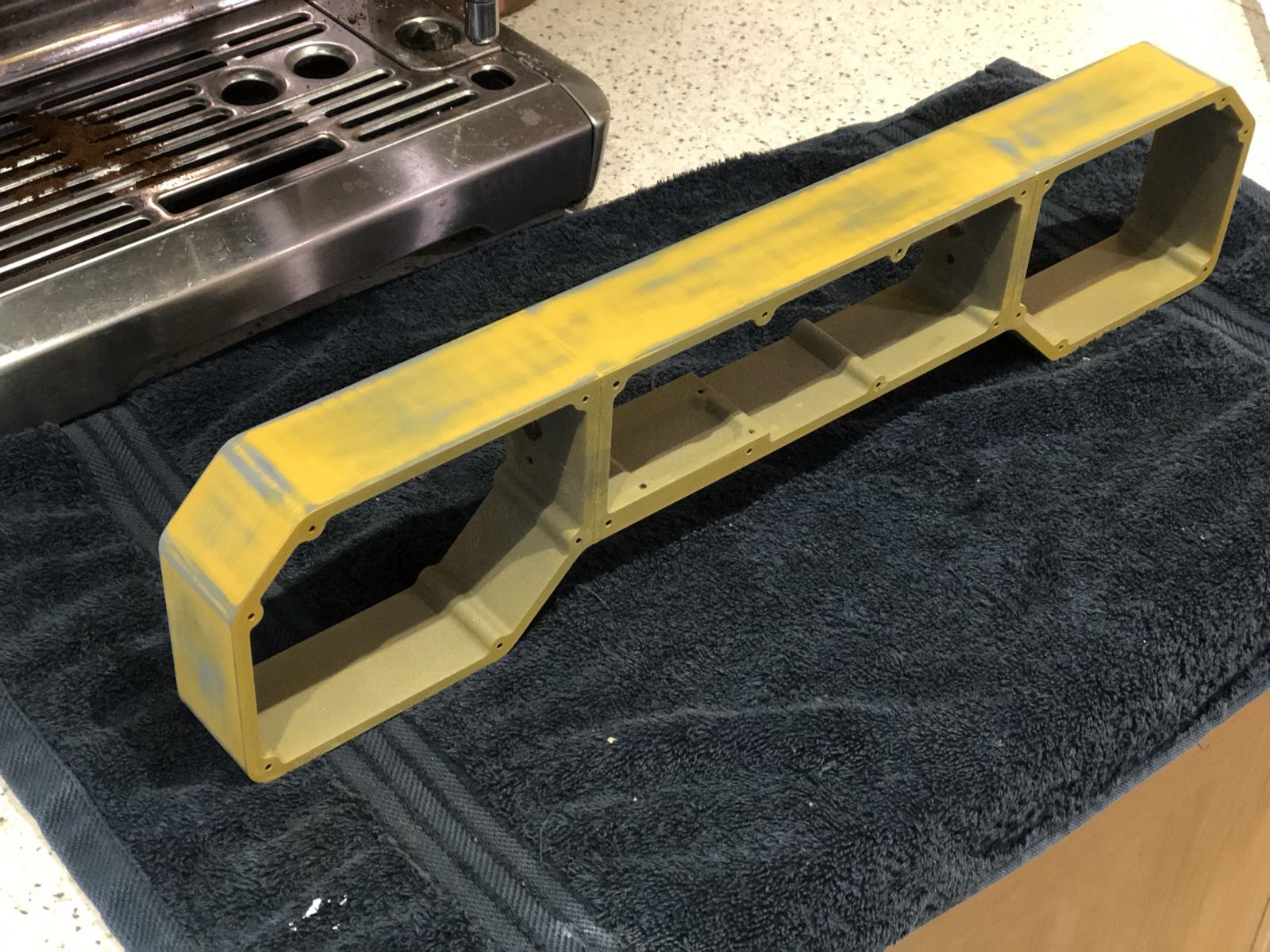 Next up sprayed it with some Audi Dakota Grey from halfarts: 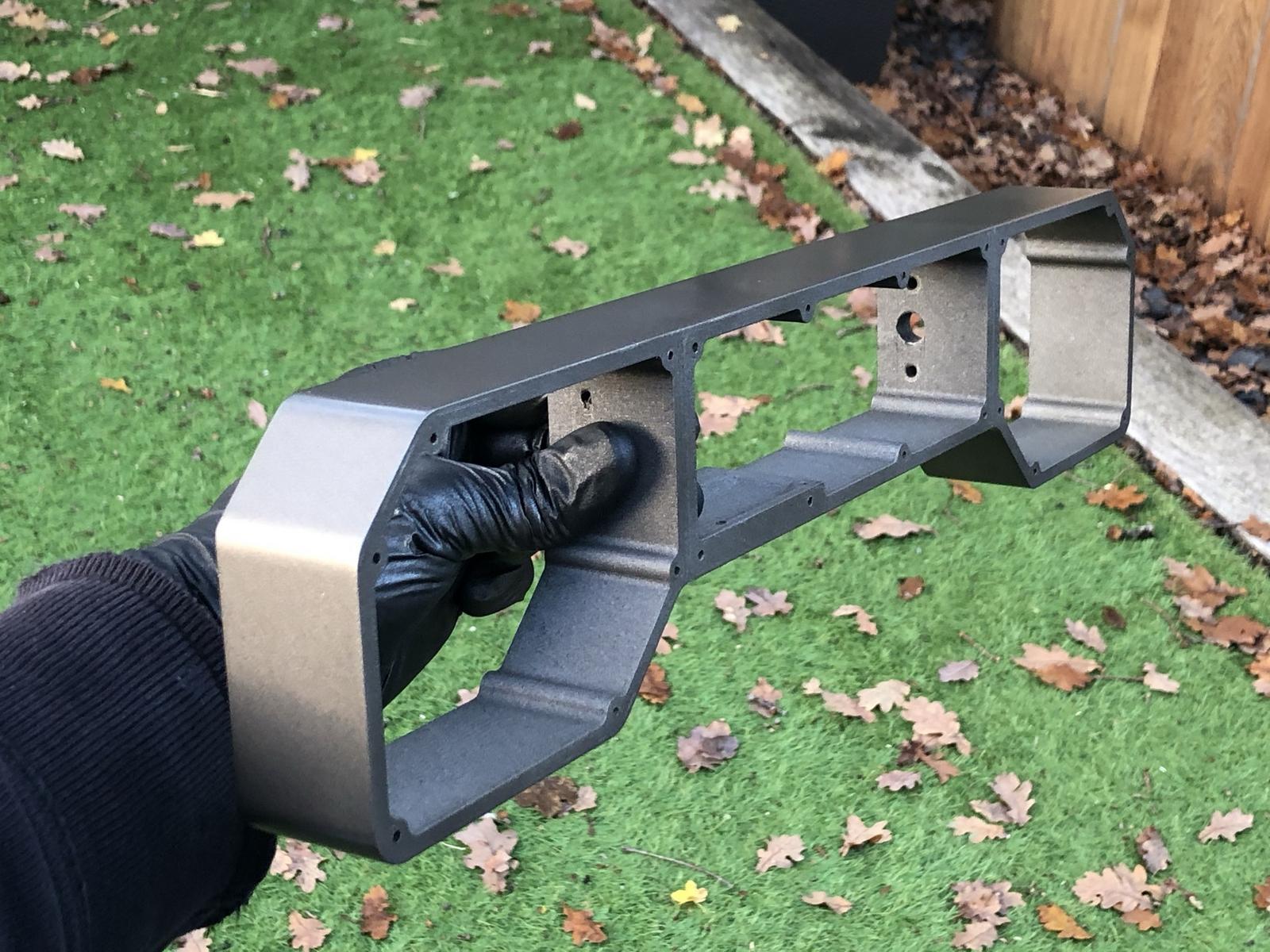 Mounting the electronics, I printed a little m2.5 hex socket thumbscrew tool to help put the standoffs in because I don’t have a socket that small! 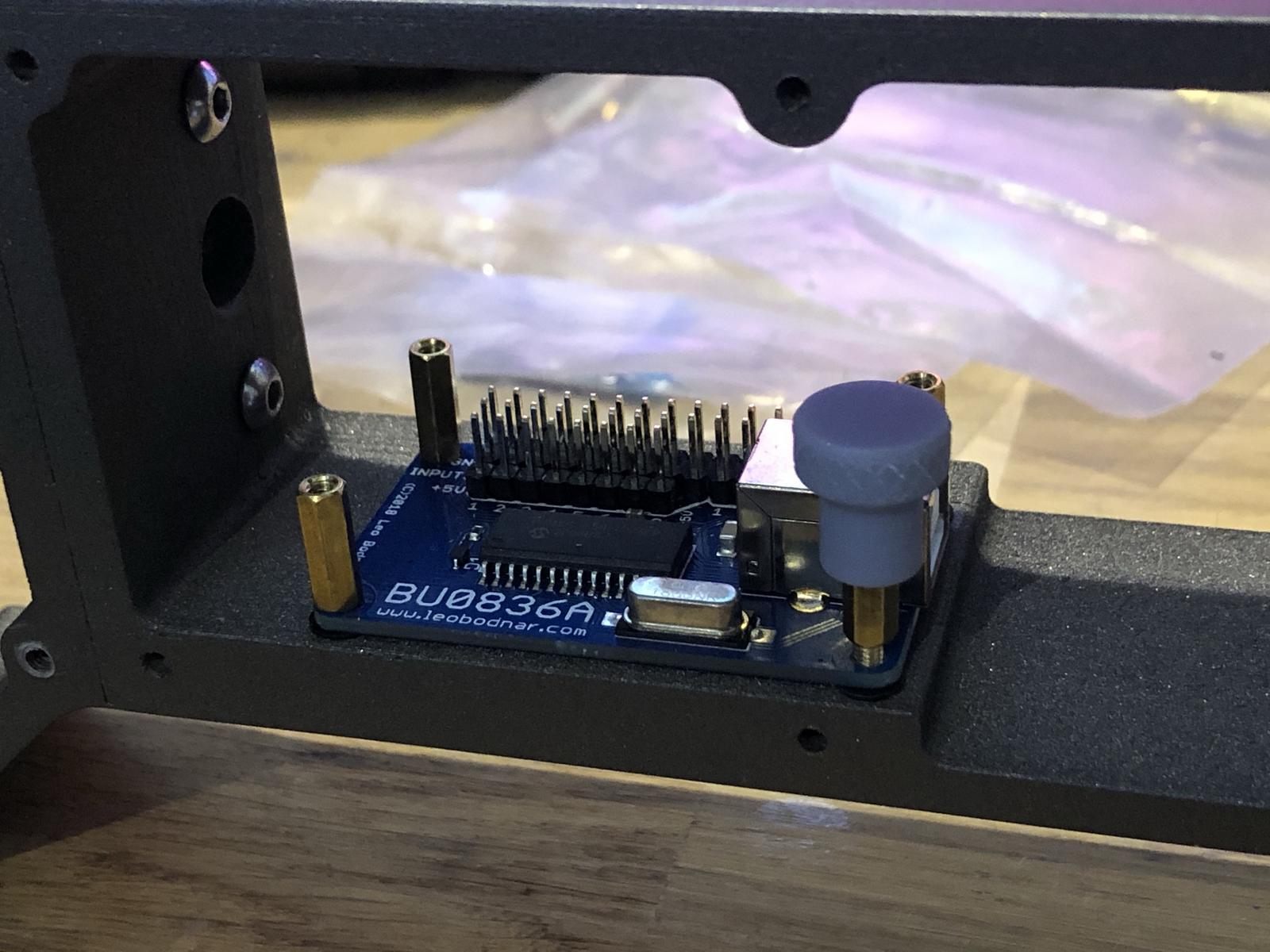 Breakout board mounted on top: 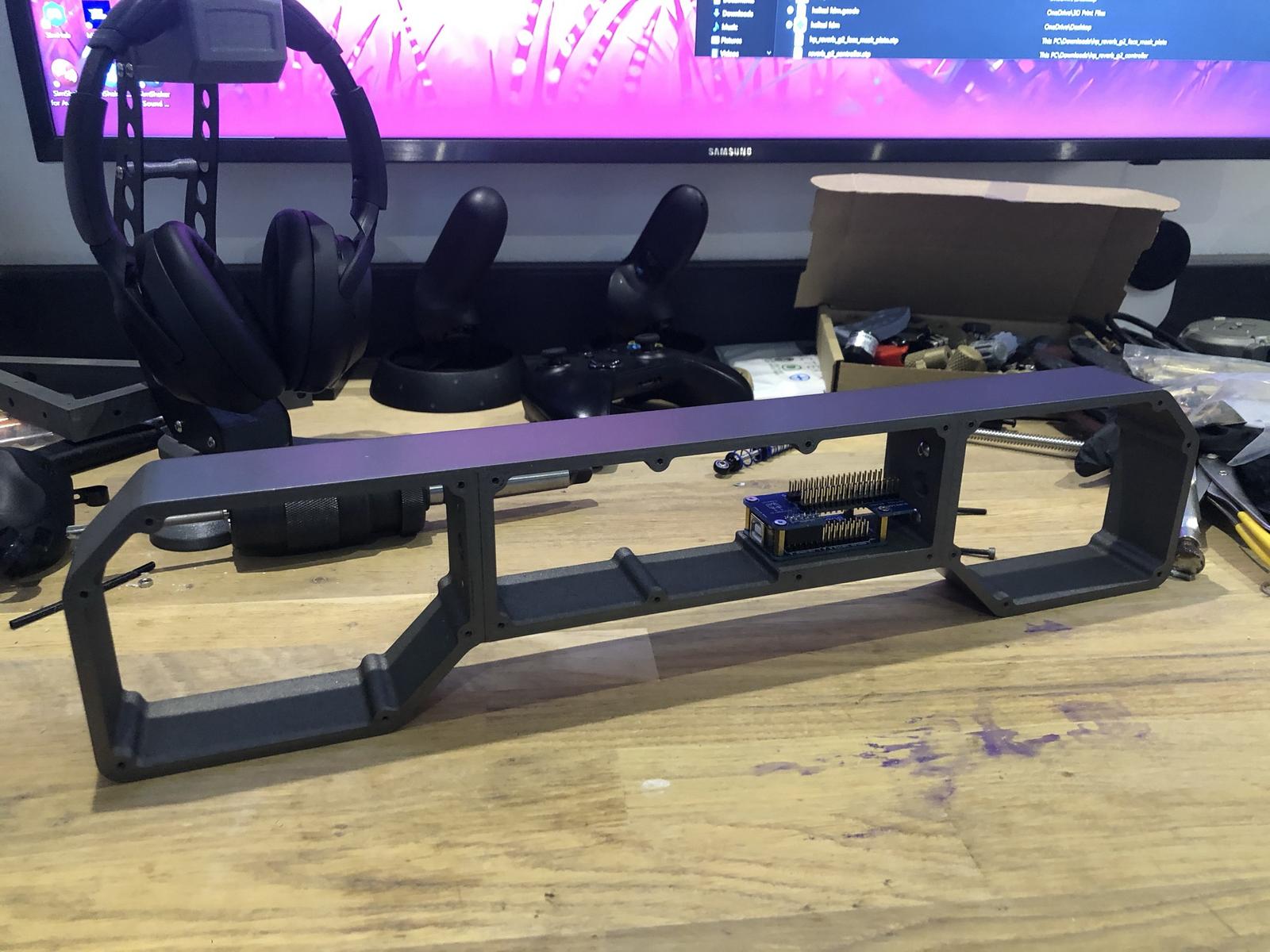 Next it's off to the CNC to cut some 2mm CF sheet... I think I may have a CF addiction, just love it. 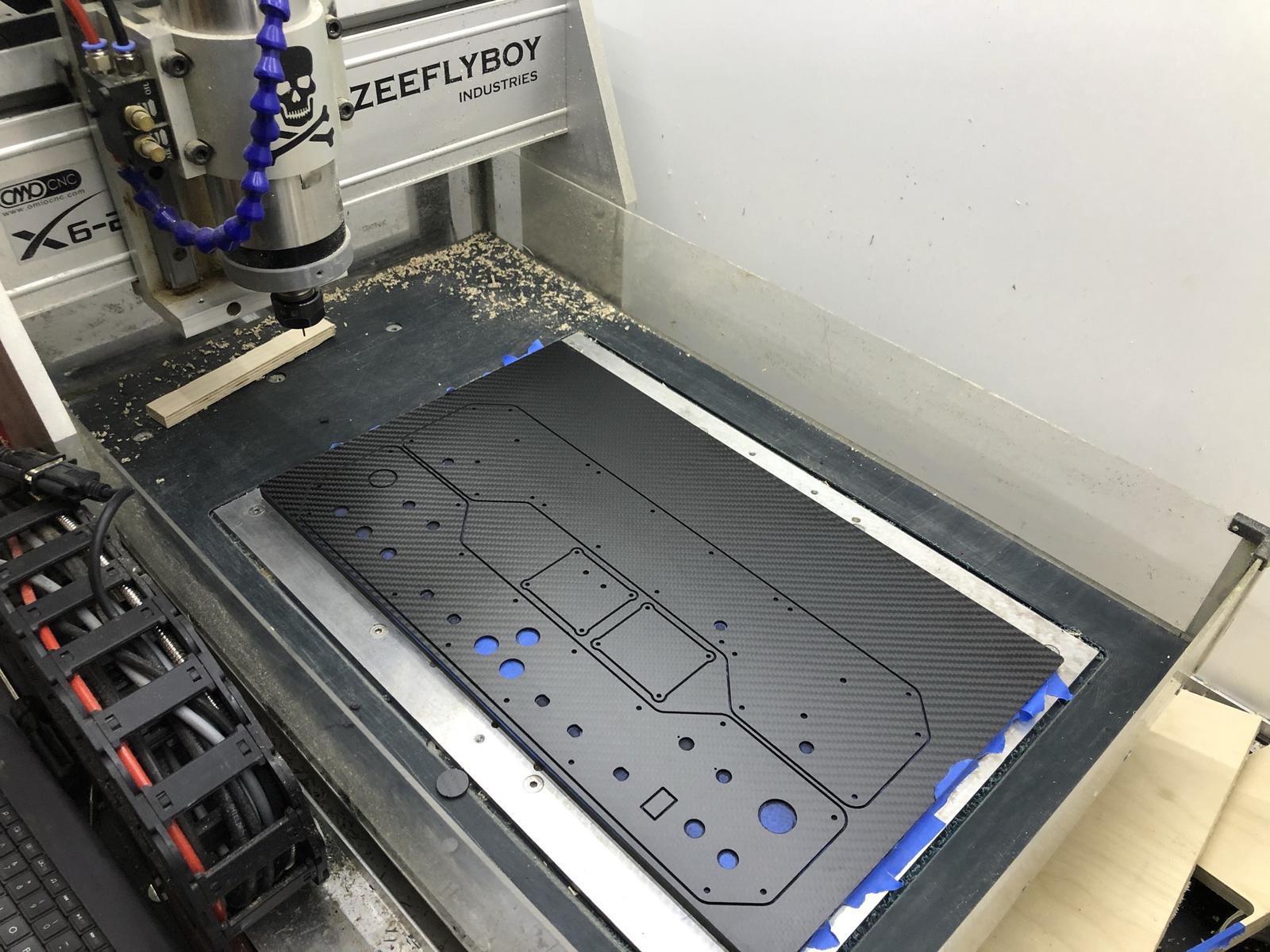 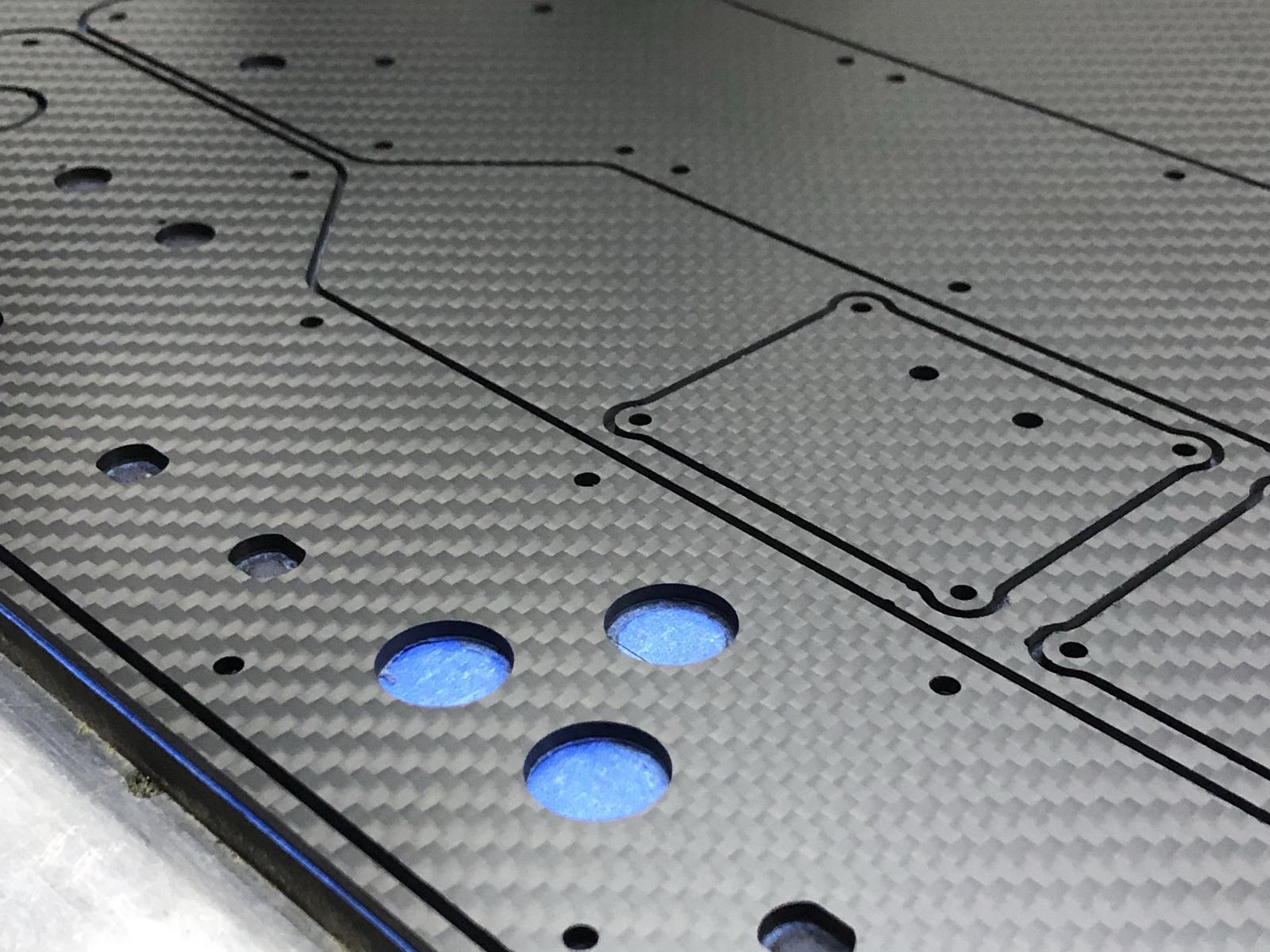 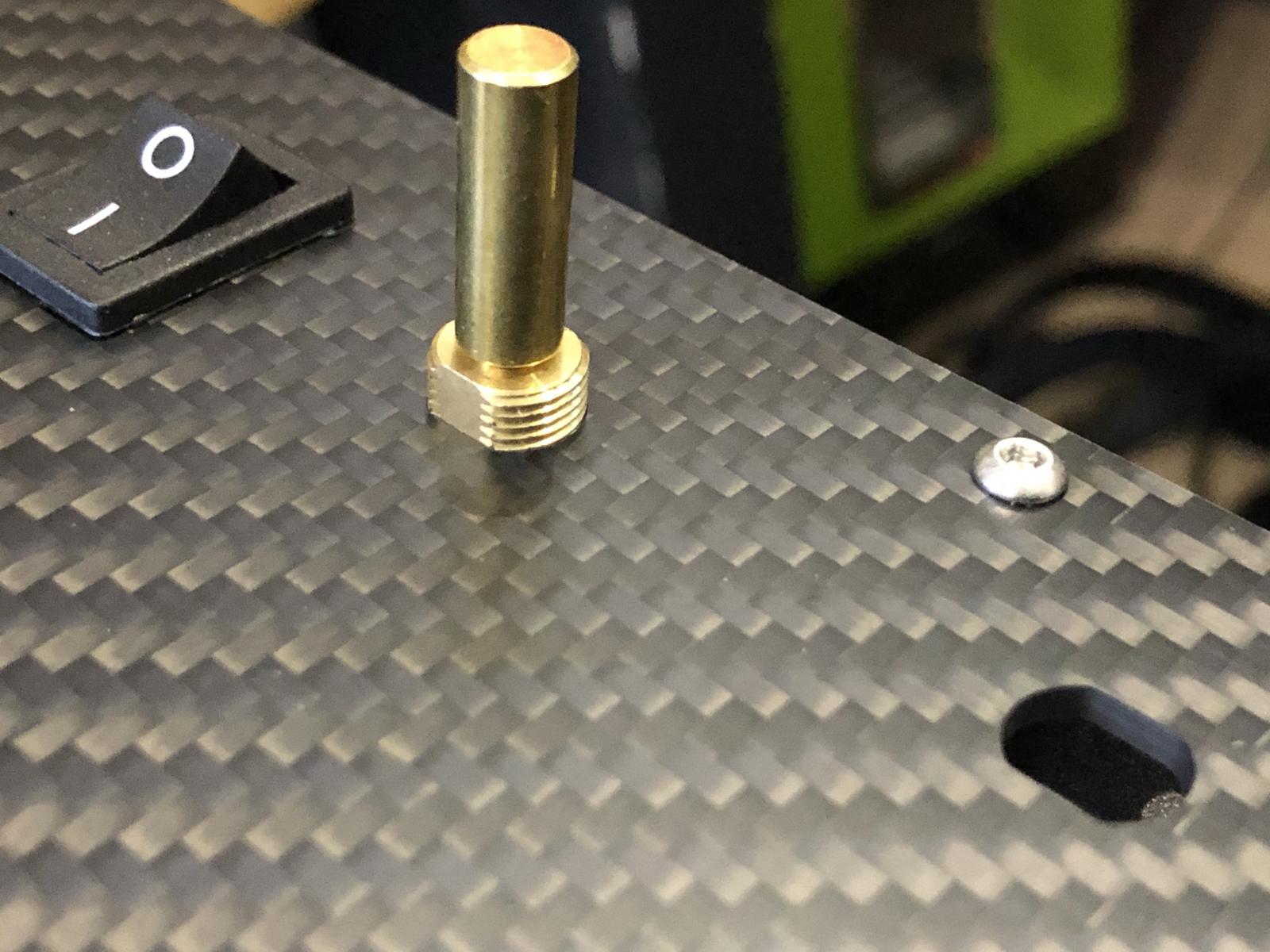 And assembled with some of the switchgear (still awaiting the start button and the square momentary switches in the post): 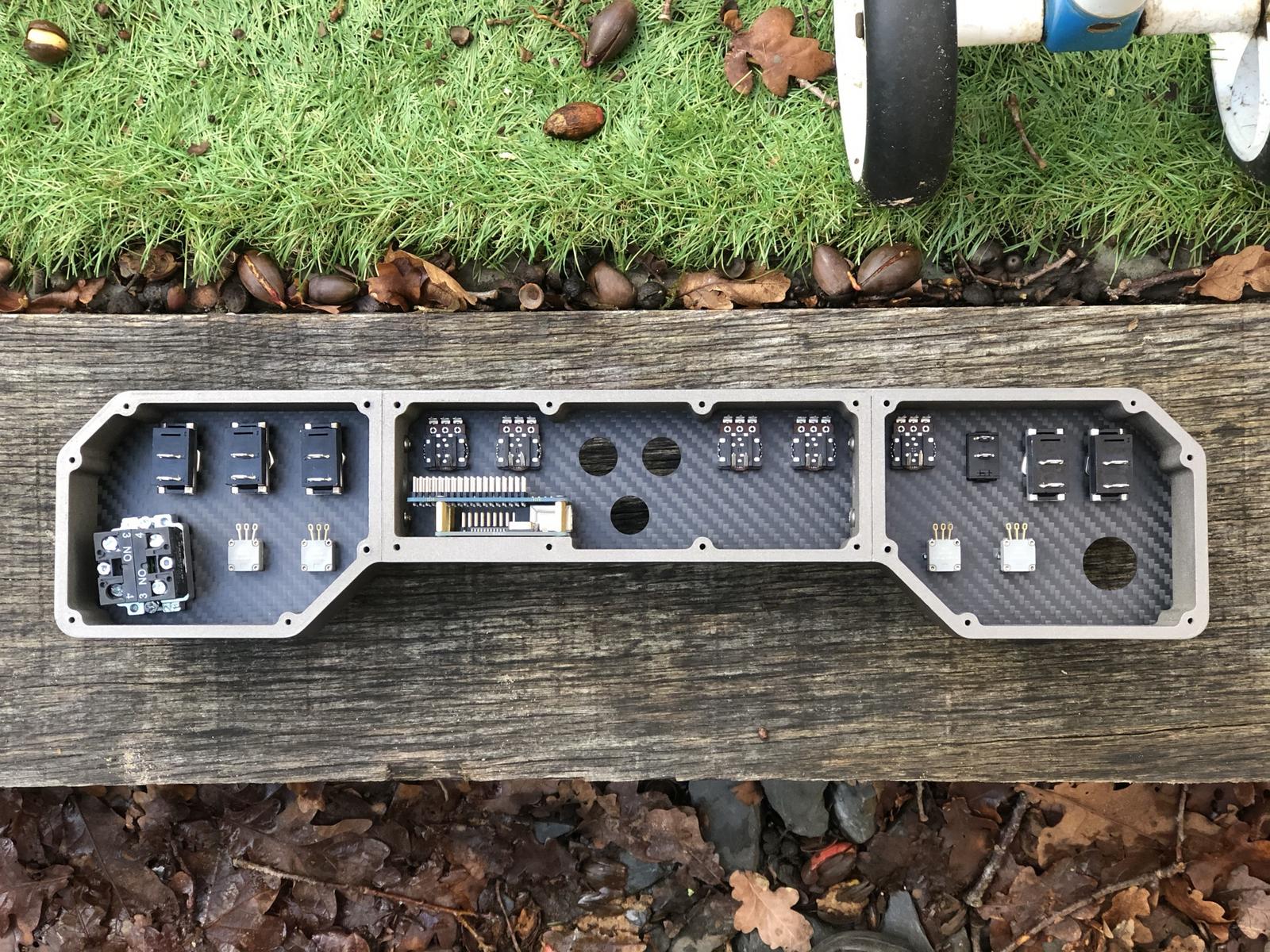 I initially printed the knobs on my normal 3D printer, but I just treated myself to a resin 3D printer for Christmas since you can get such good ones for so little money these days, I went with the Creality LD002-H and the wife got me a wash and cure station for it! So anyway thought we should give it a go and this would be a good project for it. I've been 3d printing for many years but totally new to resin so this is all part of a learning process!

I settled on Siraya-Tech Blu resin which is an extremely tough engineering resin, which I can then paint to whatever colour I wanted.

Here are the full set of knobs plus a few spares, fresh out the printer goop: 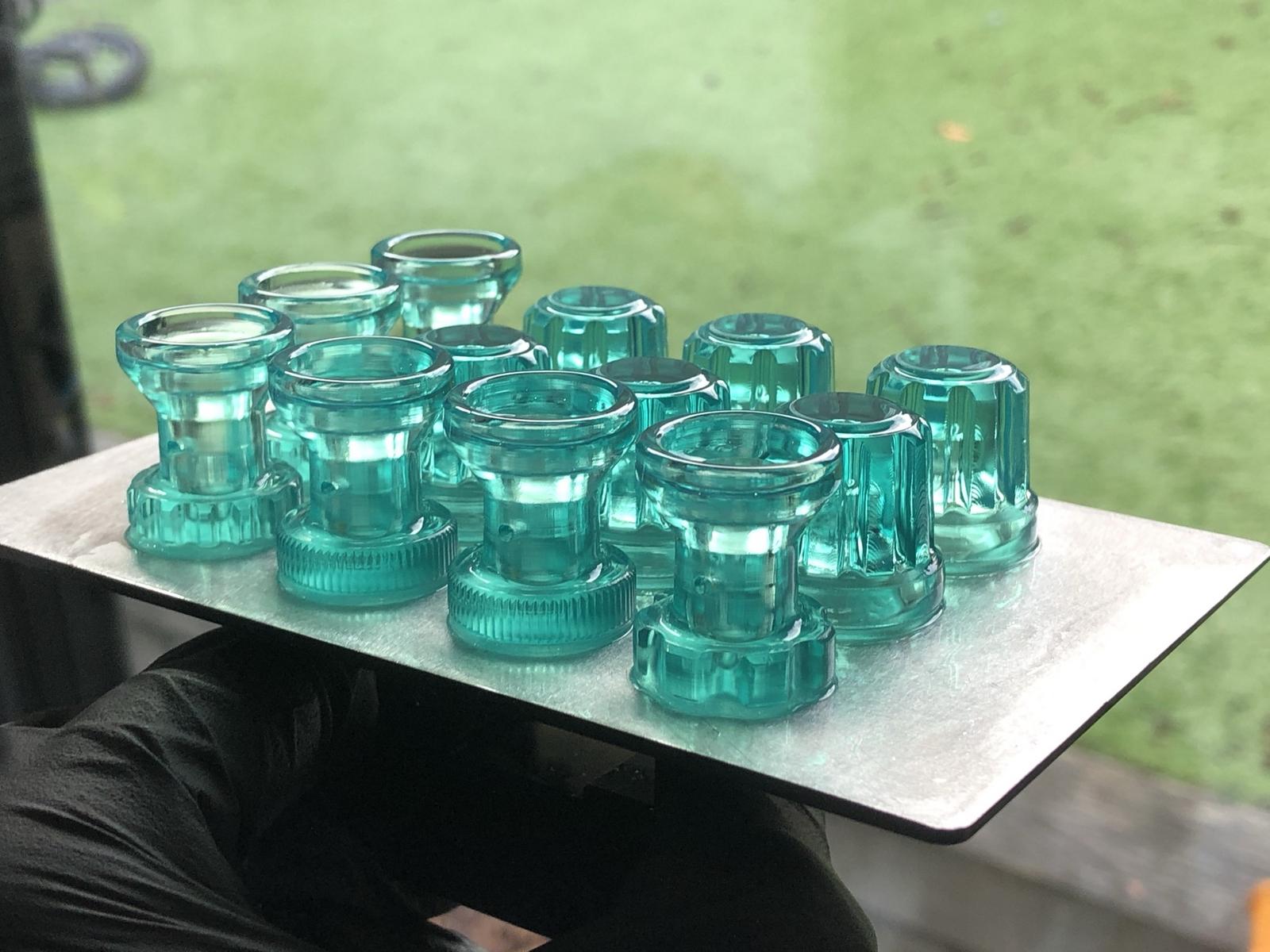 Curing on the turntable in the wash and cure station after having a good clean: 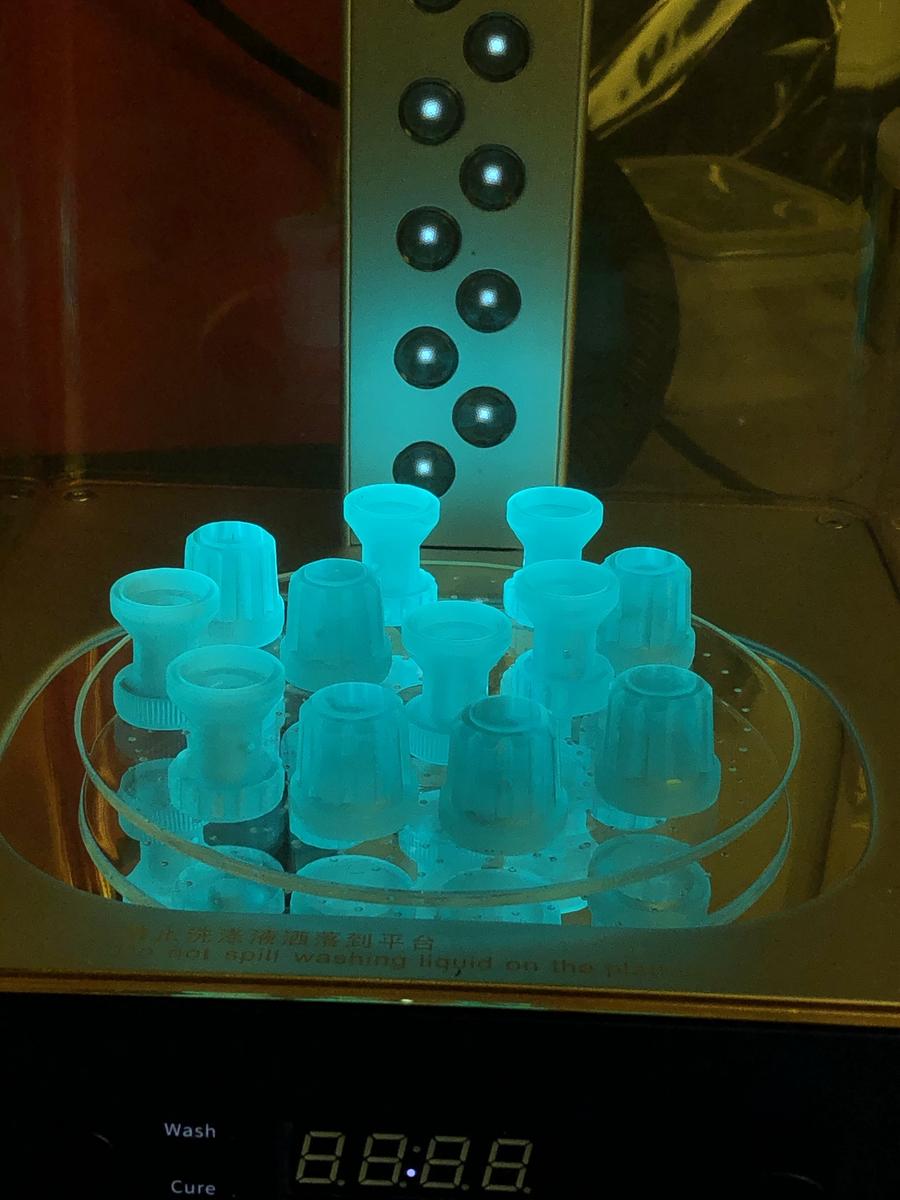 To avoid having to use supports and since these parts are well suited to it anyway I decided to build straight on the build platform. The problem with this is you get a small "elephants foot" where it attaches to the build plate as you have to over cure the resin a little to make sure it adheres. To combat this I just designed in a little extension to the knobs which I then machined off in the lathe. You could sand it off too but this was easier since I have a lathe available! 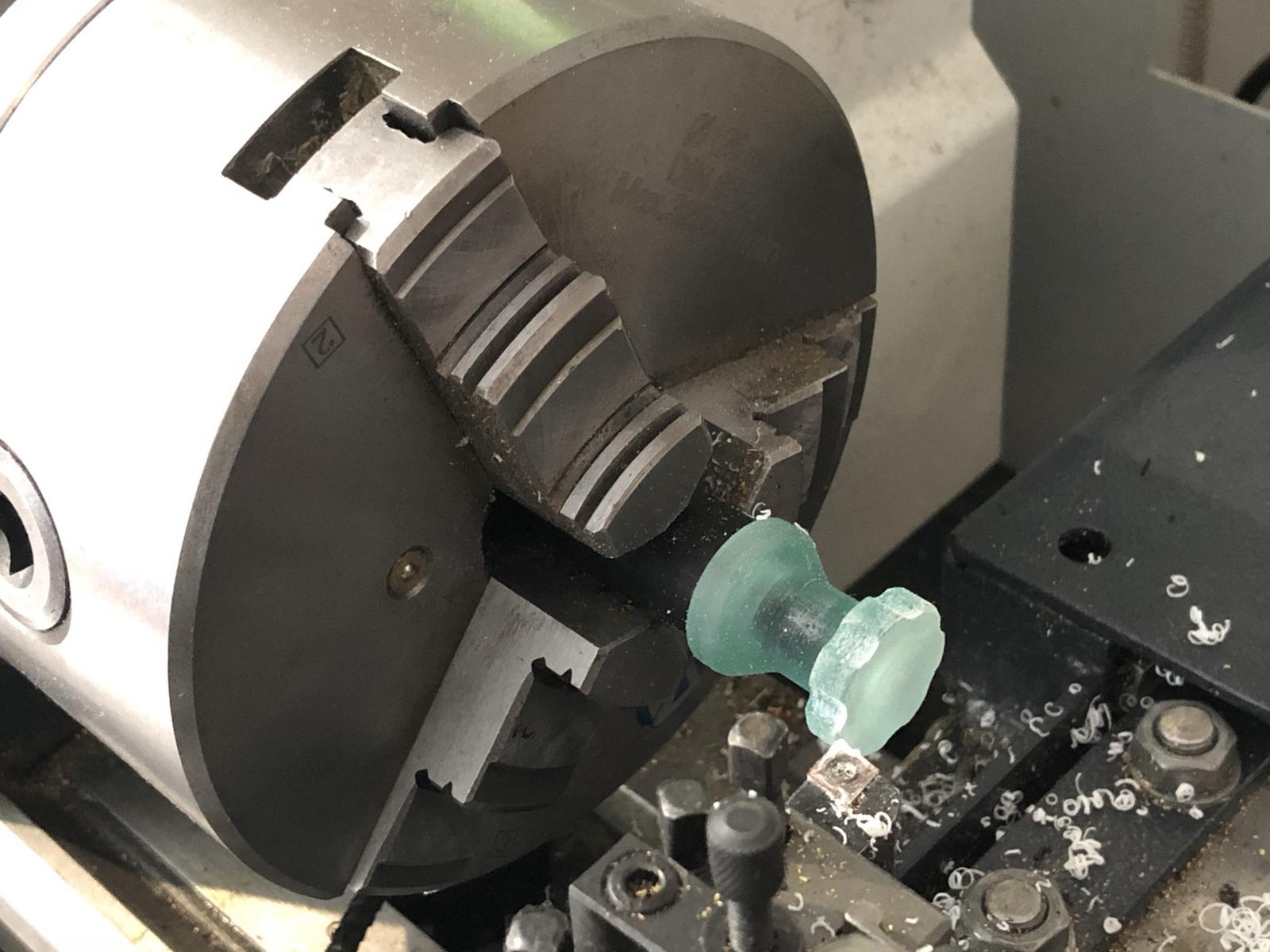 Finished part... it looks a little cloudy, not that it matters since it's being painted anyway but I think I maybe needed to do a slightly better job of washing it first... that said I think it would buff up with some polishing compound and a dremel if you wanted to get the gloss back. 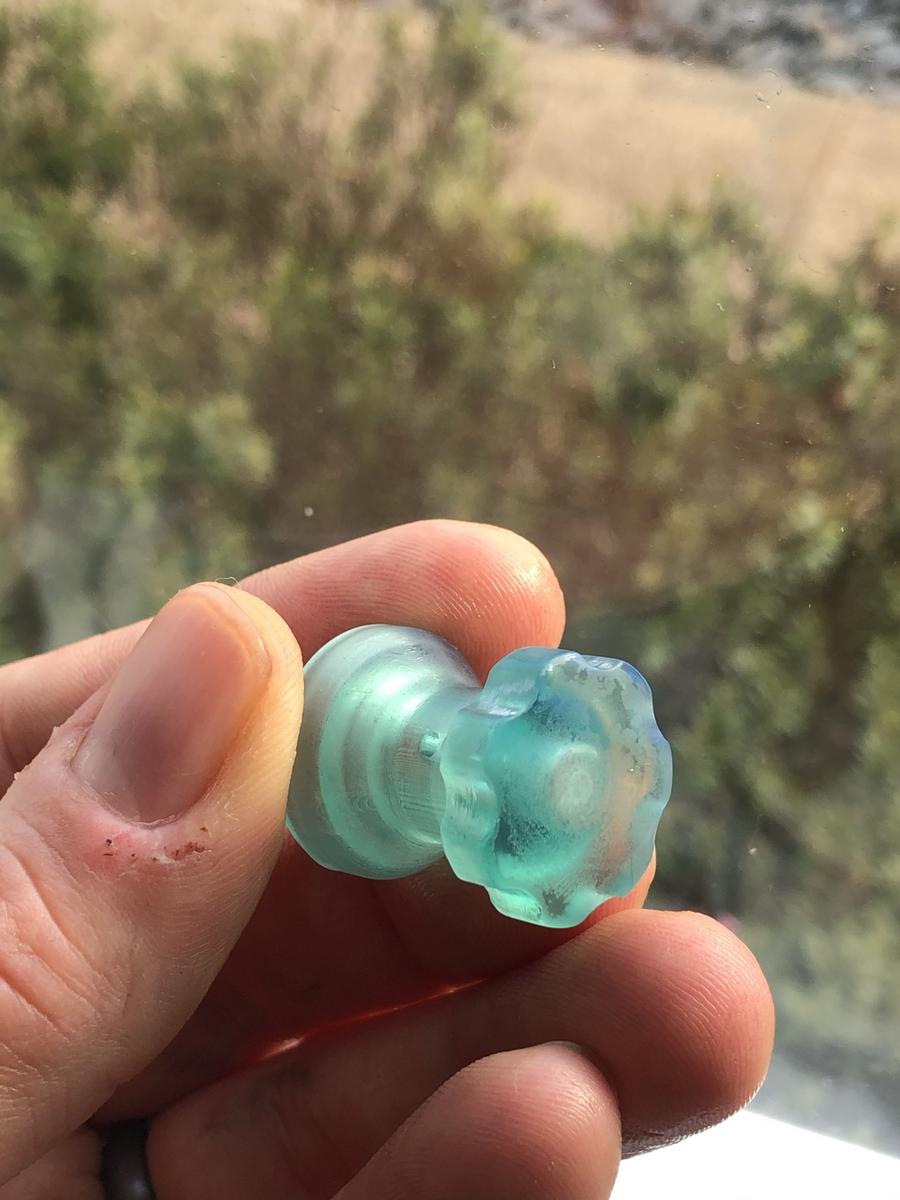 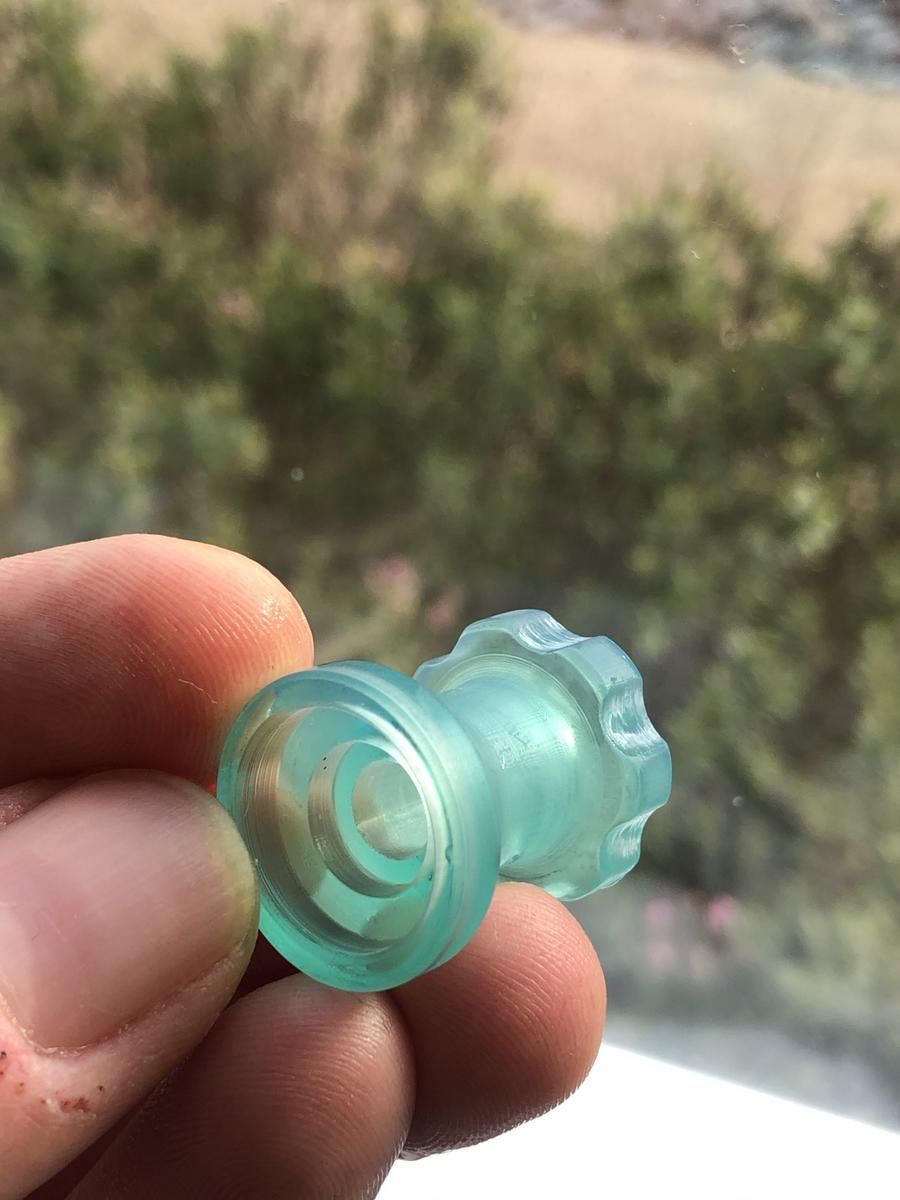 Popped down to the local halfarts and uhmmed and ahhed for ages over colour but ended up getting some polar grey paint which was fairly close to airbus grey and should look good.

Primed with plastic primer, few coast of polar grey and then two coats of satin laquer on top... came out well on the test piece: 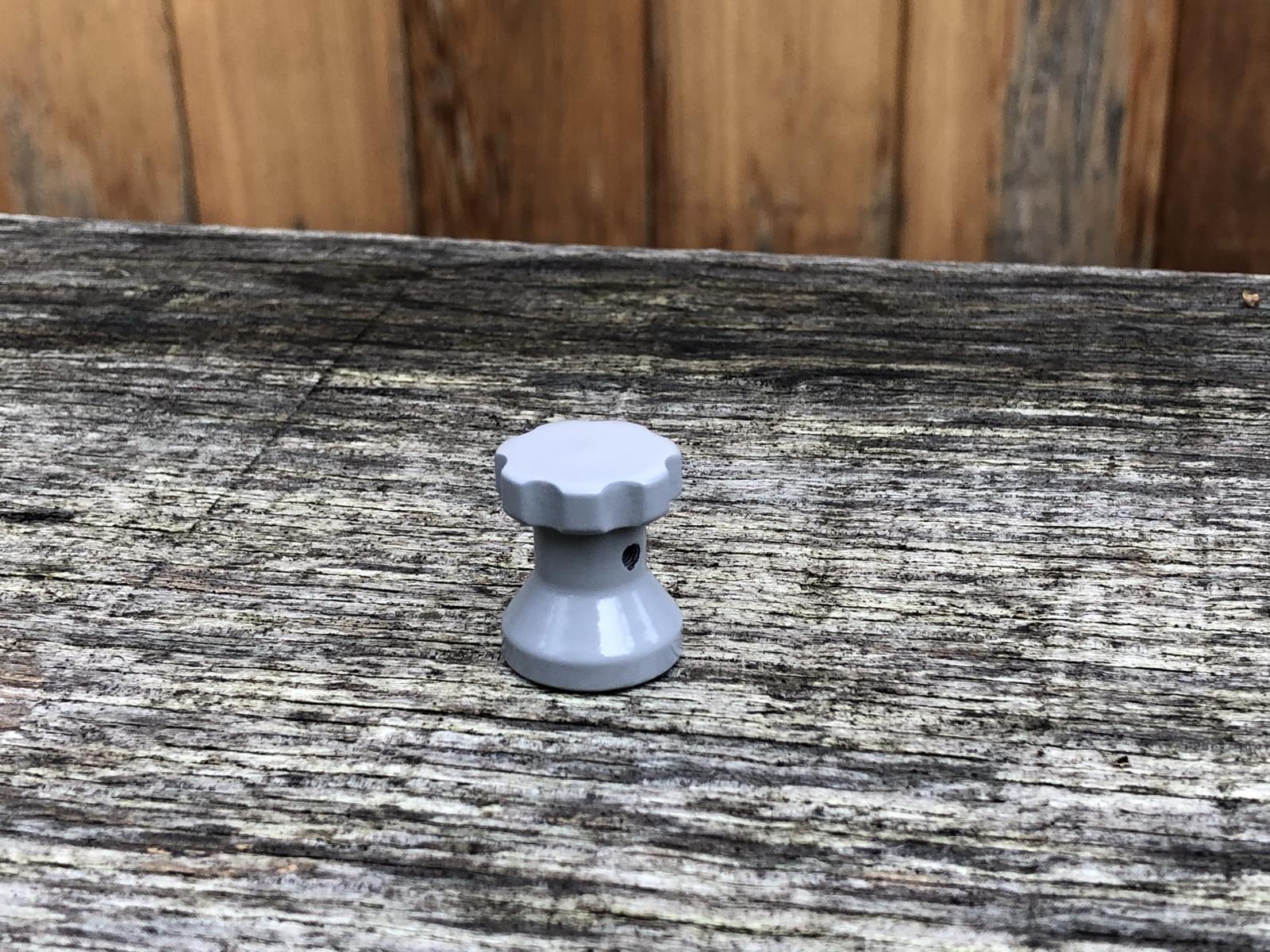 So off to make the rest! I made an impromptu drying rack using my racing rig lol 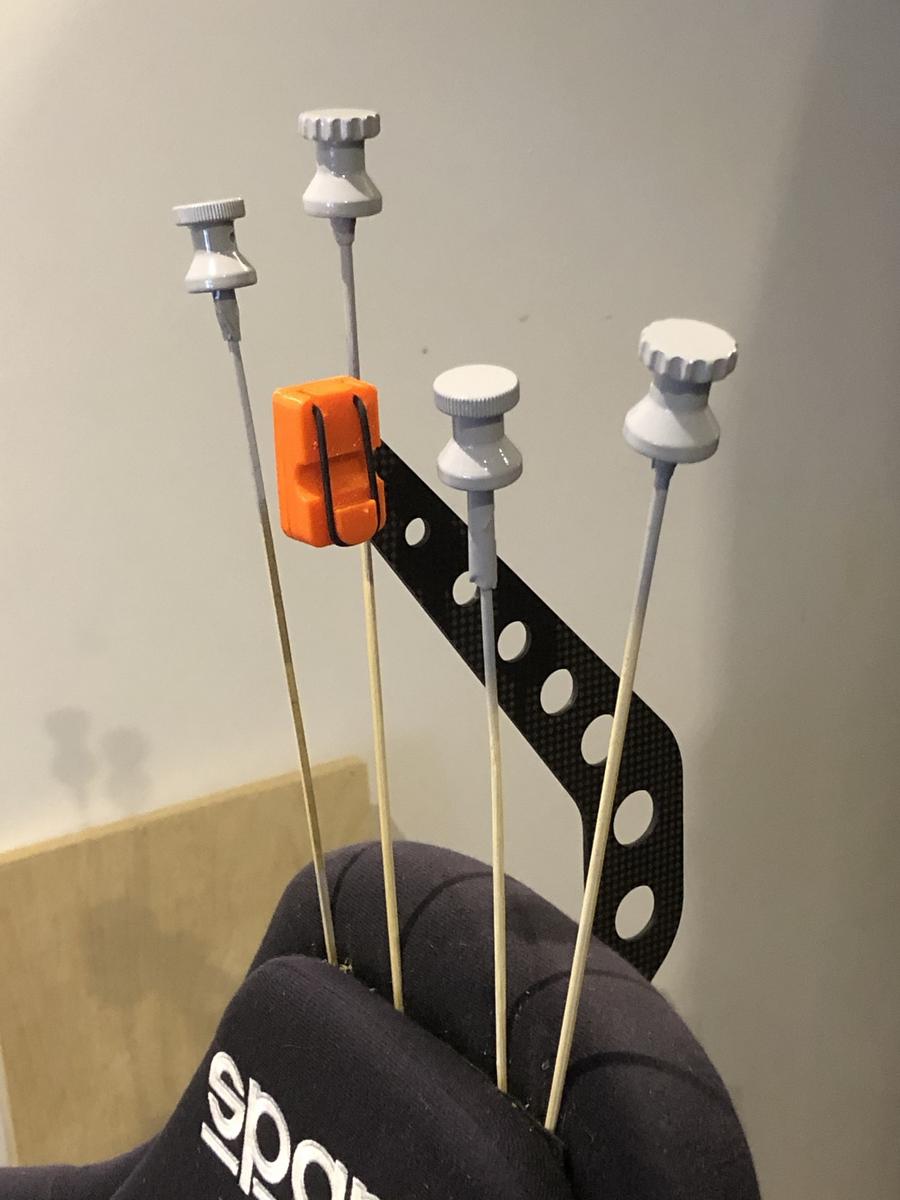 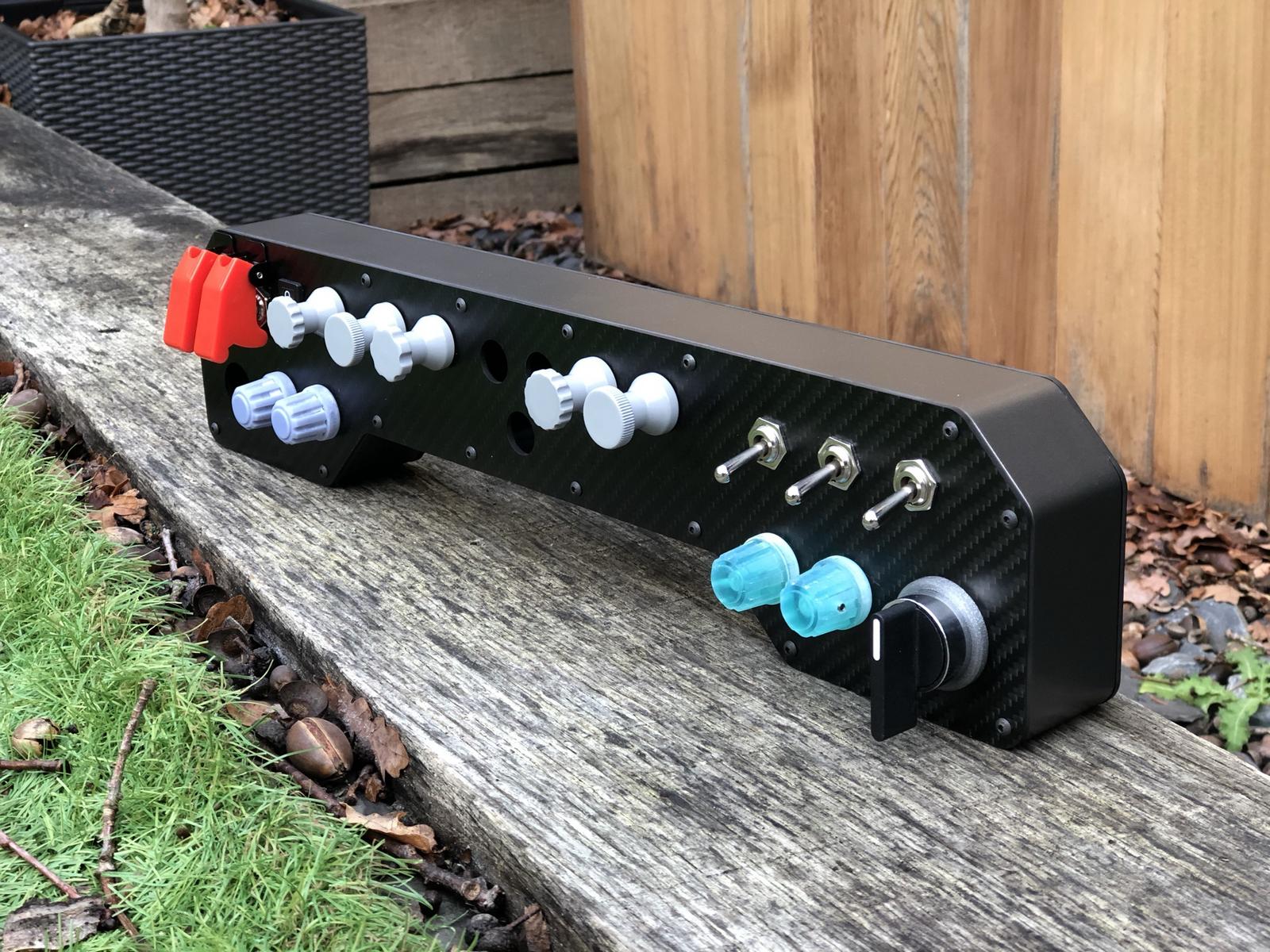 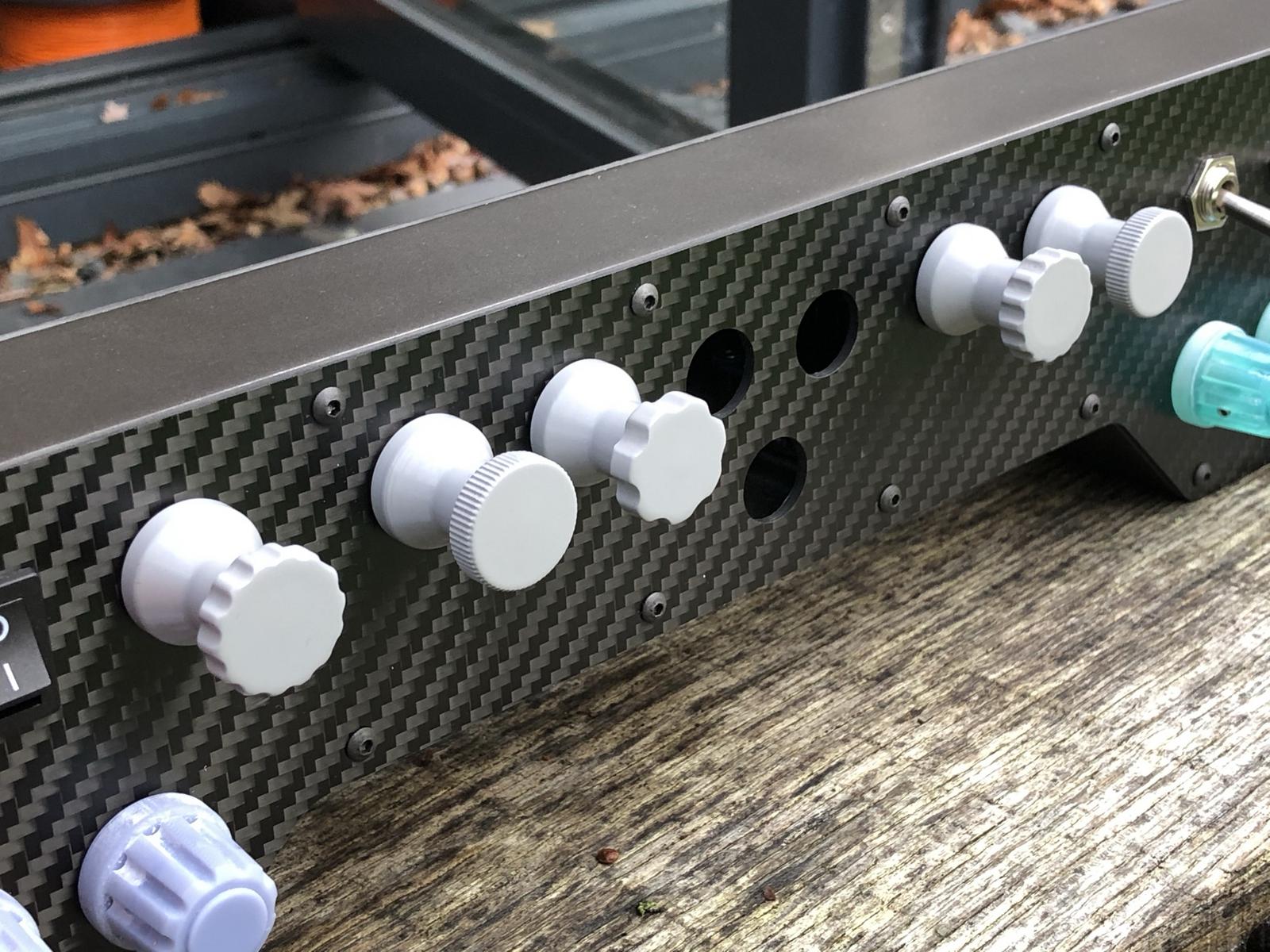 Pretty chuffed with the result there, I think it's safe to say resin printing is a pain in the arse and won't be replacing my FDM printer any time soon but you can't argue with the results.

Wired up and a quick test (sorry for potato video!):

absolutely incredible work.
I tried to catch you on reddit regarding El Beast CNC machine project.
Do you still work on it?

I haven’t for quite a while, but it is a project I need to pick up again soon.

After I’ve done the motion rig I’ll have run out of other immediate projects so will probably revisit the CNC and try to get it finished.

OMG Amazing work. Look the attention to detail and pride!

You have a beautifully crafted knob