What retro things have you done today?

Got this working. Perfectly playable with music
Such an incredible device
Other items are on the way to allow TV out and HDMI to TV

almoststew1990 said:
I guess the problem is you need a fairly expensive motherboard to get 775 with an AGP slot, or a very expensive PXI-E video card that has W98 drivers.

Not necessarily it depends on whats about at the time when searching. Sometimes I can spend an hour to two hours searching ebay for things. I've got a couple of those boards that I bought back in 2019 they were around 25 quid each.

Nah it wasn't that joy stick it was a bit more square at the top.

Guest2 said:
Got this working. Perfectly playable with music
Such an incredible device
Other items are on the way to allow TV out and HDMI to TV

Man I love the psp Go. Well, I thought it was pretty stupid at the time as a psp 3000 owner but I really want one now. It's a pretty great design to be honest. I have a feeling I've missed the boat for getting one at 'obsolete' prices.

How is the analogue stick / dpad location for playing actual PSP games?

almoststew1990 said:
Man I love the psp Go. Well, I thought it was pretty stupid at the time as a psp 3000 owner but I really want one now. It's a pretty great design to be honest. I have a feeling I've missed the boat for getting one at 'obsolete' prices.

How is the analogue stick / dpad location for playing actual PSP games?
Click to expand...

Yeh, probably. I paid £100 for one boxed with all manuals in great condition with two cases and official PSU & charge cable.

It plays all PSX games [you own] natively and they work perfect and look great.

The analogue stick works great for PSP games, PSX games theres a plugin 'POPSAnalogue' to change the stick from digital to analogue mode. It does require a dual shock 3 controller in order to set it, but it works. You also dont need a PS3 to connect a DS3 controller, just use 'Better DS3' and 'Motioninjoy offline' You then use your PC as if it were the PS3

Oddly all the info I can find says that when you connect a DS3 controller via bluetooth, the second analogue stick doesnt work but its fine for me. Motoracer works with dual analogue stick controls. You either use the DS3 or enable POPSAnalogue to use the single analogue stick on the PSP Go.

Items on the way to me are the following

Edit. The component cable arrived today. Surprised to say its a great picture, no small box or jailbars as others have described. This is it left on 16:9 mode

I still have my white PSP Go which i bought way back in 2015. I use my Vita more now as I find it a better form factor and the OLED screen is really nice and Adrenaline allows me to play my PSX games. What's the output resolution in that photo? 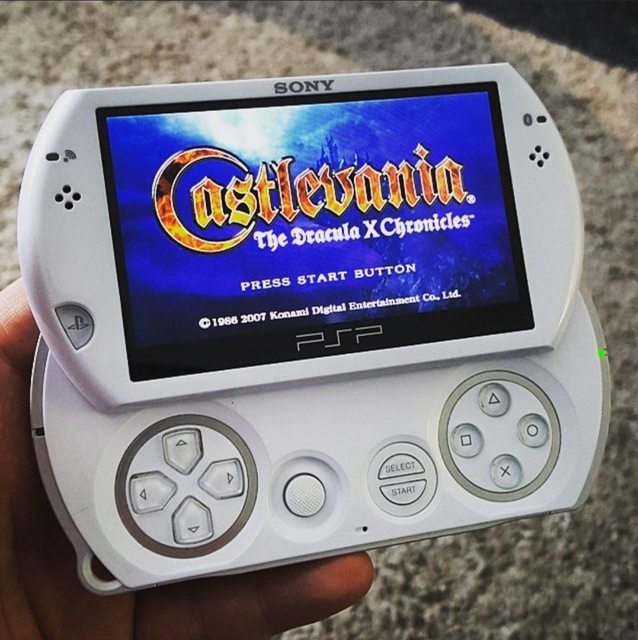 Trying to play a game in Windows 98. It worked first time around after installation but now I can't navigate to start for some strange reason I can only get into options which is no good because I need to navigate to start to play the game. A bit annoying. You get these weird things that happen. I've restarted the game 3 times but same thing happens.

I've been looking at USB drivers for Windows 3.11 I guess its a big ask for such an old OS to see if its possible to read USB Flash Drives in Windows 3.11. That would be very useful for transferring files that are over 1.44 MB. There are three unofficial drivers that might work. I have also found a work around for reading USB flash drives in Windows 95 although it wont read every flash drive, it only needs to read one and then I can make that my dedicated Win95 USB flash drive for file transfers.

cee-S-dee said:
I still have my white PSP Go which i bought way back in 2015. I use my Vita more now as I find it a better form factor and the OLED screen is really nice and Adrenaline allows me to play my PSX games. What's the output resolution in that photo?

Output res is 480p 4:3. Only PSX games stretch to fullscreen. PSP games / programs have a nasty thick black border.
Your white PSP is worth keeping on to. It appears they’re only going up in value

Edit. Now I know why

What you are seeing is a window boxed 480x272, the native resolution of the PSP in game mode. UMD movies and PS1 titles will run full screen, because that content is all full SD / D1 resolution.

The HDMI psp cables on the market now have a scaler that lets you enable a zoom mode for psp games. So the easy fix is to upgrade your cables.

Sony actually did a great job with POPS (PS1 emulator on PSP) that it can be run on 720 x 480 without a performance hit.

I would be surprised if someone hasnt come up with as plugin to stretch the image / zoom it in. Something like a 'software scaler' to get rid of the PSP content borders

edit 2. Sounds like its possible with a plugin called 'FuSa SD' to get rid of PSP content letterboxing.

However FuSa is for older firmwares so another plugin (Time machine) may be needed to allow it to run and it probably doesnt work great compatibility wise.

I was putting my 4600 on eBay but saw there is actually an auction for one right now so I'll wait until that is done before i put mine up for some pricing guidance!

I also really want to do something retro with this...

But it seems quite a lot of money for a fairly unknown case.

I've just been trying out my new old CRT Monitor I forgot how good they look compared with an LCD. I've been having a right nostalgia moment with it. I wonder how it will display with a TV signal going it from a free view box with VGA... it be interesting to see.

Its like I'm slowly getting all my old computer stuff back again. Ahh seeing the Windows 98 boot up logo on a CRT monitor... now that's proper retro living.
Last edited: 2 Nov 2021

I'm building a gaming cabinet with a raspberry pi

I've been watching this interesting video where a modern motherboard is made into a retro 486.

Probably because it doesn't bring anything unique. It's generally less compatible than xp with no real advantages.

Armageus said:
Probably because it doesn't bring anything unique. It's generally less compatible than xp with no real advantages.

XP with the classic theme achieves much of the same but with more benefits
Click to expand...

It’s true. 2000 was a great productivity OS, but as a lot of software and games were still heavily 16-bit or DOS based at the time, game compatibility is quite poor. This ultimately means that for retro gaming (the biggest use case for retro kit, lets be honest) 2000 is pretty pointless.

As @Armageus says, when you get to the point of needing 32-bit gaming and/or multi-cpu performance, you are firmly in the XP era.

For me its not just about retro gaming but also retro computing in general. There is plenty to do on Windows 2000 its almost like Windows XP except Windows 2000 takes a bit more tweaking and that's half the fun. XP holds no nostalgia for me but Windows 2000 does.

There is also plenty to do in Windows 95 with a wide range of cool retro software and games. People want to put Windows 98 on everything without having much understanding of what they are doing and half the computers I saw yesterday are too under powered to be gaming machines like for example a PC with a 133 MHz processor "lets put Windows 98 on it" Sure Windows 98 will run on it but it will be slow and more suited to Windows 95. I wouldn't install Windows 98 on anything over 300 MHz.
Last edited: 4 Nov 2021

Quite a device. With its bluetooth capabilities its possible to connect a Dual shock controller... to play Turrican 2 Amiga version

Coin battery had died on my Tualatin Machine. With the machine open I also too the opportunity to swap out the Yamaha Waveforce with the Monster MX300/DB50XG combo 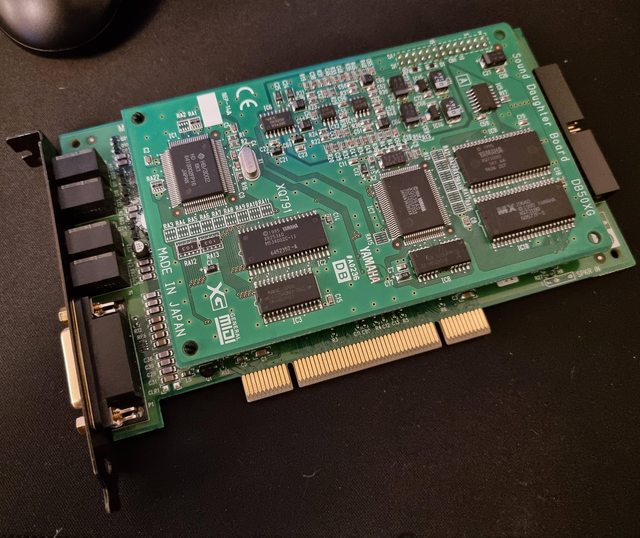 Card swapped out and battery replaced 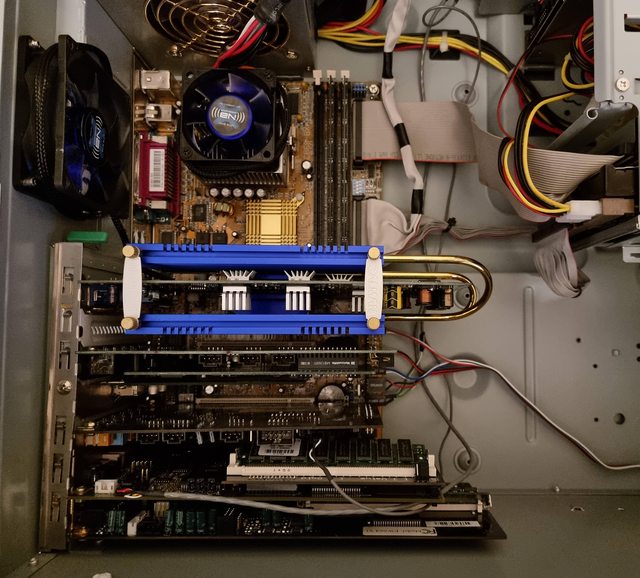 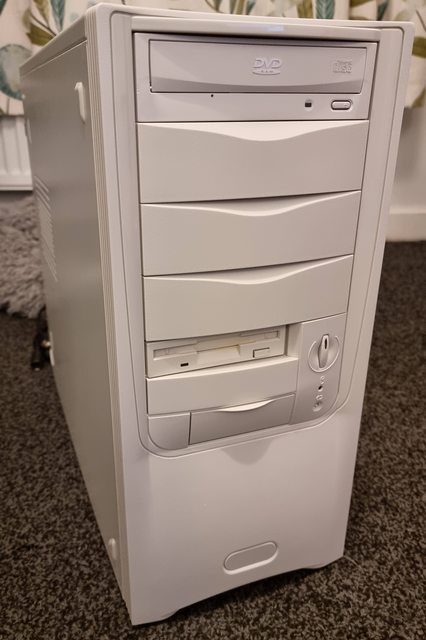 I have another Midi Module on the way. Will post about it when it arrives.

I can't believe it... I found software to play DVD's in Windows 98 SE also works in Windows 2000. Its proper DVD software too none of that demo stuff. I've also finished building a Windows 2000 PC from a dual core AM2 Athlon 64 board in a retro beige ATX case. They said on youtube it was impossible but I did it. All drivers working and it plays all my mid 90s and on wards games. Its pretty decent. I got a CRT on it. I'm glad I found a use for that board retro wise.