Porsche Owners Thread - If you own one or just like or hate them! :)

5 years of 911 ownership! Just treated it to a major service at Zuffenhaus. Have used the car more this year than any other year in my ownership and it’s running very well for it. Topped up 1L of oil over 5,000 miles which doesn’t seem excessive.

Only items on the agenda are a full set of tyres all round, but otherwise it’s a case of adding petrol and enjoying. 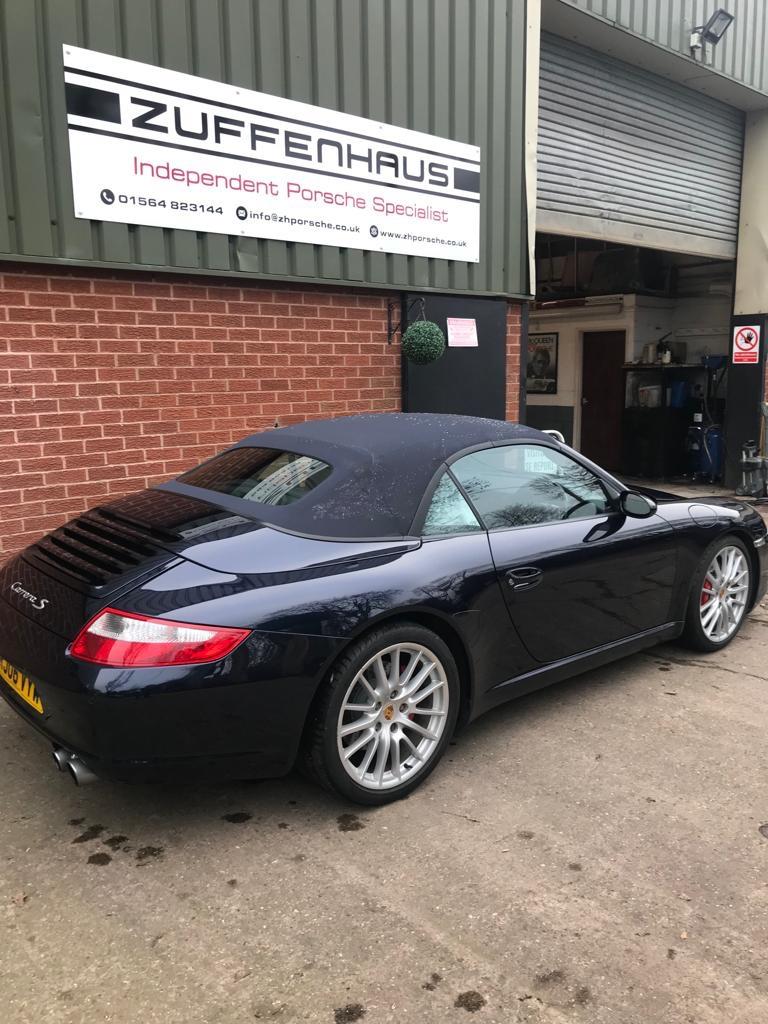 Treated myself for Christmas with a first dip into Porsche ownership. Have been looking at 986/987 Boxsters for the last month or so, finally pulled the trigger on this 987 via a local Porsche specialist. Picked it up just this morning, looking forward to getting to know it better and sunnier days. 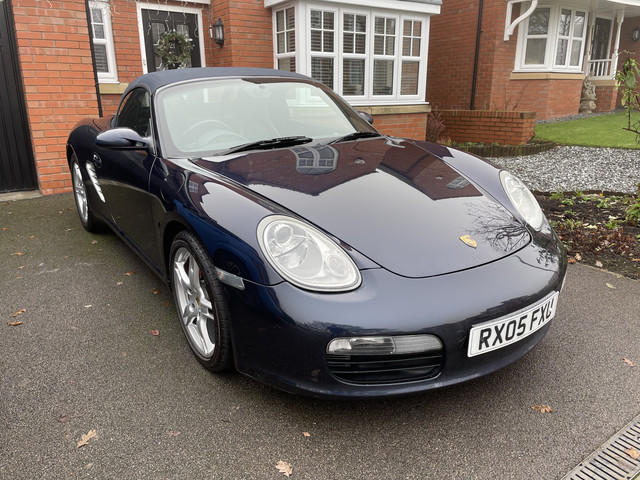 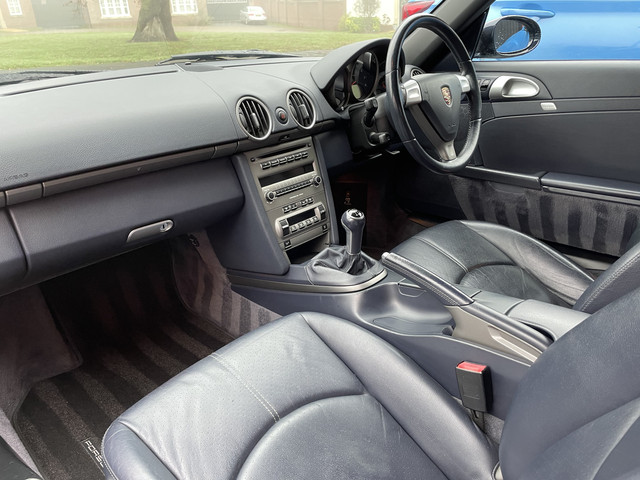 @BaJ - Looks lovely! Best colour too! Was really impressed when I had a ride in my friend’s 987 3.4, went very well indeed. Merry Christmas and enjoy!

any macan owners on here ? looking for the last small SUV before porsche switch over to electric any advise
Last edited: 17 Jan 2022

The 981 has the options I'm interested in (Sport Design Steering Wheel, Sports Chrono, PASM, PSE, ParkAssist Front + Rear, Dual-Zone Climate, 20" Alloys, BOSE, Cruise) and is in the colour I like (Sapphire Blue)...but it doesn't have the full PCM with Nav, only the Telephone Module - and I assume an AUX + USB/12V in the glove box?

My 987.2 has the full PCM with Nav, which I never use, but I recently purchased the Bovee1000 to get Bluetooth/iPod integration which works well. I don't think I would miss the iPod integration, because I would still be able to use a Bluetooth receiver on the AUX, and with the PSE I doubt I would hardly use the stereo anyway!

This will be a long term purchase, but if I was ever in the unfortunate position of needing to sell up, would not having the full PCM with Nav put off prospective purchasers?
Last edited: 17 Jan 2022

In my view the inbuilt entertainment systems just get crapper and more out of date over time no matter what you do, so buying a sports car from a decade ago for this sole feature is a strange thing to do. Depending on the exact version of the PCM you can add CarPlay:

Anyone trying to haggle hard based on such a feature is definitely a chancer.

Long and short, I wouldn’t worry if the spec suits you as it will most likely suit other people as well. As you say, the stereo gets turned off when the PSE flaps are open anyway!

I can’t remember exactly what the full PCM setup offered, but although I didn’t use the Nav much it was a nice to have. You could display the map on the righthand binnacle rather than the central screen, which I thought was kinda cool.

I also had the upgraded sound package and used a USB port in the glovebox for my music. The Previous Cayman S I almost bought didn’t have the full PCM or USB port which for me, was a non starter. These might have been connected, but I can’t remember.

You may not need these, but the next guy might.

nam said:
any macan owners on here ? looking for the last small SUV before porsche switch over to electric any advise
Click to expand...

Location
In the top 1%

As people like @Gibbo keep on at me to not dismiss a GT3 too quickly, I did the only thing I could do which was to find one in stock in my budget and go drive it. I did exactly that today. A 991 4.0 GT3 in white with the clubsport pack (carbon buckets, roll cage, fire extinguisher, possibly some other bits that I'm not aware of?).

I've not driven a 991 GT3 before, and to the best of my knowledge I don't think I've sat in one. GT3RS yes, GTS yes, but not a GT3. I was surprised by a few things about it - firstly given its a GT3 I was a little surprised at how well it soaked up minor bumps, overbanding, cats eyes etc but the bigger bumps did show it up for what it is. Also a surprise, the road noise was significantly worse than I was expecting. Of course, it is riding on Cup2 which aren't exactly a quiet tyre but there's no way I would want to do a long motorway journey in this car with a passenger, having to significantly raise my voice to be heard over the road noise wasn't at all what I was expecting at 65mph on the motorway. Also surprising, parked up next to a 720S it looks absolutely massive. It is taller, longer and "fatter looking". On its own or next to something actually big it doesn't look big but still, something I was surprised about.

The way it drives is of course superb. The car shrinks around you to the point where it almost feels like a dinky toy on the road. The noise from the engine really is great when wound out (and like all 911s, IMO awful at idle/low RPM). Steering is great, the weird front end thing somehow didn't manifest itself on my drive out but then again I was on Cup2 tyres on 3-4c roads in someone else's car so I wasn't exactly testing the limits of handling. The interior is somehow both totally boring at utterly amazing - so well built, functional, well thought out. Getting into and out of the buckets was quite easy although the spring-loaded adjuster is a bit of a pain from outside the car.

I think if I had deep enough pockets to buy a GT3 as a third or fourth car I would jump at owning one, but as a car I need to be able to use for all my combined "fun" driving (European road trips, weekend trips, Sunday blasts) this isn't going to cut it sadly.

Test drove the 981 mentioned above yesterday. It looked stunning, had been screwed together a bit better than the 987, and obviously you could sense the improvements in refinement in the newer platform. First time in a PDK, was very impressed but ultimately think I would miss the manual, given its a second car. The driving modes offered by Sport Chrono sharpened things up a bit, and the PSE sounded lush, but on the way home (i.e. driving them back to back) I was left feeling somewhat…underwhelmed. I don’t mean in it a bad way, just by comparison to what I already have, if anything that shows just how good the 987 still is. If money were no object, I’d have one tomorrow and not think twice about it - but right now, 987 on the drive and 25k in my back pocket seems more sensible. If I treat the current one to a bit of TLC, and retrofit PSE, I think I’ll be just as happy! With that said, when decent 981’s come down to 30-35k, it’ll be a no brainer to upgrade!
Last edited: 23 Jan 2022

Got some new boots

May I ask your thoughts on the number of previous owners on a car I'm interested in.

Is this likely to have been bought by flippers or those who kept for a year to chop in against another model etc? I doubt the dealer will give me too many details but wonder also if it might have been a mechanical problem car?

magicoi said:
May I ask your thoughts on the number of previous owners on a car I'm interested in.

Is this likely to have been bought by flippers or those who kept for a year to chop in against another model etc? I doubt the dealer will give me too many details but wonder also if it might have been a mechanical problem car?

From what I've been told when i bought my 997 that basically yeah owners will have it a year then sell on.
That said 4 owners in under 5 years is a bit of a flag, maybe dig deeper into the receipts/history. Also surely one of the 4 owners actually drove the car? Check MOT history/mileage.

Check who they actually are, could be dealers or very short term owners who had to buy it to get something else. Not unusual for cars that expensive to have many owners tbh, I wouldn't worry too much assuming the rest of the history and condition is tip top.

On a side note I love that the dash shows actual temperatures not just a cold/hot gauge. Real eye opener to see how long the oil in my GT4 stays really cold, it was 1c this morning and barely 20c a couple miles later. Really takes 5/6/7 miles to get up to 70-80c when full beans is allowed.

The new boots are on, wow, didnt realise how terrible the old ones were, they had hardly any wear on them but were dated 2015 and been sat around a lot, feels so much smoother now, when Center Gravity were setting it up they concluded the vibration had to be from the old tires as everything else checked out.

Speaking to the dealer, there have been changes of plates at 3 months, 9 months, 4 months, 10 months and a year of respective ownership. I would be the 5th owner apparently.

Its had a major service done by the current dealer and 2 new rear tyres fitted as one had a nail in it and the other was circa 3mm. Fronts are both 6mm.

Going to see it tomorrow so we shall see more then
Last edited: 27 Jan 2022

As long as the history has been maintained I wouldn’t be all that worried about previous owners. Especially with a car so new as it’ll be under Porsche warranty so should be trouble free. Of course it’s nice to have a single previous owner, but high performance cars are often flipped or probably in this case bought to get a leg up on the GT or 992 waiting list. I noticed a house down the road had a exchanged a 991 turbo cab for a 992 S cabriolet. I thought it was a very odd move until the brand new 992 turbo cab appeared pretty soon after UK launch.

SupraWez said:
The new boots are on, wow, didnt realise how terrible the old ones were, they had hardly any wear on them but were dated 2015 and been sat around a lot, feels so much smoother now, when Center Gravity were setting it up they concluded the vibration had to be from the old tires as everything else checked out.
Click to expand...

This is high on my priority list for this spring. Want to get a full set of PS4S on there. Quite exciting as it’ll likely feel like a new car! Glad it’s been a worthwhile change!

tom_nieto said:
This is high on my priority list for this spring. Want to get a full set of PS4S on there. Quite exciting as it’ll likely feel like a new car! Glad it’s been a worthwhile change!
Click to expand...

I wanted the PS4S but couldn't get the rear sizes anywhere and needed a complete set so ended up with the cups instead.
You must log in or register to reply here.
Share:
Reddit Pinterest Tumblr WhatsApp Email Share Link
Top Bottom